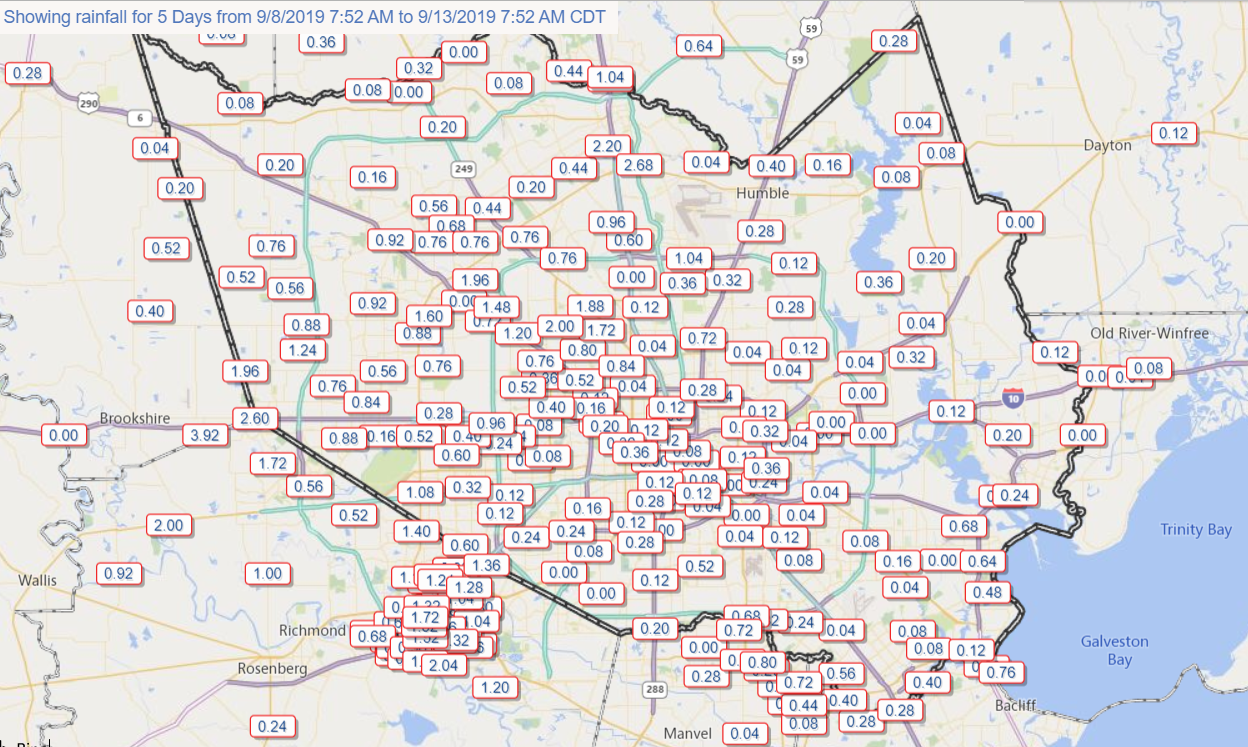 Feast or famine in the rain department over the last 5 days. Some places have seen 2 to 3 inches, while others have seen next to nothing. (Harris County Flood Control)

Apologies for the map that is clearly excluding some parts of the area. If you’d like a bigger view, you can view recent rain totals at Harris County Flood Control. Amounts of up to 2 inches or so have occurred near Acres Homes, Sugar Land, and out by Katy, with higher amounts in a few spots near there. Then, you have spots like the East End, far northwest Harris County, and some pockets south and also northeast of Houston that have registered little to no rain at all. For those seeking rain, we’ve got nothing good to report for the next couple days.

Today and tomorrow should be fairly straightforward forecasts. We should see ample sunshine and hot temperatures. Look for daytime highs in the mid- to upper-90s both days. Nighttime lows into Saturday morning should get to the mid- to upper-70s. If we’re looking for a bright spot in the relentless heat, it’s that the nighttime temperatures and humidity levels will not be terribly oppressive. Heat index values should be mostly under control. 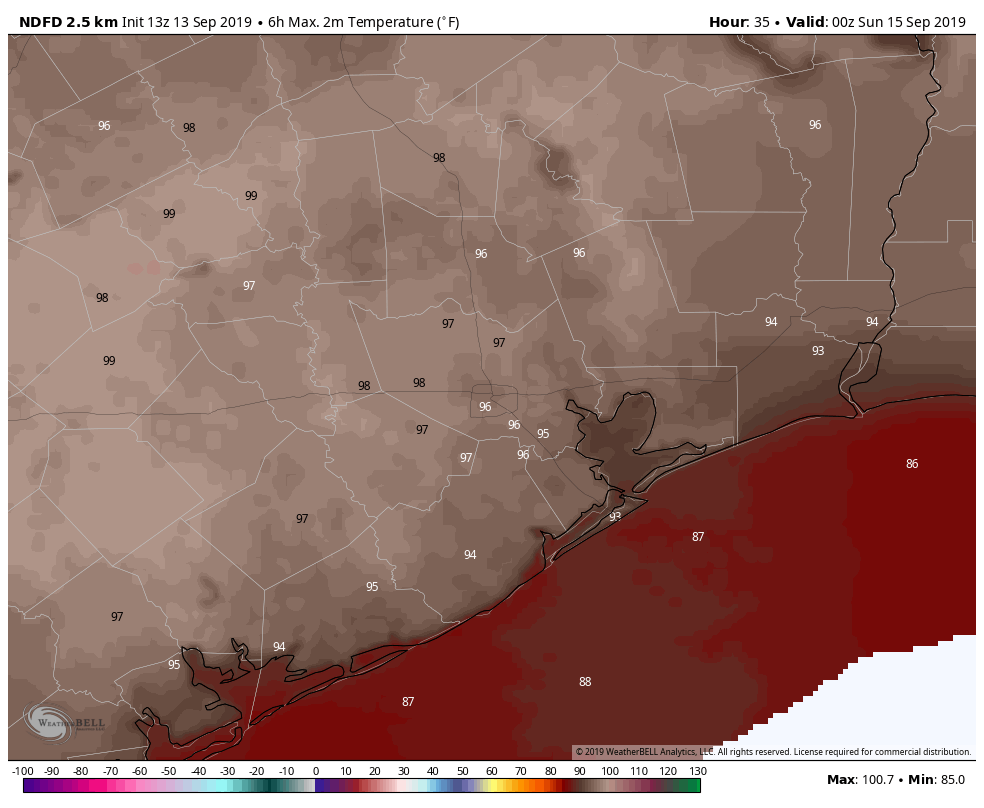 High temperatures on Saturday will probably hit the upper-90s in most of the area. But humidity will not be terrible. (NWS forecast via Weather Bell)

Sunday gets a tiny bit trickier. Moisture from an area of low pressure in the upper atmosphere will take over most of the western Gulf but primarily offshore. We should see at least a few showers being flung toward Galveston and other areas southeast of Highway 59/I-69 on Sunday morning or afternoon. But most places will probably stay dry. We’ll start in the 70s and end in the mid-90s.

There is still a bit of uncertainty on exactly how that upper low in the Gulf is going to behave in terms of daily showers and storms. Right now, I would expect a mix of sun and clouds each day. Showers and storms may develop along the coast and gradually build inland through the morning and afternoon. There may be a day where storms are fairly concentrated along the coast and inland areas see nothing at all. But Monday through Wednesday or even Thursday look this way. Outside of that, it will be hot and humid. Look for low- to mid-90s during the day and upper-70s at night.

Rain totals will vary, with perhaps 1 to 2 inches along the coast and less inland. That said, there could very well be higher amounts in some areas.

The good news is that we have no real serious concerns in the Gulf. The National Hurricane Center declared Potential Tropical Cyclone #9 yesterday off Florida. That was the system we had been watching this week. That is expected to slowly develop into a tropical storm and come close to the Florida and Southeast coasts. 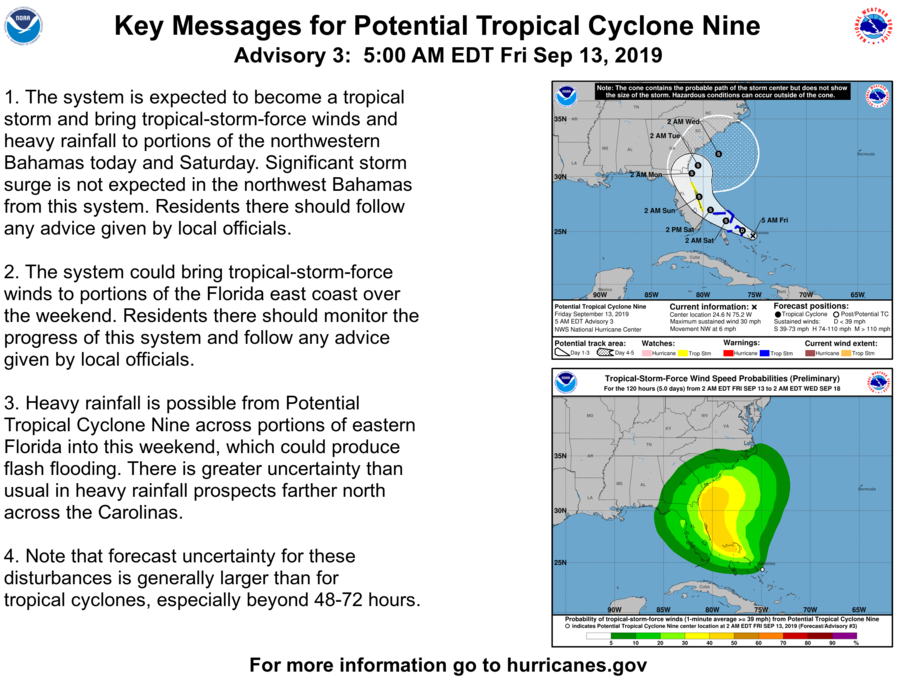 Another storm is brewing for folks in the Southeast to keep tabs on. (National Hurricane Center)

There is still a good bit of uncertainty on exactly how close this system will get to the coast there, so interests from Florida to the Carolinas should watch this.

Behind PTC #9, there are a couple tropical waves that could develop in the central Atlantic Ocean. While we will keep an eye on these disturbances since things can change, we don’t see anything right now that concerns us in the Gulf over the longer-term.

29 thoughts on “Hot and mostly dry weekend, with an update on the tropics”