Scattered rain chances will continue through the middle of the week before sunnier skies return for the first half of the weekend. There still are no real signs of a cold front, alas, but we will need to keep an eye on the tropics over the next couple of weeks—which we’ll discuss below.

Similar to conditions on Monday, we’re going to see some scattered showers develop later today as Gulf of Mexico moisture streams inland. But as there is no real trigger for this atmospheric moisture to precipitate out of the sky, rain chances for most of the region will only be about 30 percent. Skies will be partly sunny, and whether high temperatures climb into the mid- or upper-90s will depend upon the extent of cloud cover and rainfall near you this afternoon. But we can safely say it will be hot. 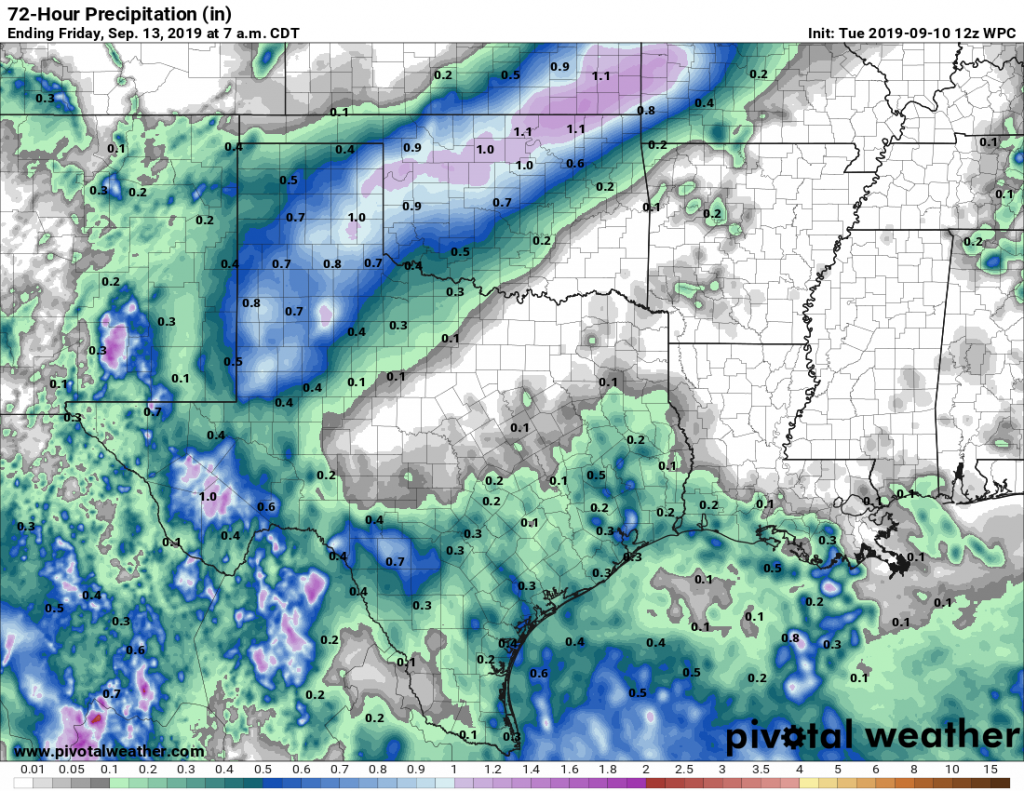 Most of Houston should see some at least some light rain over the next three days. (Pivotal Weather)

Another day similar to Tuesday, albeit with higher atmospheric moisture levels. This should nudge rainfall chances up into the 50 percent range, and thunderstorms could briefly be fairly intense. Highs will likely be in the mid-90s.

High pressure will begin to build over the region, helping to reduce rain chances down to around 20 percent each day. These should be mostly sunny days with highs in the mid-90s.

Right now, the influence of the latest high pressure system appears to peak on Saturday, leading to a hot and sunny day in the mid- to upper-90s. If I had to guess, this is probably the last real chance that Houston has to hit 100 degrees in 2019. By Sunday the influence of high pressure begins to wane, and we’re likely to see some clouds, slightly cooler highs, and at least some slight rain chances.

Next week and the tropics

High pressure that has more or less kept Texas rather hot for awhile will move off early next week, potentially opening up the state to more Gulf of Mexico moisture. This comes toward the typical end of the state’s tropics season—by the end of September, the chance of a hurricane landfall in Texas falls significantly—but not too late. I’ve annotated the map below to try and offer some general guidance. 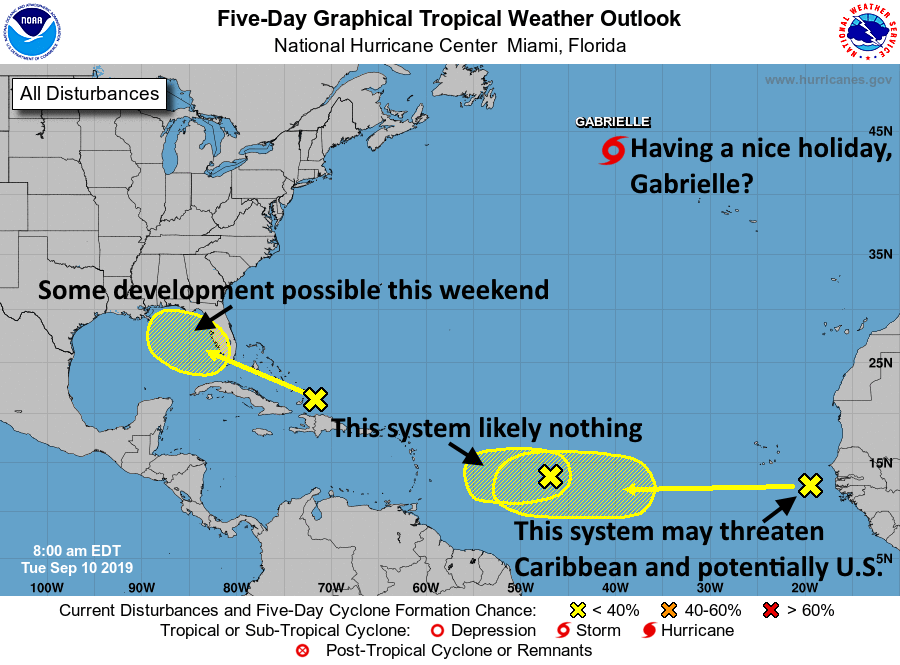 The bottom line, for now, is that the the system near the Dominican Republic may move into the Gulf this weekend and develop into a tropical depression. There is no model support, at present, for anything stronger than that. However it may well lead to some elevated rain chances next week, and we’ll always track low-pressure systems in the Gulf of Mexico during September.

The other system now moving off of Africa will also be worth tracking as it nears the Caribbean. Right now there are no particular reasons to believe it will move into the Gulf of Mexico, however.

13 thoughts on “A little more heat, a little rain, and an eye on the tropics”