Rainfall totals on Thursday were rather pedestrian across the region. Some folks saw maybe a half-inch or so. Others saw none at all. The bullseye was east of Mont Belvieu in Chambers County, which saw just shy of two inches. Santa Fe down in Galveston County also did fairly well.

Today could see slightly healthier rainfall totals setup in parts of the area, especially along the coast. Let’s jump in.

Radar this morning shows just a few showers along the coast, with a good bit more offshore lifting northward.

Radar loop this morning shows scattered showers, some heavy, lifting north. Expect more of these to develop throughout the day. (College of DuPage)

Some of these showers have a bit of heft to them, so rainfall is going to be feast or famine today. We should see a general trend of more numerous showers and storms heading into this afternoon. Rain totals though will vary widely. Some folks will see no showers today, while others may get a healthy 1 to 3 inches in downpours. Those pockets of heavier rains are likeliest south and east of Highway 59 though. We should reach the low-90s today without much issue, except along the coast, which will be a touch cooler.

The plume of tropical moisture that’s helping to fuel these thunderstorms remains aimed at East Texas and Louisiana tomorrow, so I would again expect a fairly robust coverage of storms, particularly along the coast in the morning, gradually working inland in the afternoon. 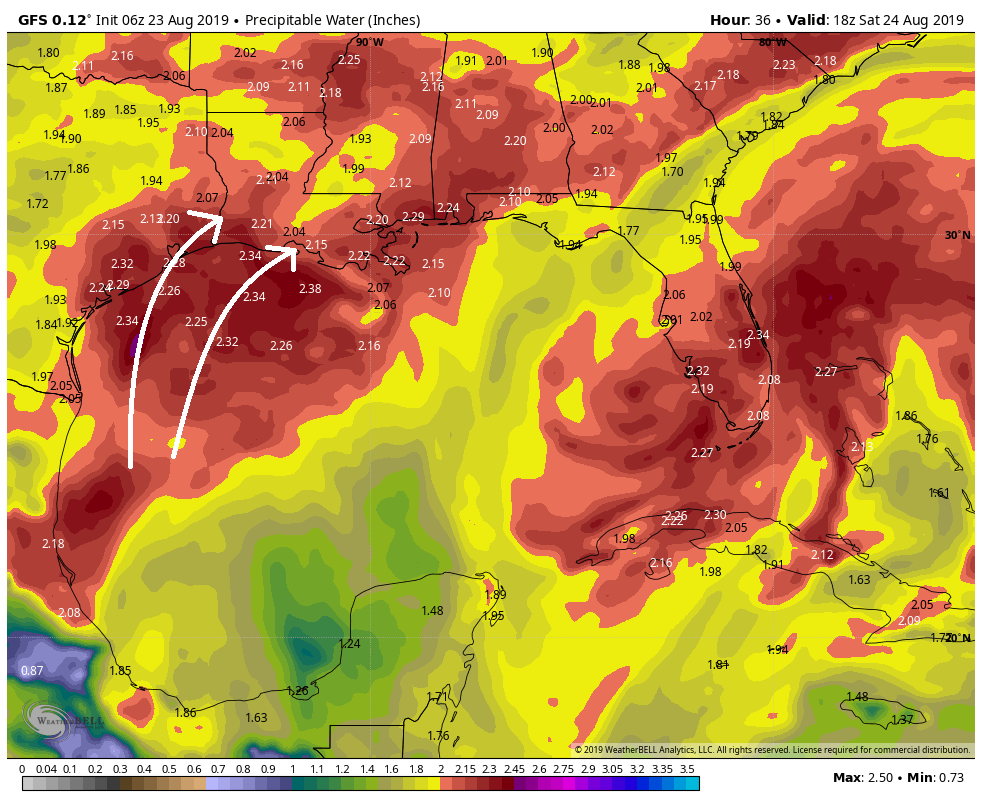 Storm coverage may be a touch less than today, especially north and west of Houston. But again, expect feast and famine tomorrow, with some areas dry and other areas picking up an inch or two of rainfall. We should be able to get into the lower 90s before or in between storms tomorrow. Areas inland from Houston will be hotter. Storms should subside after sunset.

Support for the heaviest rain and storms will gradually slip to the east on Sunday. While we should still see storms to start the day in areas along the coast, they will be a bit less concentrated. Expect a smattering of a few showers and storms inland on Sunday afternoon. With less rain, we should bounce back into the mid-90s.

Support for any storminess dwindles even further to start next week. Expect ample sunshine and hot weather. I would say mid- to upper-90s are likely both days with just a small handful of downpours around each late morning and afternoon.

Weather models continue to insist that a cold front is going to try and push into the area late next week. In general, I would expect gradually increasing shower chances especially Thursday or Friday. If a front gets through, we’ll feel the impacts mostly via slightly lower humidity and slightly cooler nights. Daytimes should still be plenty hot, but the lower humidity will make it seem more comfortable. We will have a better idea as to how real this is on Monday, so check back then!

Quick note on the tropics to let you know that the Gulf looks trouble-free over the next 7 days. The National Hurricane Center has outlined a high chance of a disturbance developing  off Florida that could trek close to the East Coast next week (though it will probably stay offshore). 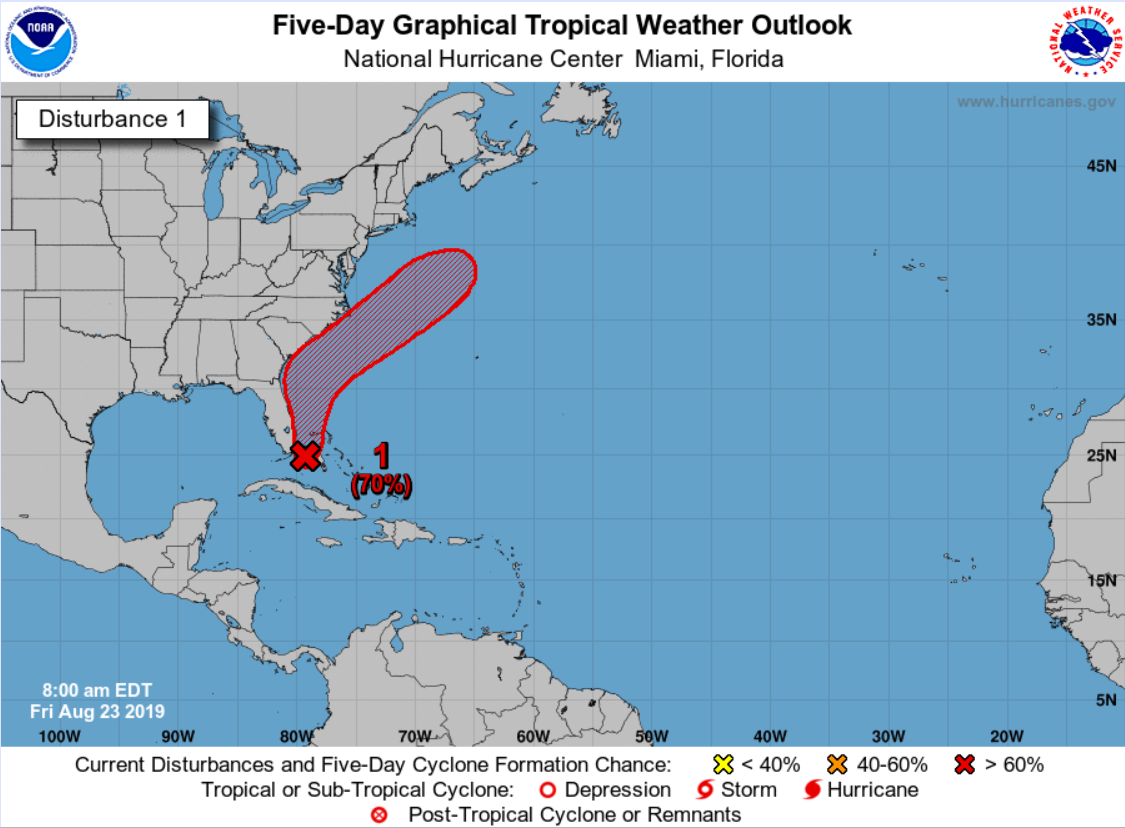 The National Hurricane Center says a tropical system could develop over the next 5 days off the East Coast. It’s likely to stay offshore, and it isn’t a Gulf concern. (NOAA)

The next name on the list is Dorian, should it come to that. Not shown, but they are also outlining an area in the Atlantic east of the islands for a low chance of development. Weather modeling is not terribly excited about the prospects of that developing, however, but we will continue to watch. So, some fairly good news as we close out August for sure. We will absolutely take whatever calm Gulf periods we can get now that we’re in the peak of hurricane season.

9 thoughts on “A soaker for some, a smattering of scattered showers for most”