Welcome to the weekend, everyone. We’ve had several questions about tropical activity during the last day or so as the National Hurricane Center has highlighted a couple of areas for likely tropical cyclone formation. None appear likely to present a threat to Texas, but we’re posting anyway to address those questions, and allay concerns. This is also a good reminder that we’ve reached the peak of hurricane season, and the next month, historically, is the time of most concern for Texas.

Here’s the latest five-day map from the National Hurricane Center showing the two systems of Interest, to which we’ve added their “invest” designations. 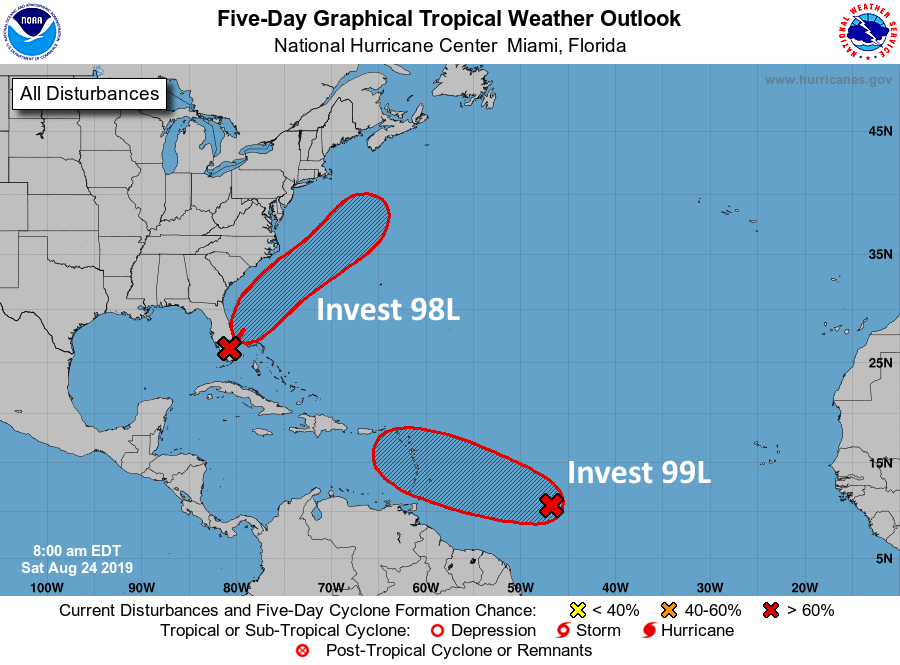 Forecast models indicate this system has a strong chance of becoming a tropical storm or a hurricane, but the preponderance of tracks develop it after the system has moved away from Florida, and it will likely present no significant threat to land.

The track of 99L appears to be a little bit more ominous, as it brings the system toward the Caribbean Sea. The National Hurricane Center gives it about an 80 percent chance of developing into a tropical depression or storm. However, the global models generally anticipate that any system that might develop will fall apart somewhere in the general vicinity of Hispaniola due to unfavorable wind shear.

Certainly it will be worth watching the evolution of 99L over the next week, as there are some scenarios in which it tracks into the Gulf of Mexico. But by far the most likely outcome is a) dissipation or b) some kind of rainfall threat to the Caribbean Sea or Florida over the next five to seven days. As always, if this changes, we’ll update the site.

9 thoughts on “Tropics coming alive, but we see no imminent Gulf threats”