Good morning. Houston’s hit-or-miss rainfall pattern appears likely to continue from now through the weekend. The pattern will include more hits along the coast, and more misses for areas inland of interstates 10 and 69, as the further one is from the Gulf, the less access to moisture there will be.

This morning will bring mostly sunny skies to the region, but in what is now becoming a familiar pattern, scattered storms will migrate inland beginning around noon for areas along the coast. Through the afternoon and early evening hours, the storms will then progress across central parts of Houston, and then exit northward. Perhaps 40 percent of Houston will see rain, and a fraction of that will see some fairly heavy, if brief rainfall. The rest of you will see dark clouds in the distance, and perhaps hear the rumble of thunder. Highs will be in the mid- to upper-90s, and this will depend on how clouds develop over your location during the peak heating of the mid-afternoon hours.

As we’ve been talking about, a plume of more moist air will be moving north across the Gulf of Mexico at the end of this week, pushing up rain chances and likely driving down temperatures into the low-90s. Your weather for the first half of the weekend is going to basically depend on how far you live from the coast. Inland locations such as Katy will probably see mostly sunny days, with higher temperatures and slight, if any rain accumulations. But coastal areas such as Clear Lake or Galveston have a better chance of rain, and may potentially see accumulations of 1 inch or more of rain. Bottom line? Perhaps this isn’t the best weekend to head to the beach.

This day should be a little bit warmer, with a slightly less chance of rain as the plume of tropical moisture pulls north, and away from Texas. But at this point I don’t have much confidence in saying whether or not this will be a partly or mostly sunny day.

The first part of next week looks rather summer-like, with highs in the low- to mid-90s, and rain chances falling back to perhaps 20 or 30 percent each day. 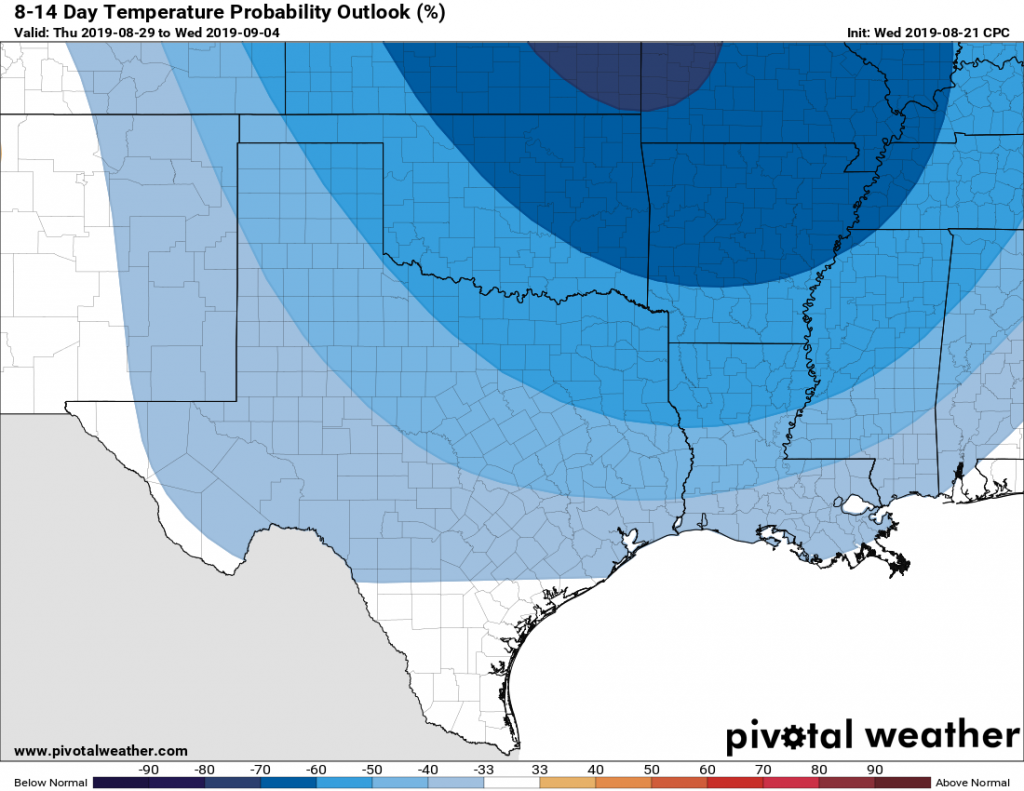 Temperatures are more likely than not to be cooler than normal in a 8 to 14 days. (Pivotal Weather)

The global models are continuing to advertise the possibility of a cool down around Sept. 1—not a particularly striking one as it would be fairly early for a front. However, I would welcome the possibility of lows at night around 70 instead of 80 degrees. NOAA’s Climate Prediction Center is also starting to hint at this possibility in its 8-to-14 day outlook shown above. Fingers are crossed, but confidence remains fairly low given that we’re still more than a week out and it’s still summer.

15 thoughts on “The coast will be wet for awhile, but we’re hopeful about next week”