Sunday has gone about as expected—with a smattering of heavy downpours but most of the region receiving 1 inch of rain or less. Monday and possibly Tuesday will almost certainly be different, with the potential for widespread heavy rainfall, and enough uncertainty that we’re going to continue to watch the forecast closely. We will have an update on the site no later than 6am CT Monday.

The heaviest rains are remaining well offshore over the Gulf of Mexico as of Sunday evening. The general expectation is that as the tropical disturbance moves west, toward the Texas coast, these showers will slowly move toward Texas and southern Louisiana as well.

This inland movement of heavier storms seems most likely to happen sometime on Monday morning, but whether that’s shortly after midnight or well into the day, we can’t say for sure. I’d guess after sunrise, if I had to.

Though disorganized, this storm system will bring a lot of moisture into the Texas coast, and this abundant tropical moisture has the potential to produce high rainfall rates in the most intense, isolated storms. However, it is most likely that most parts of the Houston metro area will see 2 to 4 inches of rain on Monday, with higher-end totals closer to the coast, and lower-end totals for inland areas (i.e. on the inland side of Highway 59). These kinds of rain totals may briefly flood streets during downpours, but most likely will not present long-term, widespread problems.

What we don’t know

With that said, some of the forecast models are bringing quite a bit more rainfall—on the order of 6 to 12 inches of rainfall—with this storm over the next few days. We believe those higher totals will occur south of the Houston region, from Matagorda Bay southward the the Coastal Bend and into the Valley, but we do not have supremely high confidence in that. The bottom line, with the remaining uncertainty, is that it’s best to check road conditions before venturing out on Monday morning, and to keep a wary eye on the weather throughout the day. We’ll be here to help.

The potential for heavy rainfall remains on Tuesday in Houston (frankly, we’ll have a better idea about Tuesday as we see how Monday shakes out), and then the threat for really high rainfall rates should gradually fall off later in the day on Tuesday and into Wednesday. We think. 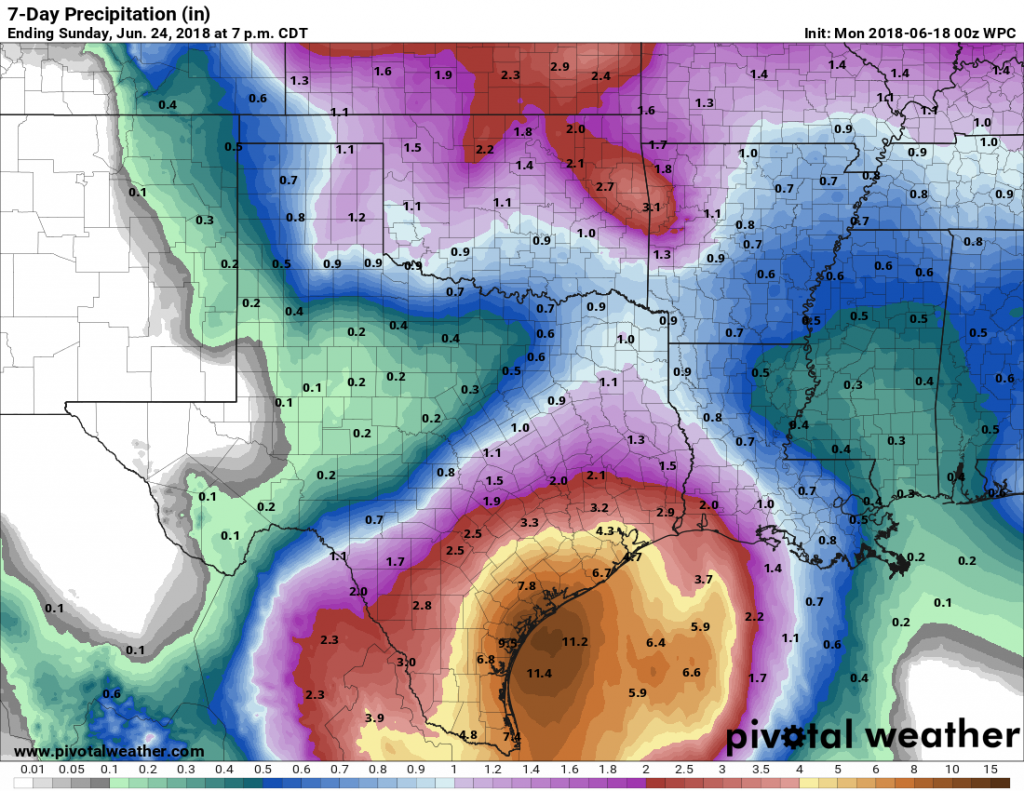 NOAA forecast for rainfall accumulation from Sunday evening through the next seven days. (Pivotal Weather/NOAA)

We probably won’t see much sunshine before Thursday or Friday.

36 thoughts on “A wet Monday in Houston: Here’s what we know, and what we think”