Good morning, and happy Father’s Day to those celebrating today. For the most part, the forecast is on track as we’ve been describing it for several days now, but there are a couple things to keep tabs on. And if your travels will take you well south of the area, more toward Corpus Christi, you’ll want to keep a closer eye on the weather. Let’s jump in.

Here are a few bullet points with the main takeaways that we want to convey today.

As of about 8-8:30 AM Sunday, the Houston area is all quiet. We have a few isolated showers, mainly south and east of downtown Houston. And for much of this morning, we’ll be fine with just a couple downpours.

Meanwhile, looking at a bigger picture view of things, satellite this morning shows our disorganized disturbance in the Gulf of Mexico now. Heavier thunderstorms are occurring well offshore. This is what we’re watching for tonight and Monday.

More organized thunderstorms (not an organized tropical disturbance) are offshore in the Gulf of Mexico. Those should arrive in our area later tonight and Monday. (Tropical Tidbits)

In terms of tropical development, the National Hurricane Center continues to carry a token 20% chance over the next 48+ hours. That’s a fair assessment, and we feel that impacts to our area will be similar regardless of if this thing meets technical definitions or not within the next couple days.

So what can we expect for the rest of today? Well, as this disturbance creeps toward Texas, expect numerous showers and thunderstorms to pop up late this morning and afternoon across most of the area. I’m not going to classify Father’s Day afternoon as a complete washout, but you will likely be dodging raindrops at least once, if not a few times this afternoon. So if you are planning anything outdoors, have a backup plan. Most of the area will see a couple tenths to maybe a half inch of rainfall. Some will see less, and some may see in excess of one or two inches where rains are most persistent. Today’s rainfall will be a nuisance more than anything for most folks.

The bulk of this rain event will likely occur in this timeframe. Expect numerous showers and thunderstorms in the region tonight and most of Monday. We will likely see any storms dissipate north of I-10 this evening, and it’s possible folks up in The Woodlands or out west of Katy may not see anything at all after this evening until tomorrow morning or afternoon. Near the coast, however, we do expect showers and storms to be a feature most of tonight into Monday morning.

This is a forecast satellite loop from the NAM model for tonight. Notice how the brighter clouds (indicating better rain risk) are mostly in the southern half of the region. Inland storms dissipate after dark and coastal ones keep going much of tonight. (Weather Bell)

Rains may in fact be heavy at times southeast of downtown Houston, especially along the coast and near Galveston Bay overnight

After sunrise Monday, we’ll see storm risk expand again to most of the area. We’ll have slightly more favorable ingredients to work with for rainfall tomorrow, so expect locally heavy rains throughout parts of the area. I’d expect an inch or so more tomorrow, with, again, areas seeing higher amounts.

Rainfall rates in the heavier storms tonight and tomorrow will be capable of producing some street flooding in parts of the area. That is probably our biggest concern for Monday. You’ll want to give yourself a few extra minutes out the door Monday (and on your return home).

In terms of other impacts, we don’t see too much to be seriously concerned with at this point. Some of the thunderstorms could be strong and produce strong wind gusts, especially along the coast. Rough seas will obviously be a concern offshore. Rip currents will be serious the next couple days, so again, if you swim or surf between rain bands today and tomorrow, please use caution. Tides of 1-2 feet above normal on the coast are likely with some run-up on beaches, but no serious flooding issues. Expect surf to stay up and tides elevated through much of this week.

Rest of the week

After Monday’s rains, our system will shift off to the south and west. 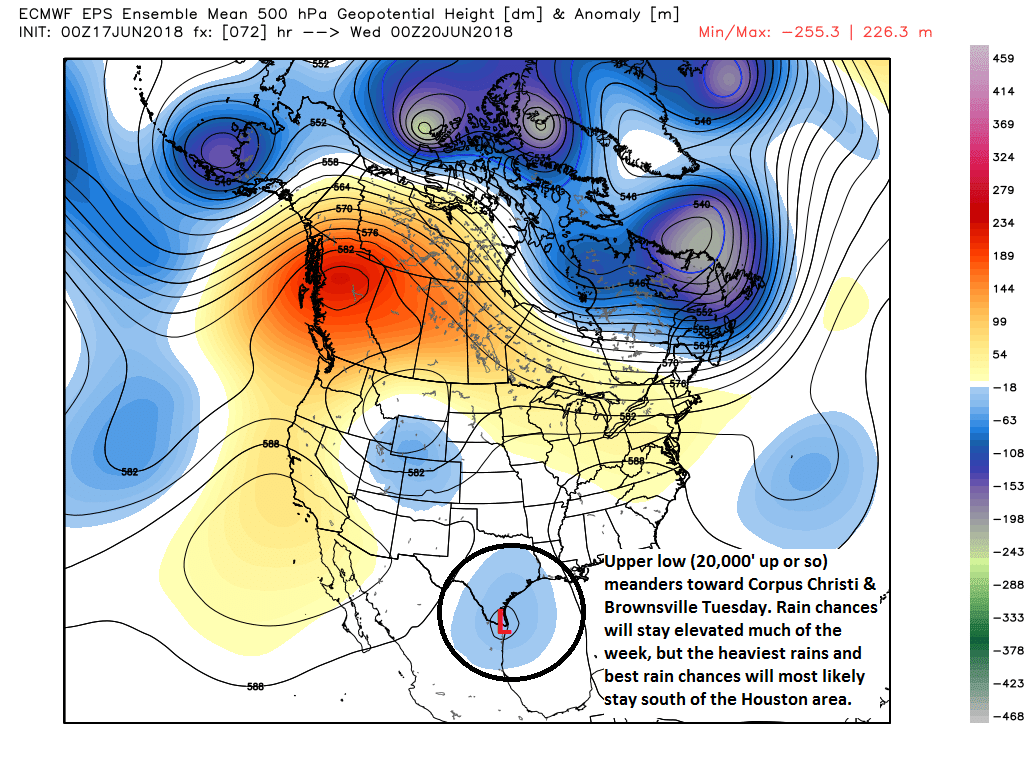 The map above shows that on Tuesday evening, this disturbance will be centered over South Padre Island. That should keep the heaviest rains in the Corpus Christi area or near the Rio Grande Valley. Houston will continue with higher than usual rain chances Tuesday and beyond, but I don’t expect we will see as many showers and storms each day as we will later today and Monday.

If your travels will take you down toward Corpus Christi or Brownsville, you will want to take note of some of the forecast rain totals. 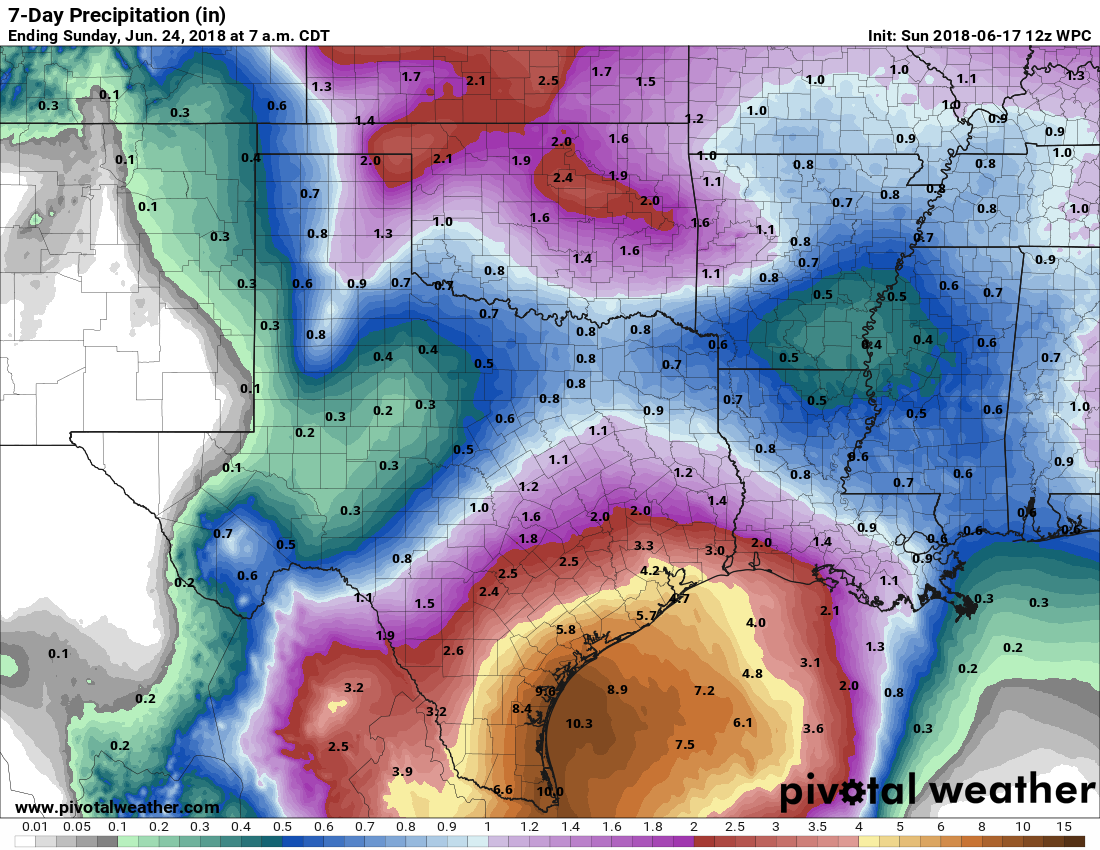 The official total rainfall forecast from NWS through next weekend averages about 2-4″ in the Houston area, with higher amounts, especially southeast of US-59. In Corpus Christi and Brownsville, however, 6-10″ of rain is likely, with higher amounts. (Pivotal Weather)

While drought has been much more severe in South Texas than in the Houston area lately, six to ten inches of rain over multiple days between Corpus and Brownsville, with higher amounts likely will cause some flooding problems down that way.

You can also see from the map above that officially, the NWS forecast for the Houston area has not changed much since last week. We still expect, in total, about two to four or five inches of rain around Houston, with higher amounts possible south and east of US-59.

We will continue to watch for where pockets of enhanced rainfall may occur and if there will be a higher street flooding risk in particular neighborhoods. Eric and I will post as needed. I’ll try and tackle questions in the comments, on Facebook, or on Twitter. One common question we get a lot of is regarding travel plans and airport delays: We can’t predict airport delays with any specificity. I would encourage you to have patience if you’re traveling later today and tomorrow though, as delays will certainly be a good bet at some point. Those may linger Tuesday. If travelling somewhere by car, we can’t tell you go/no-go. You will likely hit heavy rain at some point, so please use caution if you go, drive safely, and have methods to get weather information between here and there, especially if you’re headed south of Houston this week.