Good morning. After a hot day Tuesday—high temperatures peaked at 92 degrees—a cool front is pushing through Houston this morning and will be off the coast shortly after sunrise. The front has generally brought 0.25 to 1.0 inch of rain to the area. We’ll see some roller coaster weather through the weekend, with cold then warmer days, before a more prolonged stretch of cooler conditions next week.

Some light rain may linger behind the front’s passage, but for the most part today should simply bring gray skies and at-times gusty northerly winds. High temperatures today will likely stall out in the mid- to upper-70s for most of the area. There’s not an overly amount of cooler air with this front, so overnight lows may drop into the upper 50s for inland areas, but remain in the low 60s near the coast as skies stay cloudy Wednesday night. 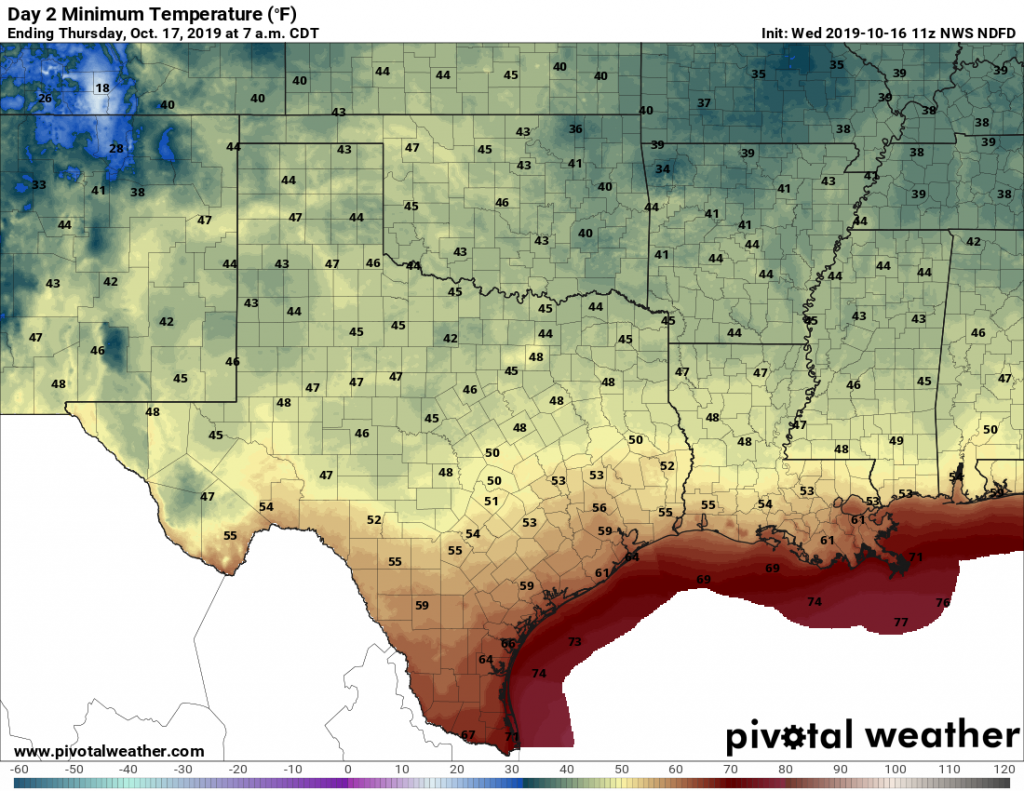 Thursday morning’s low temperatures will be quite pleasant. (Pivotal Weather)

This should be an awfully nice fall day, with highs generally in the low 70s and partly sunny skies. Low temperatures Thursday night will be similar to Wednesday night, albeit perhaps a degree or two warmer.

Warmer conditions as the onshore flow resumes, but highs should still be capped in the low 80s, with mostly sunny skies. We can’t rule out the possibility of a few isolated showers.

The first half of the weekend looks warm and sunny. Expect highs in the upper 80s with very little chance of rainfall. Saturday and Sunday may be the region’s last, realistic shot at hitting 90 degrees this calendar year.

A bit of a stronger onshore flow will increase moisture levels by Sunday, and this could help to drive some scattered showers. For the most part this day should be sunny and warm, with highs in the upper 80s to possibly 90 degrees.

A cold front arrives on Monday—time to be determined—and this will have the effect of ushering in a much cooler week. The models are split about the amount of rainfall that will come with the next front, but it’s possible we’ll see a stormy frontal pass. After this, however, we’re likely to see several days of clear, cool, and pleasant fall weather in Houston. Highs most likely will top out somewhere in the 70s, with nights (probably) mostly in the 50s. 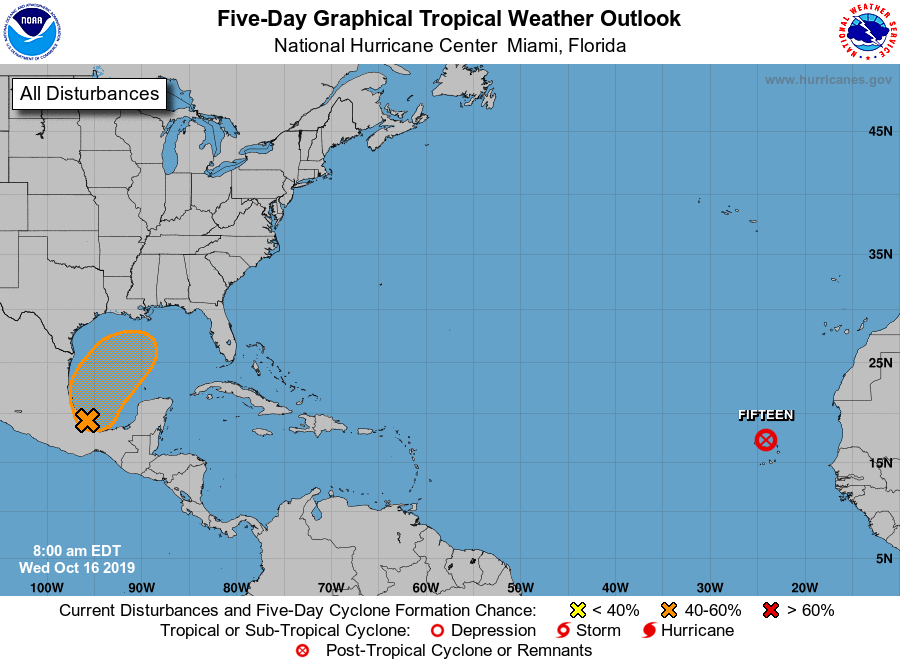 No, Texas won’t have to watch this system closely. (National Hurricane Center)

The National Hurricane Center has pegged a tropical system in the southern Gulf of Mexico as having a 50 percent chance of development over the next five days. I saw a number of references such as “we’ll have to watch it closely” from Houston people on social media over the last day or two, but the fact of the matter is we don’t. This system is going to move to the northeast this week, toward the Louisiana coast (perhaps New Orleans). It may have some effect on seas off the coast of Galveston, but it is not going to significantly affect Texas.