Besides caring about the weather here at Space City Weather, Eric and I also care about the Astros. So with that in mind, we want to update our readers on the weather for games 3, 4, and 5 of the American League Championship Series up in the Bronx. And believe me, weather is going to play a big role in the balance of this series.

This afternoon’s game should go off trouble-free. Expect a good deal of sunshine for the game. First-pitch temperature should be in the mid-60s with light winds.

There has been talk about game 4 for a few days now, and we are here to tell you: We don’t think game 4 will be played on Wednesday.

A look at a loop of the GFS model here shows a coastal storm developing tomorrow evening south of Long Island.

This one really cranks up in the evening and will deliver heavy rain and strong winds to New Jersey, New York City, and much of New England, possibly ending what has been a pretty decent foliage season in that corner of the country. More importantly, for the Astros and Yankees and their fans, this throws a big wrench into game 4 plans. Rain should begin in New York City around 2 PM or so. Here’s a look at the rainfall expected from the GFS model between 8 PM and 11 PM EDT, within the scheduled window for Game 4. 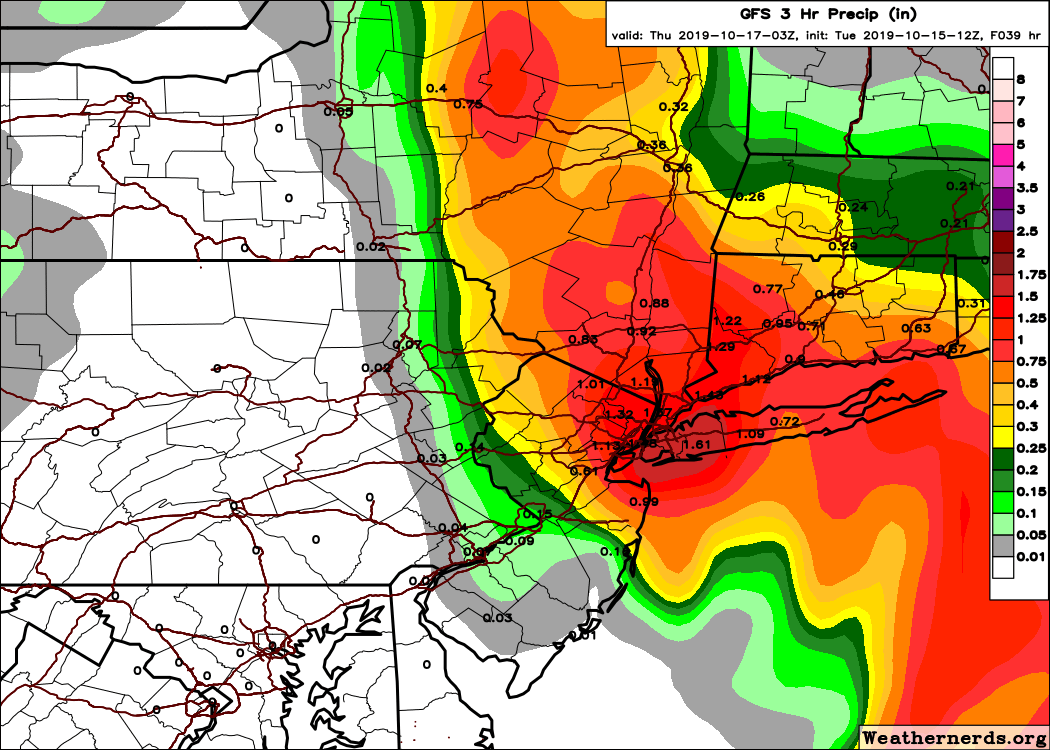 Forecast rainfall from the GFS model between 8 PM and 11 PM EDT on Wednesday, or during the scheduled time of the Astros game. (Weathernerds,org)

That suggests that there will still be heavy rainfall in the Bronx during the evening hours. Unless something dramatically changes, we think game 4 will be postponed and moved to Thursday. Oh, and in addition to rain, this storm will produce some pretty gusty north winds in NYC, perhaps topping out around 30 to 35 mph on Wednesday evening. So, yuck.

Look for a breezy day in the Big Apple on Thursday. Winds will be diminishing Thursday evening, but we should still see sustained west or northwest winds at 15 mph or so. West winds would be straight out to right-center field, while winds out of the northwest would be from left to right across the outfield, meaning the short porch in right could get some love in this one. But, with that in mind, temperatures will be notably colder Thursday evening. Expect first pitch temperatures around 55 degrees, dropping into the low-50s through the game. The combination of a breeze and cooler temperatures will give this one a decided autumn feel.

If game 5 gets pushed to Friday, I think the start time would depend on whether the NLCS is still ongoing. Either the matinee slot or the evening slot will feature cool, breezy, dry weather. Winds should be from the northwest around 10 to 15 mph (possibly gustier with a day game). Temperatures would fall from the low-60s to upper-50s in a day game. In the evening, we would see temps drop from the mid- to upper-50s into the lower-50s.

We won’t make any predictions on which team a Wednesday rainout would benefit. But it certainly could alter how the managers approach their strategy this afternoon and in games 4 or 5. We shall see! We hope you find this helpful, and let’s go Astros!