It has been a wet winter so far for most of Texas in general, and the Houston area in particular. December finished with about twice as much rain as normal for most of the region, and January is well ahead of normal as well. (The map below shows percent of normal rainfall for Texas over the last 60 days. Most of Houston has had 130 to 200 percent of typical amounts.) The reason I’m pointing this out is that, for the first time in awhile, the next 10 days look fairly dry—with only slight rain chances and slight rain accumulations. 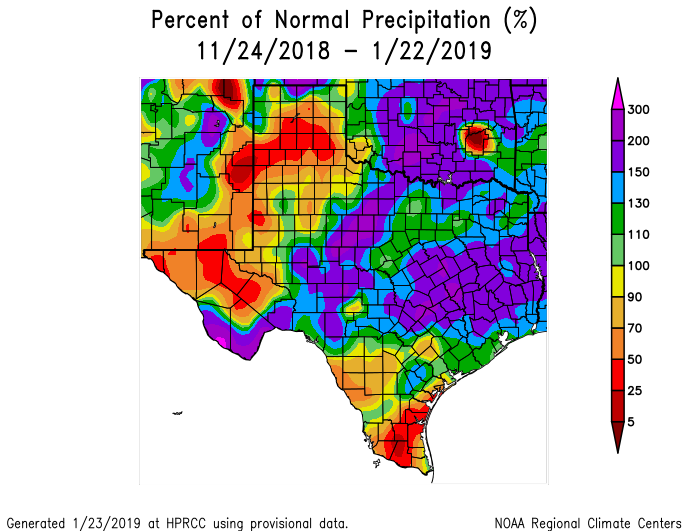 “Percent of normal” rainfall for Texas over the last 60 days. (NOAA)

This morning, temperatures range from the upper 20s for inland areas such as Conroe and Huntsville, to the upper 30s for areas along the coast such as Galveston and Palacios. In the city of Houston itself, temperatures are at, or just above the freezing level. High pressure, calm winds, and clear skies have allowed for ideal cooling overnight. We’ll now slowly warm up before another strong front next week.

Expect mostly sunny to sunny conditions, with highs in the mid- to upper-50s. Lows for Thursday night will probably be about 5 degrees warmer than Wednesday night, and by Friday night most of the region should be in the low 40s.

As the onshore flow returns from the south by later on Friday, we’ll see increasing moisture levels on Saturday. Additionally, a low pressure system will move up the coast, but it now appears that most of the light-to-moderate rain associated with this will remain to the southwest of the region (i.e. Matagorda Bay area), and that for Houston skies should remain partly to mostly sunny on Saturday. Highs will likely rise up to around 60 degrees. Mostly cloudy skies Saturday night should keep lows in the mid-40s. I’d say there’s about a 20 percent chance of rain in Houston itself during the afternoon or evening hours. 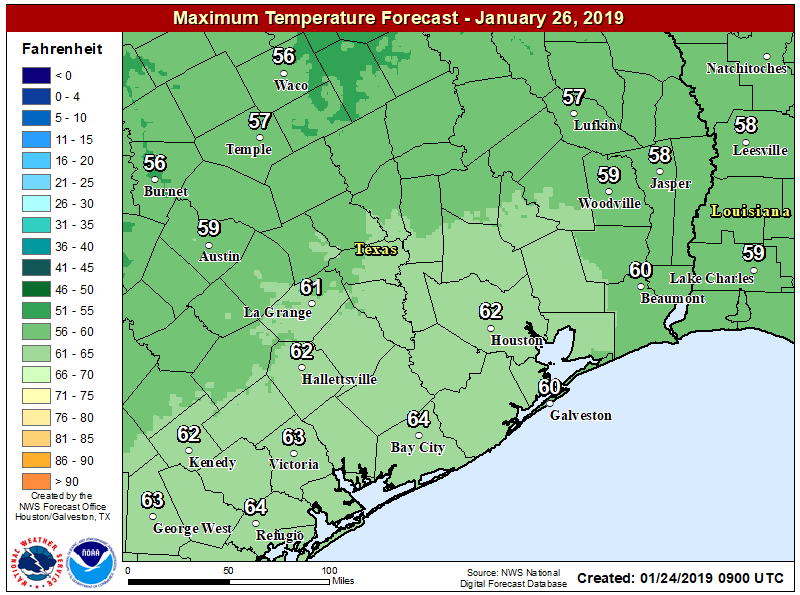 A weak front will move into the region late Saturday or early Sunday, and this should make for clear skies on Sunday, with a high of around 60 degrees.

Highs Monday will warm into the upper 60s to perhaps 70 degrees before a stronger front approaches the region, likely moving through between Monday evening and Tuesday morning. There will be time for some moisture to pool ahead of this front, but at this point I’d expect a broken line of showers and perhaps thunderstorms at most. We may see little or no rain at all with the frontal passage.

It will be dry and cold after this, with a likely freeze for areas well inland, and a near freeze in Houston itself. We’ll have to tweak these temperatures, however, in the days ahead. We should see several days of sunshine after the front.

4 thoughts on “After a wet winter, we should now see mostly dry weather for awhile”