It’s looking like a mostly nice weekend ahead for Houston as we begin to try and dry out some after a very damp few months.

After a chilly start today, we should see sunshine and a few high clouds. 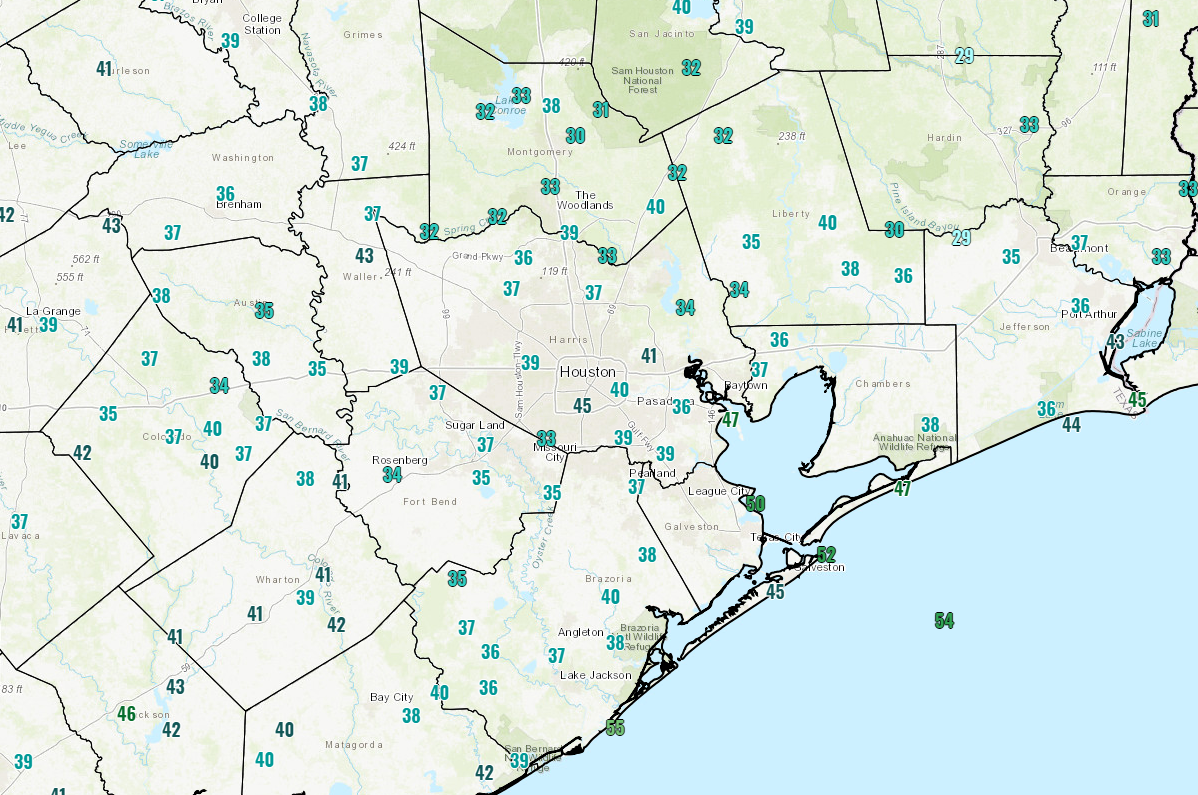 Temperatures this morning are generally in the 30s across much of the area, with a few 40s peppered in. (NWS)

As the day progresses, it will be pleasant, with high temperatures likely to get up close to 60 degrees or so. We won’t be quite as cold tonight, as low temperatures dip down into the low- to mid-40s.

On Saturday, a vigorous little disturbance will trek down the Rio Grande Valley. That puts it far enough away from Houston to keep our rain chances pretty low. On Thursday it looked like we only had maybe a 20 percent chance of a shower as this passed by. Today, I might up that to 40 percent that someone (not everyone) sees a few showers late Saturday afternoon or during Saturday evening. Otherwise, we will see a little additional cloud cover, but it should still be partly to mostly sunny most of the day. High temperatures Saturday should sneak above 60° in most spots, with a few mid-60s possible as long as cloud cover is limited and showers hold off til late. Rain totals will be zero for most folks, but perhaps up to 0.25″ south and east of Houston where shower chances are a bit higher.

Once that Rio Grande Valley system exits, we’re left with mostly fair weather for Sunday and Monday. We’re expecting partly to mostly sunny skies on both days. Temperatures on Sunday will warm from the lower or middle 40s in the morning up into the mid-60s during the afternoon. Monday should see us go even a bit warmer. We’ll warm from the upper-40s into upper-60s or even better.

Next week will be a week of change and transitions. On Monday night, a vigorous cold front will push through. We aren’t expecting much worse than some scattered showers right now for Monday night or Tuesday morning, with the best chances north and east of Houston.

Temperatures will be the bigger story. They should drop from the 50s on Monday evening into the 30s or low-40s by Tuesday morning. Weather models typically do a poor job handling Arctic air masses like the one expected next week in Texas, both in terms of timing and amplitude. So my thinking is that we may see temperatures not get much above the mid-40s Tuesday before dropping into the low-30s on Tuesday night. 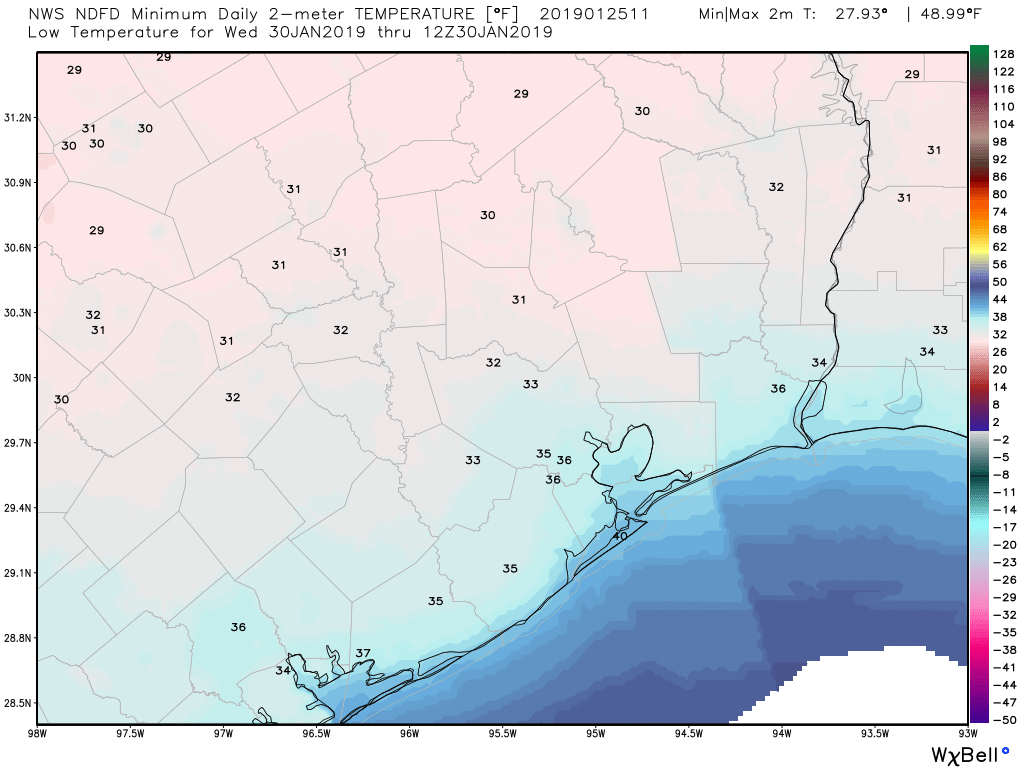 The NWS forecast for low temperatures next Wednesday morning shows borderline freezing conditions around much of the area. (NWS via Weather Bell)

It’s too early to say much about a widespread freeze next week other than to say it’s definitely a possibility, particularly if models are struggling with the cold and how far south it will push. Full disclosure, I fully expect the forecast next Tuesday and Wednesday to change a bit between now and then. We will know much more about this on Monday, so check back then for an update.

The weather should be mainly sunny and quite breezy in the wake of Tuesday’s front, but cloud cover and potential disturbances complicate the picture from Wednesday onward. The tracks of any disturbances will determine if we stay chilly for a longer stretch or if we begin to warm back up quickly by Thursday. Lots of TBD details here, so check back for an update about this as well on Monday.