Houston’s low temperature last touched the 30s back on April 2nd, the last gasp of winter. After that, the region’s nighttime temperatures never got below the mid-40s again, and then summer came to town. Now, it appears as though much of Houston may briefly slip into the upper 30s at the end of this week, and daytime highs will feel more like mid-winter than fall.

Conditions today will be mostly cloudy, fairly muggy, with intermittent light rain. A cold front will get past the Interstate 35 corridor in central Texas, but stop well short of the Houston area. This means that we should have relatively mild weather today and tonight—if your plans involve a certain baseball team and much-hoped for revelry there is good news. It appears likely that any daytime or early evening showers should wane by 9 or 10pm tonight. Temperatures likely will not fall below 70 degrees Tuesday night. 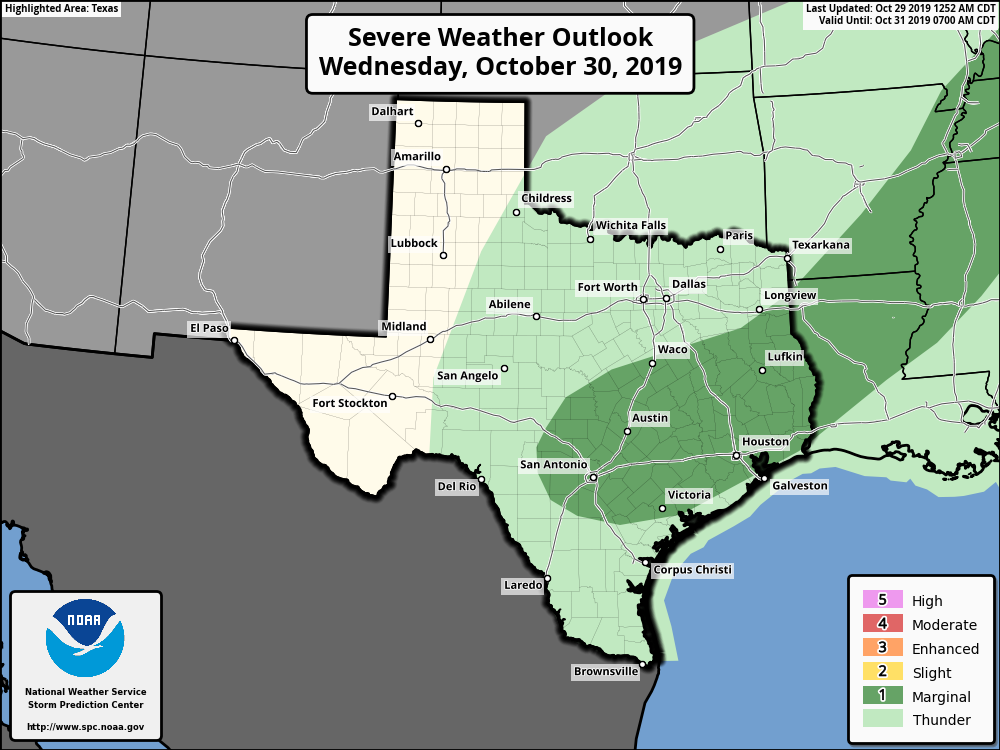 It’s cold front day! Atmospheric dynamics over the central United States will essentially shove the front toward the coast on Wednesday. What time will it move through Houston? Great question. Our best guess is that it pushes through Houston during the late afternoon hours and off the coast shortly after sunset, but confidence in the exact timing is low. Basically, we can expect conditions to get fairly warm on Wednesday ahead of the front—upper 70s?—and quite cold and breezy in its wake. 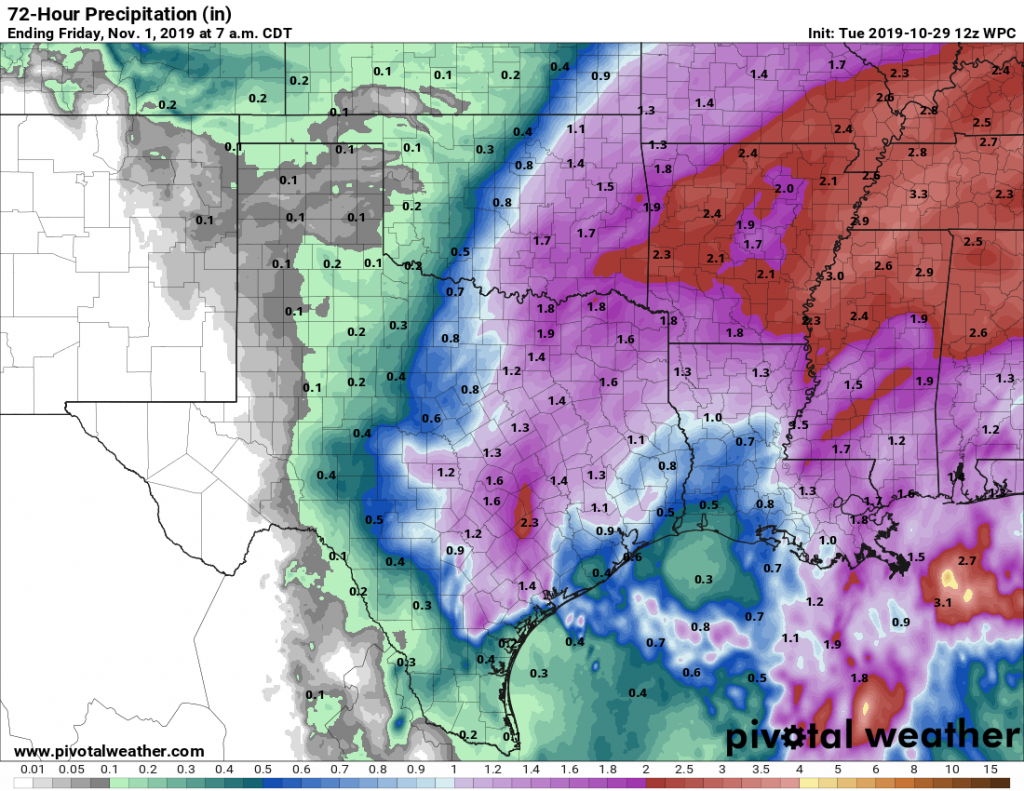 The other story to follow will be rainfall, and most of this should come during a period from Wednesday after noon through early Thursday. I think much of the region will probably get 0.5 to 1.5 inches, but there could be some outliers that pick up as much as 3 inches. Still, we do not have a real high concern for even street flooding at this time. Whenever the front passes through, there will be the threat of strong winds and light hail. So if there is a Game 7 of the World Series, we may have some concerns about weather going into, or coming home from the game. Hopefully a win tonight obviates these concerns.

Thursday morning is likely to be cold, with widespread lows in the 40s across the area. Rain chances should ease during the morning hours, and we think skies will turn partly sunny at some point during the afternoon. Highs likely will crest in the mid-50s. It will be breezy, with winds gusting up to 20 mph throughout the day, although hopefully these will die down some by early evening. Still, trick-or-treating will be a chilly affair, with temperatures likely in the low 50s. Low temperatures on Thursday night may well reach the 30s for areas north and west of downtown Houston. 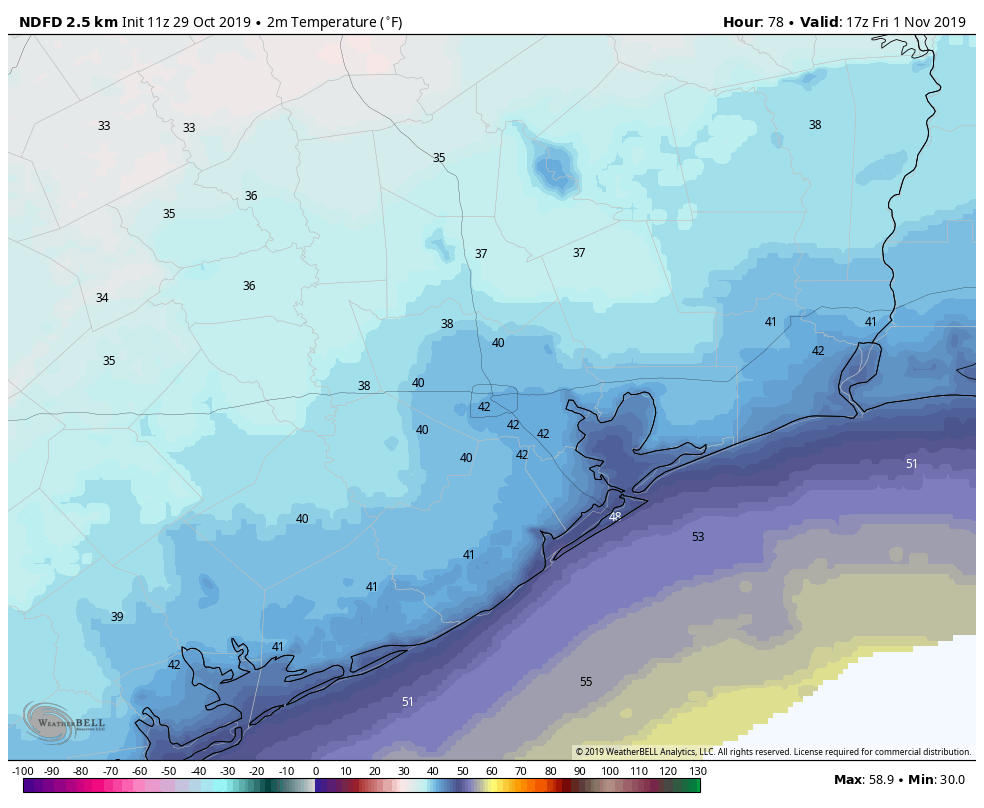 Sunny and winter-like, with highs in the upper 50s to perhaps 60 degrees. Friday night will be a few degrees warmer than Thursday night.

Both days should be mostly sunny, with highs in the 60s, and (for most people) nights in the 40s to low 50s.

Temperatures will rebound some, climbing back into the 70s by Monday or so, and nights will also warm up. Some slight rain chances return, but nothing we’re concerned about.

29 thoughts on “After seven months, winter-like weather returns to Houston”