Good morning. A cold front is moving into the western part of Houston this morning, and should push through most of the city this afternoon. The two issues related to the front are rainfall today and tonight, and then very cold air moving in behind the front to end this week.

High temperatures today ahead of the front should reach about 70 degrees for most. This morning a very narrow wedge of cooler air at the surface will push into Houston, and this will filter through the region. For the most part, rain showers during the daytime hours appear likely to be fast moving, and relatively brief—right now we do not anticipate the very heavy, organized rain we saw Tuesday in locations such as Tomball and The Woodlands. However, since that rainfall was not well forecast I do not have particularly high confidence in rain forecasts for the next 24 hours. 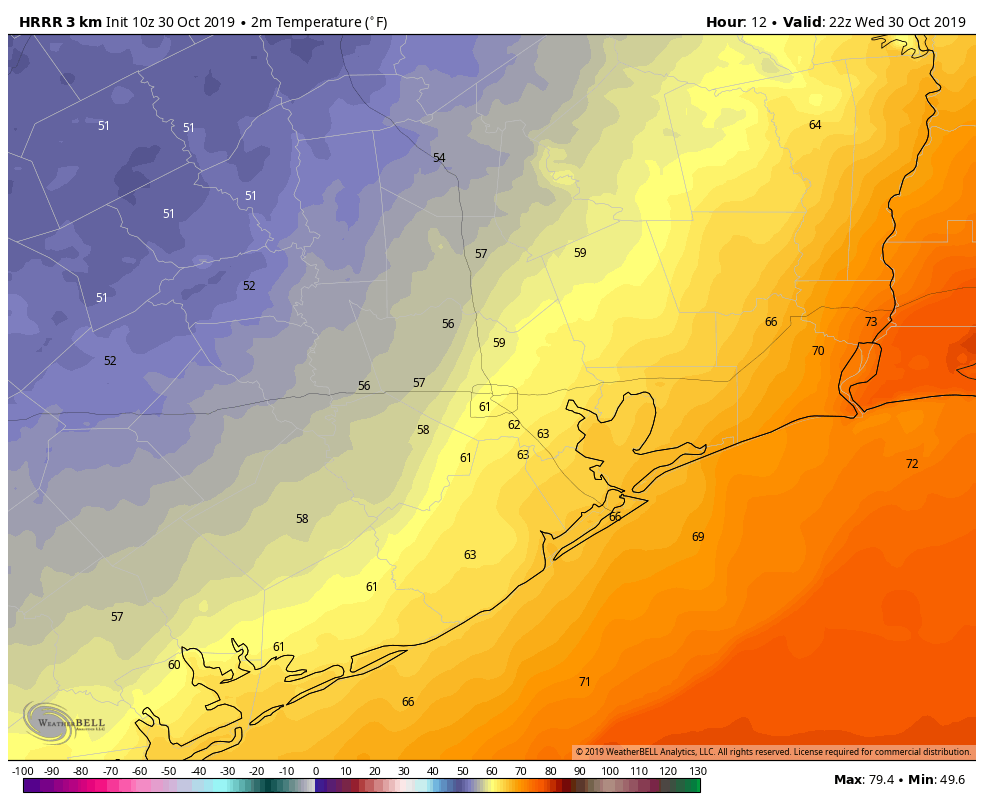 The rest of the front, meaning a much deeper mass of colder air from higher up in the atmosphere, will push through Houston tonight, and this will drive the potential for some heavier rain, most likely between about 10pm Wednesday and 6am Thursday, moving from inland areas toward the coast. Again, these showers shouldn’t last too long, but some areas may have the potential for 1-3 inches. (Most of Houston will likely see less than 1 inch of rain). Temperatures Wednesday night will get down to around 40 degrees for most locations.

Halloween is going to be a howler. Rains should end by or before sunset, and clouds should dissipate some time in the late morning or early afternoon. But it will be breezy, with wind gusts above 20 to 25 mph as a much colder and drier air mass blows into Houston. (There is a gale warning for coastal waters). Despite the sunshine, highs on Thursday will only reach the low- to mid-50s, so for many trick-or-treaters the temperatures will already be in the upper 40s by early evening. Bundle those kids up.

The temperature forecast continues to trend colder for Thursday night, with the possibility of a freeze in places like Waller and Montgomery counties. Most of Houston should stay in the mid- to upper-30s, but places like Huntsville, College Station, and elsewhere could record their first freeze a few weeks earlier than normal. 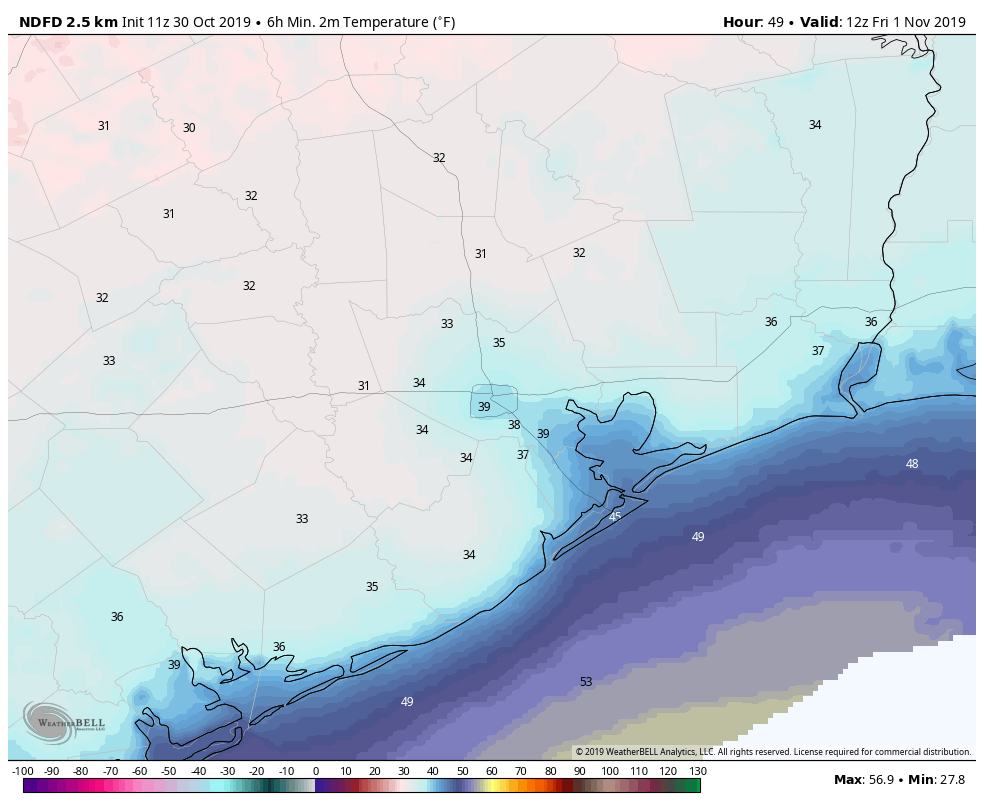 These should be cool days, with highs of around 60 degrees, and partly to mostly sunny skies. Overnight lows will probably be a few degrees warmer, likely in the low 40s for most of Houston, but there’s some uncertainty in that with a reinforcing front possible.

Perhaps a shade warmer than Saturday, but still cool for this time of year with highs in the 60s. Partly sunny skies.

Yep, Houston will be cold this weekend. (Weather Bell)

Beginning Monday the onshore flow returns, and after this we will probably see highs returning to the 70s, with lows rebounding into the 60s. With the return of clouds rain chances will jump up too, but we’re not tracking any aggressive storm systems.

19 thoughts on “Jack Frost is knocking on your door, and he’s not a trick-or-treater”