Storms are firing again this morning, primarily to the south and east of Interstate 69, where a few areas have already picked up 1.5 inch of rainfall. We’re going to remain in a pattern where there is the potential for storms through the next 12 to 24 hours before higher pressure returns to the area until the weekend. 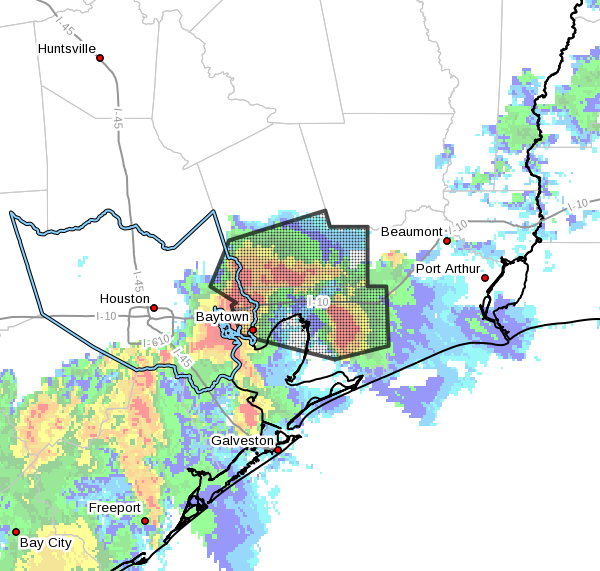 An areal flood advisory is in effect for the hashed area through 9:15am. (National Weather Service)

Overall, our atmosphere should remain moist for pretty much all of today, with precipitable water values of 2 inches or greater, meaning it won’t take too much of a spark to generate showers and thunderstorms. This pattern will allow for the development of on-and-off showers, moving generally to the east-northeast. Unfortunately, storm movement will be fairly slow, which will allow for some areas to see totals of 1 to 3 inches, and some street flooding. Although the rain has developed near the coast this morning, various models show the potential for development at most any location later today. Clouds and intermittent showers should help keep highs in the upper 80s for most of the region.

Pressures begin to build, and this should help to limit storm activity. However, with a still-moist atmosphere, I think at least about 30 percent of Houston should see at least some brief showers. Highs will get into the low- to mid-90s, as some sunshine returns.

Moisture levels will drop a bit, and higher pressure should limit us to mostly just a few rogue showers. Otherwise we can expect mostly sunny skies and highs likely in the mid-90s.

The forecast for the weekend remains somewhat tricky, which is to say we probably will see some scattered storms but probably nothing too organized. I’d peg rain chances at somewhere between 20 and 40 percent, and am not overly concerned about significant accumulations. Of the two days, Sunday looks a bit sunnier, but both days should see a mix of sunshine and clouds. Highs probably will hang out somewhere in the low 90s.

High temperatures of only 90 degrees to start July? (Weather Bell)

The forecast models are really struggling with the forecast for seven to 10 days from now. On one run, they’ll bring in a healthy chance of rain (including storms for the Fourth of July) and on the next they’ll be pretty dry. I think, given the time of year and likely absence of a dominant ridge of high pressure, we could see additional storms next week like we’ve seen on Monday and Tuesday. Highs also appear manageable, perhaps around 90 degrees. But that is a forecast very much undecided.