Well Houston, we’ve made it to the start of August. Historically this is the hottest, steamiest month of the year, when the average high is 95 degrees, and the average low 75. I look at it like this: If you’re in Houston in August and the high temperature is not in the upper 90s or higher, the streets aren’t flooding, and you’re not concerned about an impending hurricane—it’s a win. August is a month to survive, with the promise of better weather down the road. And hey, two days are already down!

Some surprisingly robust storms developed north of Interstate 10 on Sunday, and although the atmosphere is slightly less favorable today, we may see some additional development over inland areas this afternoon that moves southward toward I-10. This would start up during the warmest part of the day, with highs in the mid- to upper-90s, and potentially combine with the sea breeze. These isolated to scattered thunderstorms could produce briefly heavy winds and rains through the evening. Skies, otherwise, should be mostly sunny, with calm winds providing no relief during the hottest part of the day. Overnight lows will likely drop into the upper 70s. 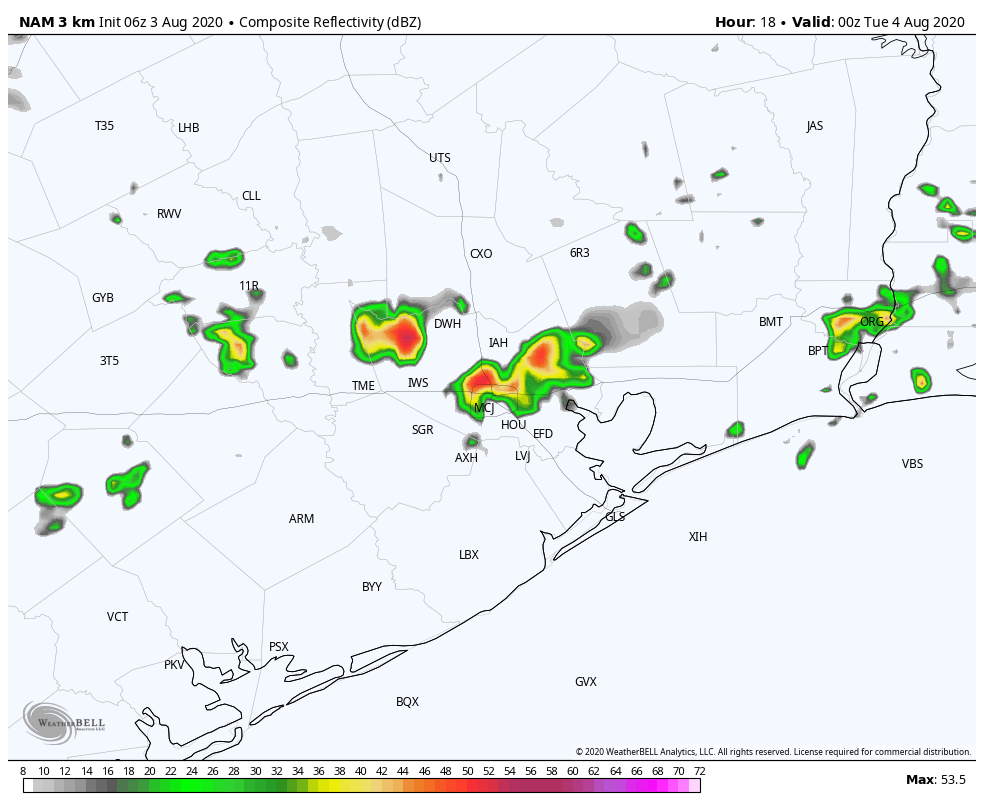 This should be a day similar to Monday, that starts out with sunny skies, but then sees development of storms during the hotter part of the day. Again, aerial coverage should be about 30 percent. High temperatures will likely reach into the upper 90s for inland areas, and a few degrees cooler along the coast.

Toward the end of this week high pressure will edge closer to the region, setting up a battle of sorts between high pressure and a moisture-rich atmosphere. Ultimately, we think this will bring about a pair of days with highs in the mid-90s, with partly to mostly sunny skies. So it’s going to be fairly hot. In terms of rainfall, we’d guess the second half of the week will see about a 20 percent chance of rain each day, but our overall confidence in this forecast is not great given the uncertainties mentioned above.

Rain chances may increase a bit over the weekend as high pressure eases off, and our atmosphere turns a little bit more unsettled. For now I’d expect highs in the low- to mid-90s, with perhaps a 30 percent chance of rain. Skies still look to remain partly to mostly sunny, so if you are planning outdoor activities it may be a situation, again, where you check the radar before heading outdoors.

This week will be hot, but not too hot for August. (Weather Bell)

As Tropical Storm Isaias works its way up the U.S. East Coast, the Gulf of Mexico is placid for this time of year. The first 10 days of this month look pretty quiet, so we don’t have much to worry about. Matt will have a full update tomorrow with the longer-range outlook for the Gulf and beyond.

6 thoughts on “August begins, and as always it will be a month to survive in Houston”