In summertime, few things are coveted more in Houston than a cold front, and as we flip the calendar from July to August, we’re going to get just that. Now, don’t get too excited. It is not really going to translate into opening the windows and letting the gloriousness flow.

It’s not going to feel quite this nice this weekend, unfortunately.

Rather, this will probably bring us some rain chances, perhaps some strong storms today, and maybe a tinge less humidity than we’ve had late this week. But beyond that? Not much. We never really, truly cool off. Let’s go through the details

For the most part, today looks fine. Expect a mix of sun and clouds, along with very hot weather. Look for mid-90s and high humidity. Rain chances in Houston and points south should be confined to primarily just a passing downpour. During the afternoon, we expect showers and storms to fire up between Dallas and Huntsville. Those storms will drop into the northern third of the metro area by late afternoon, with places like Conroe or The Woodlands or northwest Harris County standing the best chance at storms before 5 to 7 PM or so. 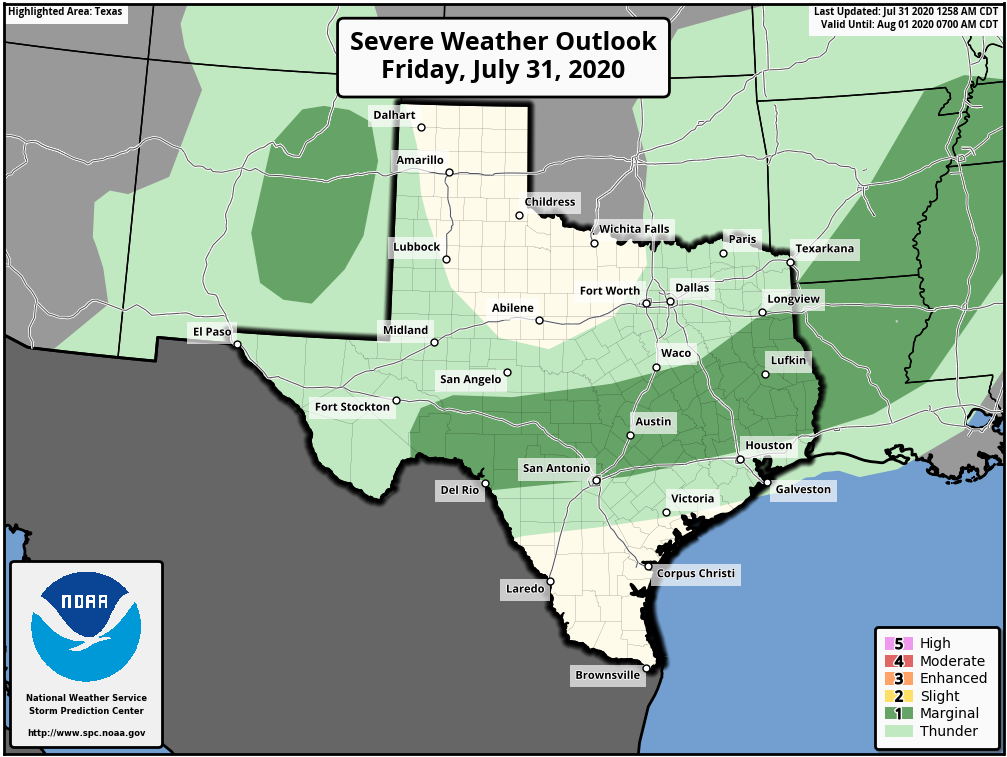 The Storm Prediction Center has areas north of Houston in a “marginal” (1/5) risk for severe weather today. Any severe storms should be fairly isolated. (NOAA)

Storms today do have the potential to be strong to severe, but we don’t expect widespread severe weather or anything like that.Strong, gusty winds and hail would be the main risks from the strongest storms.

The front will slip into metro Houston tonight. The strongest storms should begin to ease up a bit after sunset, but we wouldn’t be shocked to see some noisy storms with locally heavy rain moving through the I-10 corridor and just south through late evening and toward midnight. We should see storms generally dissipate after midnight, but if they were to continue going, it would areas south of Houston most likely to see them.

With showers and storms generally expected to diminish overnight, we think Saturday will start mostly quiet. However, if there are some morning showers or rumbles of thunder, they would likely be close to the coast or well south of Houston toward Matagorda Bay.

I have to be honest here: Given recent model performance of late, there is still see some uncertainty in exactly how things may transpire tomorrow. But in general, look for some additional showers and storms to fire up along what is left of the cold front south of Houston (Brazoria, Matagorda, Wharton, and Jackson Counties most likely) before it dissipates. Additionally, there could be some storms that fire to the west of Houston Saturday afternoon, perhaps near the Katy area north toward Waller and Grimes Counties.For the city of Houston and points north, much of tomorrow could be a quiet and fairly pleasant summer day. But I would not place rain chances at zero. Highs will be in the low-90s with morning lows in the 70s.

Sunday’s forecast is a bit tricky as well. The front should have basically lost any definition and fallen apart by Saturday night and Sunday morning. But there will likely still be enough of a “trigger” for thunderstorms around. However, with atmospheric moisture generally on the wane, we suspect Sunday’s storm coverage and rainfall intensity will be less than we see on Saturday. All that said, I would probably take a more pessimistic stance on Sunday than what models are explicitly showing right now (which isn’t very much in the way of rain). So let’s expect scattered storms and hope for better on Sunday.

Sunday’s high will top off in the low-90s with storms, mid-90s with only a handful of them, and we’ll see morning lows in the 70s. 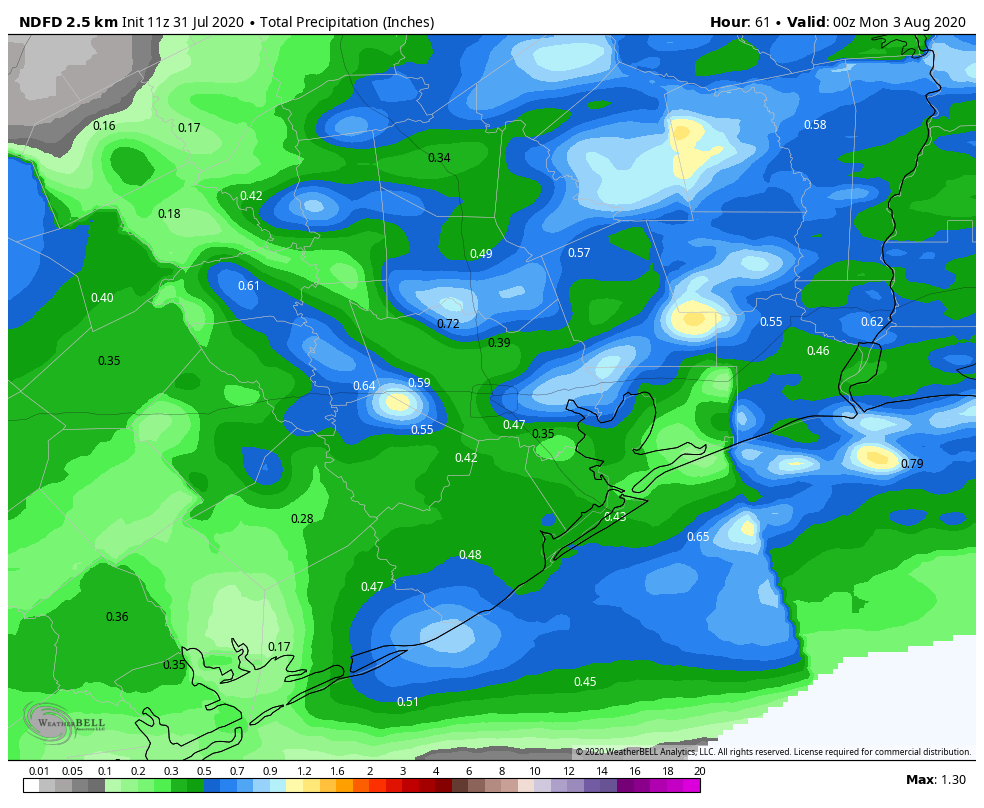 Rainfall this weekend will be erratic, with some folks seeing little to no rain, others perhaps seeing a couple inches, and many seeing something in between. This map gives you an idea of where the heaviest is currently expected to fall, though that could change. (NWS via Weather Bell)

Total rainfall this weekend? Some may see locally heavy rain that could add up to an inch or two or even more. Others may not see much of any rain at all. And still more of us will see something in between, closer to a tenth or quarter-inch. The map above should just give you a rough idea of where the heaviest rain could fall.

The weather pattern over the Eastern U.S. early next week will be an anomalously cool one, which is why we are not concerned about Hurricane Isaias here in Texas. A large trough, or dip in the jet stream will carve out over the Mississippi Valley. We’ll be on the periphery of that, and as little disturbances pinwheel around that trough, they should serve to help set off some greater storm coverage.

Monday looks like a fairly quiet day at this point, with just a few showers and storms during the afternoon. Tuesday or Wednesday could be a bit more active, with slightly higher storm chances, as there should be more atmospheric moisture available. The timing of some of these features may change, so we don’t want to go too overboard on a stormy or dry forecast on any given day right now. Check back in Monday for the latest.

Beyond early next week, it appears that we will resume a typical August weather pattern featuring an isolated storm chance each day and sunny, hot, humid weather otherwise.

Isaias strengthened into a hurricane overnight as it emerged off of Hispaniola. This morning, it has maximum sustained winds of 80 mph and it is moving off to the northwest at a healthy clip. Isaias is expected to move across the Bahamas, slow down a bit and turn more northerly as it approaches Florida. While not currently expected to be as strong as either of these previous storms, there are some echoes of 2016’s Matthew and 2019’s Dorian in terms of this track and how it approaches Florida. 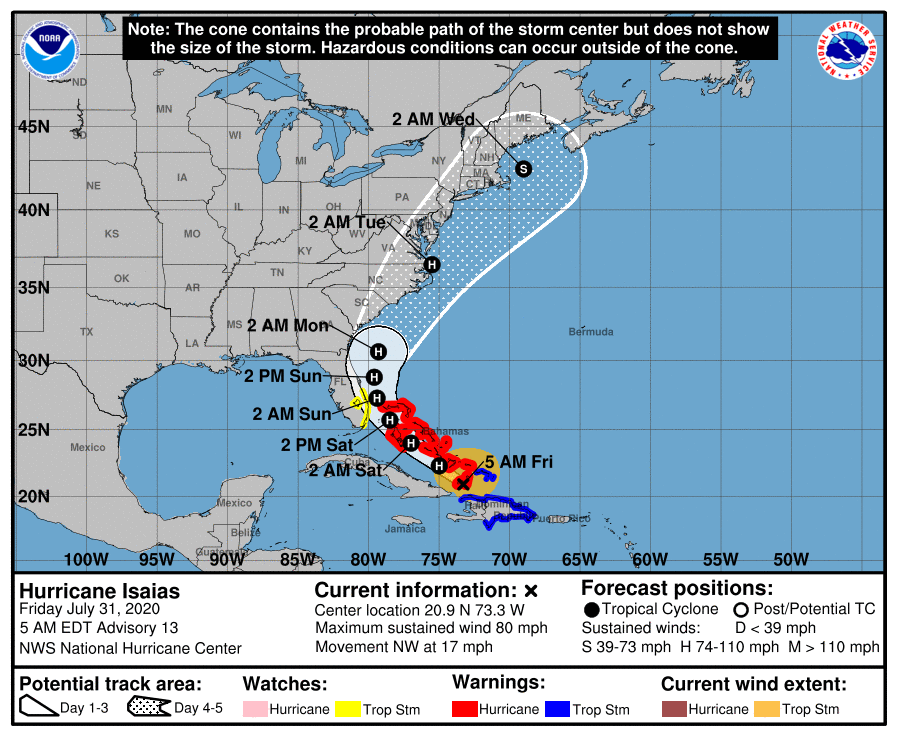 Isaias will take a track that has become somewhat familiar over the last few hurricane seasons, likely brushing the Florida coast before racing off to the northeast. (NOAA)

Isaias is expected to parallel the Florida coast and lift up through the Carolinas, before racing up into New England or just offshore. There’s still considerable uncertainty on the exact timing and track of this storm as it gets up toward the Mid-Atlantic and Northeast. By Tuesday morning, the center of Isaias could be anywhere from Cape Lookout, NC to Cape Cod. Heavy rainfall is likely up the Eastern Seaboard with flooding a possibility in spots.

10 thoughts on “July to end with a cold front? Really?”