The forecast today will be one of heat, followed by a somewhat uncertain outlook this weekend. Let’s walk through things, and then we will touch on Louisiana and Barry.

The expectation right now is that today will be a mostly dry day in Houston. That said, I cannot entirely rule out some showers late this afternoon coming in off the Gulf along the coast or out of Louisiana for folks east of I-45. As long as it stays mostly dry though, it’s going to be awfully hot once again today. We should make a run for the upper-90s. 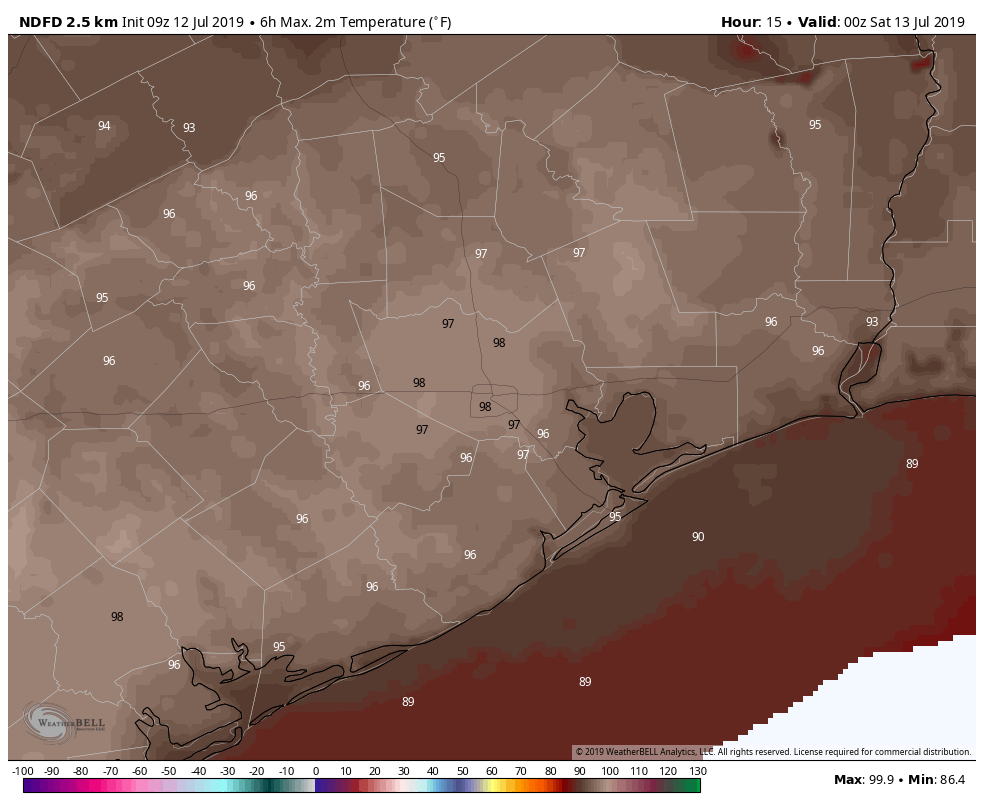 It’s going to be very hot today, even along the coast, where offshore flow will limit a cooling sea breeze. (NWS via Weather Bell)

Heat advisory criteria may come close to being met in parts of the area, so if you’ll be outdoors, please take it easy. Also, keep that in mind if you’ll be on the beach today, as high temperatures in Galveston will likely make a run for the mid-90s with mostly offshore winds.

Given the somewhat erratic nature of storms around Barry (see below), as it begins to approach Louisiana tonight, some of the outer fringe that has been fairly supportive of occasional clusters of storms may graze our area. So we will call it partly to mostly cloudy tonight, with a very slight chance of thunderstorms, virtually at anytime. We should know more about those prospects later this afternoon and will update you then.

We could have a tale of two types of weather across the Houston area Saturday. For simplicity, we will use I-45 as our dividing line; the reality is it could be more to the east or west of that line, but it works for a generalization. West of I-45 could be partly sunny and hot. High temperatures may approach the mid- to upper-90s again. This would be most likely in places like Navasota, Katy, or Rosenberg. East of I-45 might be susceptible to more outer bands of Barry, which could yield occasional showers and thunderstorms and temperatures more erratic, ranging from the low-80s to mid-90s depending on who sees rain. This would be most likely for places like Galveston, Baytown, or Liberty. 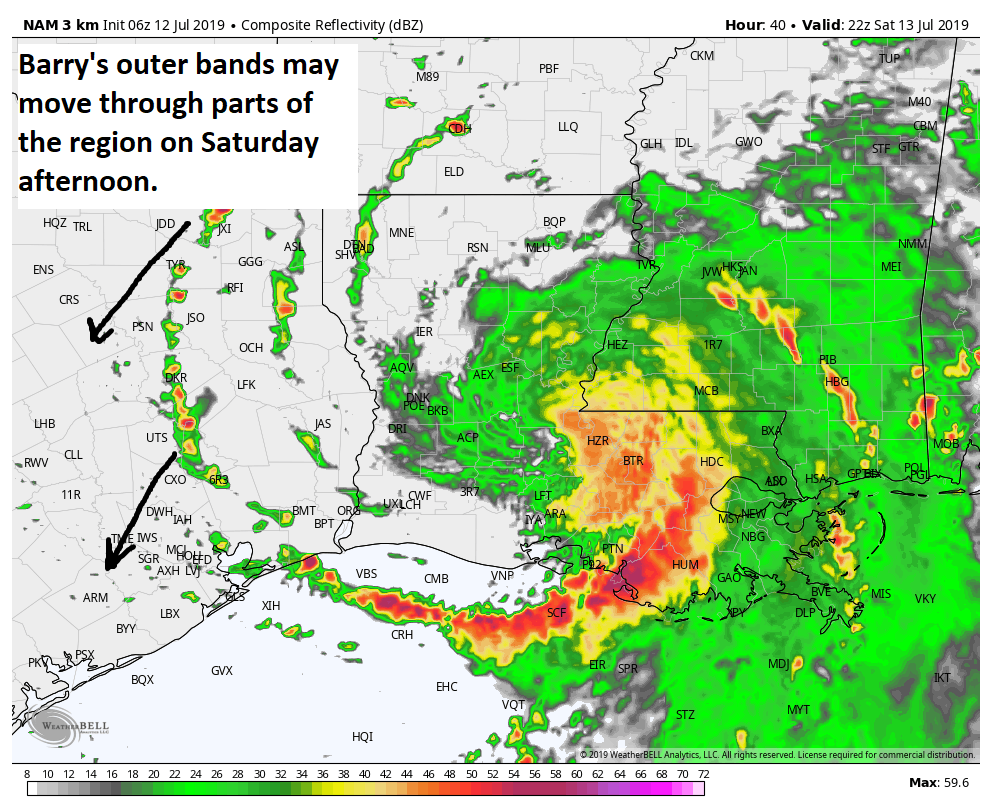 This late afternoon forecast of how radar *might* look on Saturday shows small outer bands of Barry possibly dropping south and west into the area. Rain on Saturday is possible anywhere, but most likely along the coast or east of I-45. (Weather Bell)

The general rule? The more to the east you go or closer to the coast you are, the more likely you will be to see showers or storms. Galveston will see a good chance for at least some storms, so stay lightning aware if you’ll be on the beach. Also keep in mind that any rain could be heavy at times.

As Barry moves inland into northern Louisiana Saturday night through Sunday, things will begin to change a bit in our area. Modeling suggests that some type of convergence axis is going to set up either offshore or near the coast and Bay Area. It’s not yet a serious concern, but we will want to keep tabs on this. 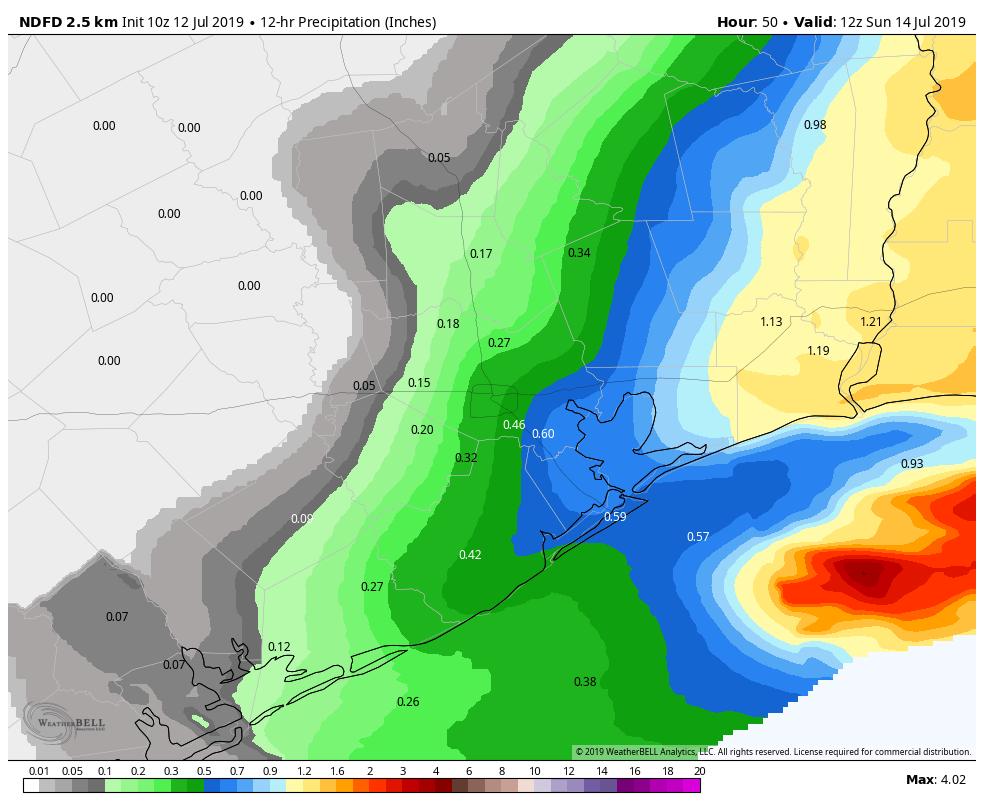 The current (as of 5 AM Friday) NWS rainfall forecast for Saturday night through Sunday morning. Heavier amounts will be possible near Galveston and the Bay Area. (NWS via Weather Bell)

At best, we see an inch or less, with the majority staying offshore, closer to the convergence (or where rising air yielding clouds and rain is maximized). But if this “axis” sets up over Galveston or the Bay Area, you would be talking about slow moving or stationary band of moderate to heavy rainfall that could yield street flooding. Totals would be 2 to 4 inches or more for places like Galveston and Kemah and Texas City under that scenario. We will know a little bit more later today and hopefully much more Saturday morning. Stay plugged into the forecast.

Farther inland, it would be a mix of clouds and sun and hot on Sunday, with highs reaching for the mid-90s.

A few lingering showers could be left behind on Monday, so I won’t promise a dry day. But overall, the chance of rain begins to scale back considerably here and especially on Tuesday. We fall back into a limited moisture pattern, with only a handful of daytime thunderstorms on the sea breeze each afternoon. This would likely last from Tuesday straight into next weekend.

Barry is slightly better organized this morning, but it will not win any cyclone beauty contests at all. The vast majority of the thunderstorms with Barry remain displaced well to the south of the center, which was located about 100 to 125 miles south of Morgan City, LA.

Tropical Storm Barry has 50 mph maximum winds and has a center located north of the deeper red colors, which indicate thunderstorms. This is not a well organized storm but is still a formidable rainmaker. (College of DuPage)

In terms of intensity, we are sitting with 50 mph maximum sustained winds, mostly in the eastern half of the storm’s circulation. If Barry can organize a bit more today, it will likely come ashore as a strong tropical storm or maybe a hurricane tonight and Saturday morning. That combination of gusty winds and broad onshore flow east of Barry’s center creates a sneaky storm surge risk in eastern Louisiana, Mississippi, and Alabama. This is a big reason why there were some concerns in New Orleans (although those concerns have eased up a bit).

In terms of track, even the outlier models you may have seen discussed a bit yesterday have shifted back to the east. Barry will make landfall somewhere in central Louisiana on Saturday. 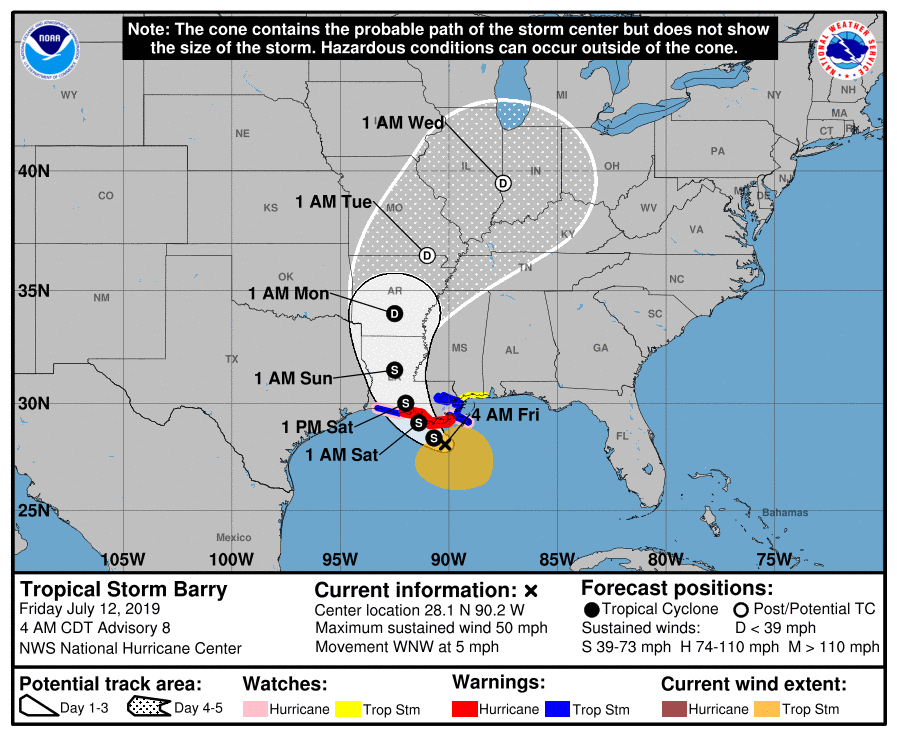 The forecast track of Barry takes it somewhere near or just west of Vermilion Bay on Saturday. (NOAA/NHC)

As far as rainfall goes, look for that to escalate a bit today in Louisiana and points east, with heavy rain likely in spots between Lake Charles and the Florida Panhandle. Heavy rains will maximize tonight and Saturday in those areas before lifting north and out. 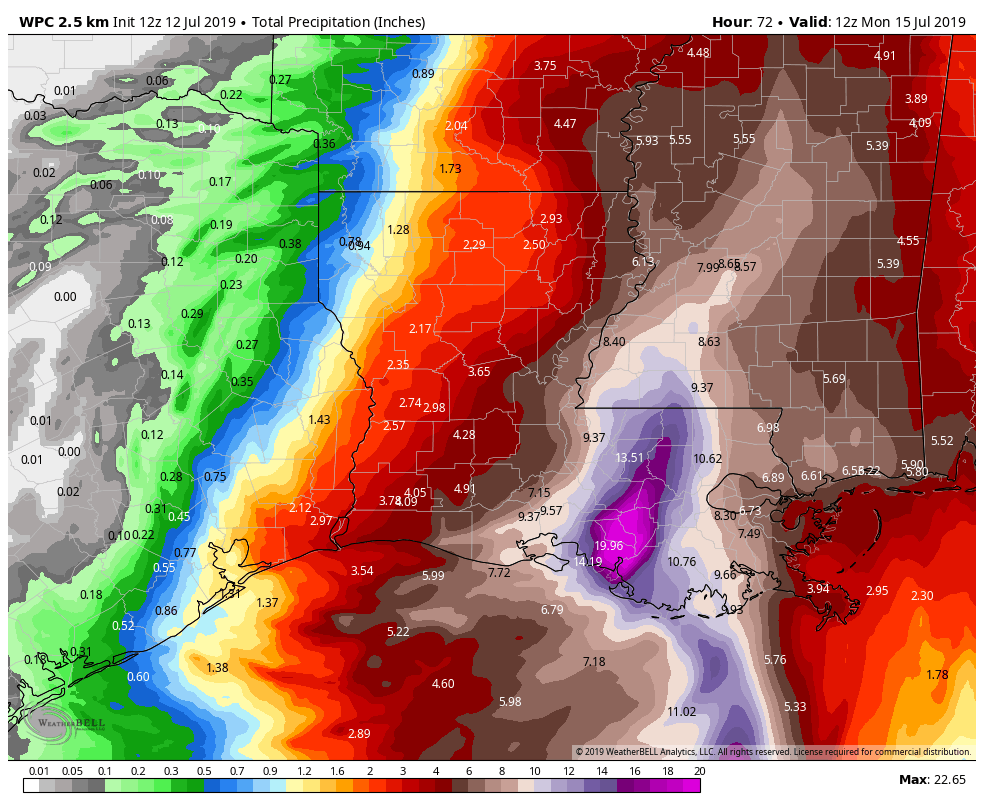 Total rainfall through Monday morning is expected to be considerable in central and eastern Louisiana, as well as Mississippi. (NWS via Weather Bell)

Total rainfall will peak in eastern Louisiana, averaging 8 to 16 inches, with pockets of 20 inches or more possible. Widespread issues with flooding are expected east of about Lafayette, LA.

We get so many questions about traveling. Here’s the most basic answer: For those traveling between Houston and points east, today may be doable, with most heavy rain south of there. But use caution if you must travel, as heavy rain and gusty winds could escalate later today.

Travel on Saturday east of about Lake Charles is not at all advised, as that should be the worst of the storm in those areas and east to Mississippi. Heavy rains may continue on Sunday, but weather conditions should improve along the route Sunday afternoon.

Unfortunately, there may be flooding issues on some routes Sunday, so if you absolutely have to travel then, you will need patience, a backup plan, and a way to get information on detours. Louisiana’s DOT has a good site and app. Heavier rains Sunday will fall in Mississippi and northern Louisiana. And watch for a band of heavier rain between Lake Charles and Galveston during Sunday.