If you’re a more weather savvy Houstonian, you’ve spent a chunk of the day with a satellite loop of Tropical Storm Barry open in a browser tab, checking it periodically and perhaps feeling a bit uneasy. And that’s completely understandable. The good news is this: Despite what your eyes are telling you, everything, forecast-wise, is still on track, and Barry is expected to move into Louisiana tonight and tomorrow.

Here’s what I’m talking about:

You thought that little swirl was the center about to make landfall? Nope. It’s a small part of the larger, broader center to the south that is slowly moving west and will turn northwest tonight. (College of DuPage)

From the above satellite image, you can see the adorable cinnamon bun-esque swirl south of the Louisiana coast today that now appears to be moving back southwest. Believe it or not, that is not center of Tropical Storm Barry. That is what we call a “mesovortex” swirling around the broader center that is to the south and will gradually turn to the northwest tonight. As Barry organizes a little bit healthier tonight, you’ll probably begin to see a slightly more traditional satellite presentation try to evolve. Wind shear will continue to limit how well organized Barry can become, but it would seem likelier than not that Barry becomes a hurricane tonight before making landfall tomorrow near Vermilion Bay. The turn will happen, we just need to be patient.

Impacts are mostly unchanged, with major rains expected to slog inland tonight and tomorrow over Louisiana and Mississippi. Heavy rain is likely between Lafayette and New Orleans, though the more recent rainfall forecast have backed down a bit in NOLA, which is good there, but a lot of rain is going to fall upstream over the Mississippi. Maximum totals should be 15 to 20 inches, probably not far from Baton Rouge. 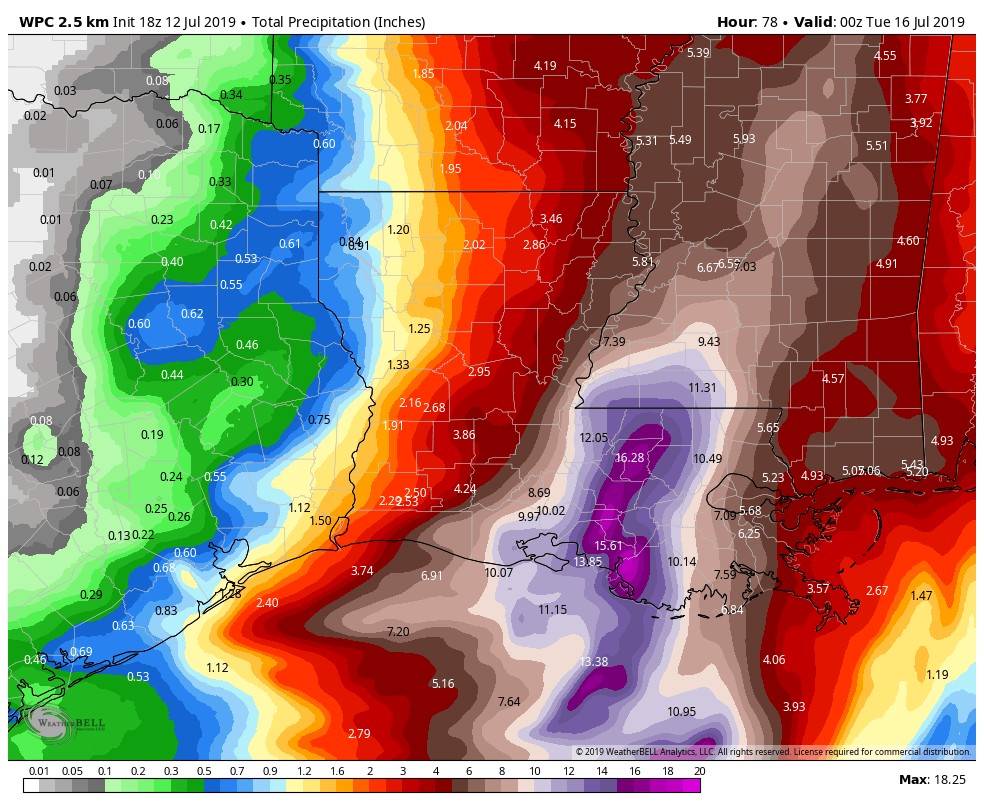 The heaviest rainfall now looks to be west of New Orleans but still across eastern or central Louisiana. (NWS via Weather Bell)

This morning I discussed the possibility of heavier rain potentially near Galveston or the Bay Area. Basically, we expect some type of inflow band, or an area of converging winds to setup near the coast tomorrow night and much of Sunday. If that happens, locally heavy rain will be possible, particularly along the immediate coast. The rainfall forecast above shows about 1 to 2 inches potentially near Galveston, with less as you come inland. We will have to refine this tomorrow a bit, just in case the heavier rains stay offshore or to our east, or alternatively look heavier over Galveston. For now, in Galveston, expect a forecast of persistent rains on Saturday night and Sunday with occasional showers or clouds inland from there. Saturday is probably a satisfactory beach day, but Sunday may be a loss. We will reassess how things look in the morning and offer you another update then.