As expected, an area of showers moved through the metro area this morning prior to sunrise, dropping 0.5 to 1.5 inch of rain for most of the region. This mass of showers has now pushed east of the area, and as of 6 a.m. the trailing edge was about half way between Houston and Beaumont. A gusty front will follow this afternoon or evening.

Some scattered showers will remain possible today until the early afternoon hours, but we’ll see nothing like the organized storms that pushed through earlier this morning. Skies may even become partly sunny this afternoon before westerly winds kick in and a strong front arrives.

This front may produce a very thin line of storms, or a few scattered thunderstorms, as it moves through, but for the most part I think it will probably be dry in terms of rainfall. This westerly flow will push temperatures down this evening, and we can expect a gusty overnight with lows generally in the mid-40s. If you’re heading out this evening, please bring at least a windbreaker. 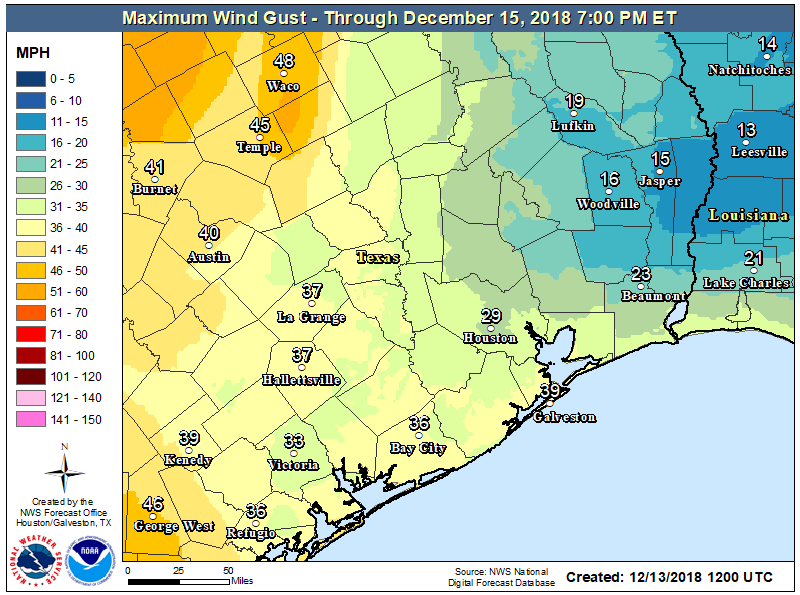 This will be a cold, gray, and windy day—with gusts up to about 30mph or perhaps a bit higher along the coast. Highs for most parts of the region will barely reach 50 degrees. Despite mostly cloudy skies Friday night, lows still should drop down to around 40 in most of the city.

A fairly nice day, as skies should be clearing out during the morning hours. Despite the sunshine, the day will remain on the chilly side, with a 10 to 15mph northwesterly wind and highs perhaps only making it to about 60 degrees.

This will be the prime pick for the weekend, with light winds, highs in the mid-60s, and fully sunny skies. Can’t wait!

Our weather will fall into a fairly steady pattern next week, with partly sunny skies, highs generally in the 60s, and lows in the 40s or 50s. Some rain showers may be possible next Wednesday or Thursday, but there’s no strong signal for it. 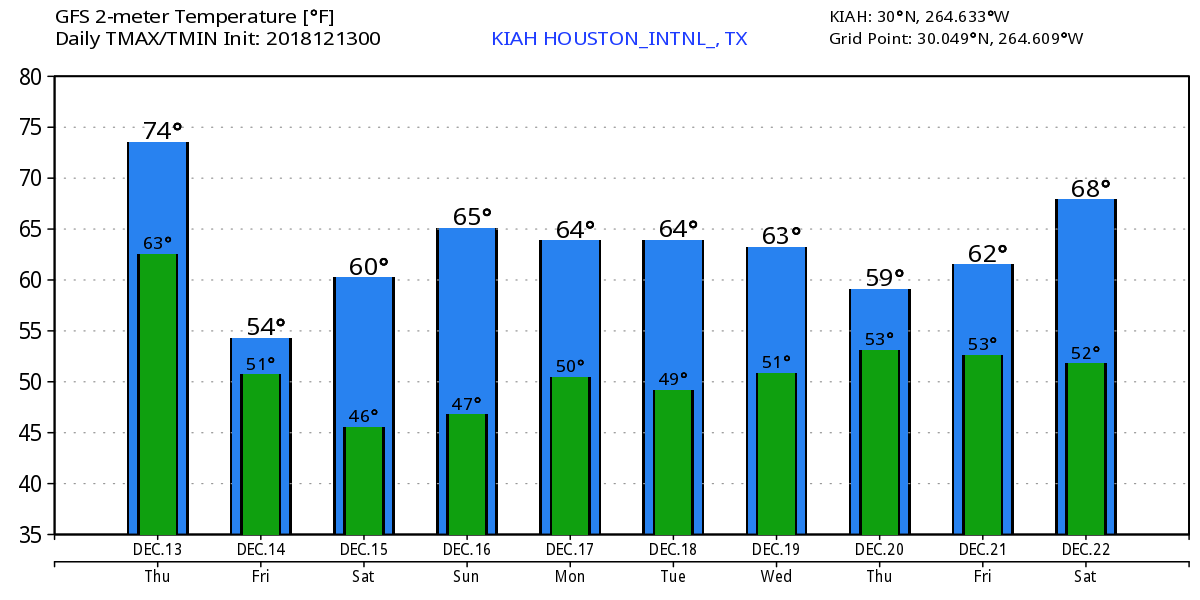 I promised to look ahead at the forecast for Christmas Day. We’re still 12 days away (or only 12 days away, depending on how your shopping is going!) so the forecast comes with the usual caveats. There’s not much clarity in the models (for example, the ensemble run of the European models has a range of high temperatures from 40 to 70 degrees), but the higher confidence range runs from 50 to around 65 degrees. The GFS model is in the same range.

The big picture is that, at least right now, the forecast models are trying to bring in a cold front to the region about two days before Christmas right now. Weather on the holiday will depend on the timing and strength of that front.

7 thoughts on “Breezy front coming, with cooler weather ahead for Houston”