Good morning. It’s cool again this morning, with temperatures in the mid-40s to about 50 degrees. But we’ll warm up pretty quickly.

We’ll see increasingly strong southerly winds today with a tight gradient stretching from high pressure in the Gulf of Mexico toward lower pressure centered over Colorado, Nebraska and Kansas. This should bring some clouds later today, due to increasing moisture levels, as highs climb into the mid-70s. Low temperatures tonight will only fall back to around 60 degrees. 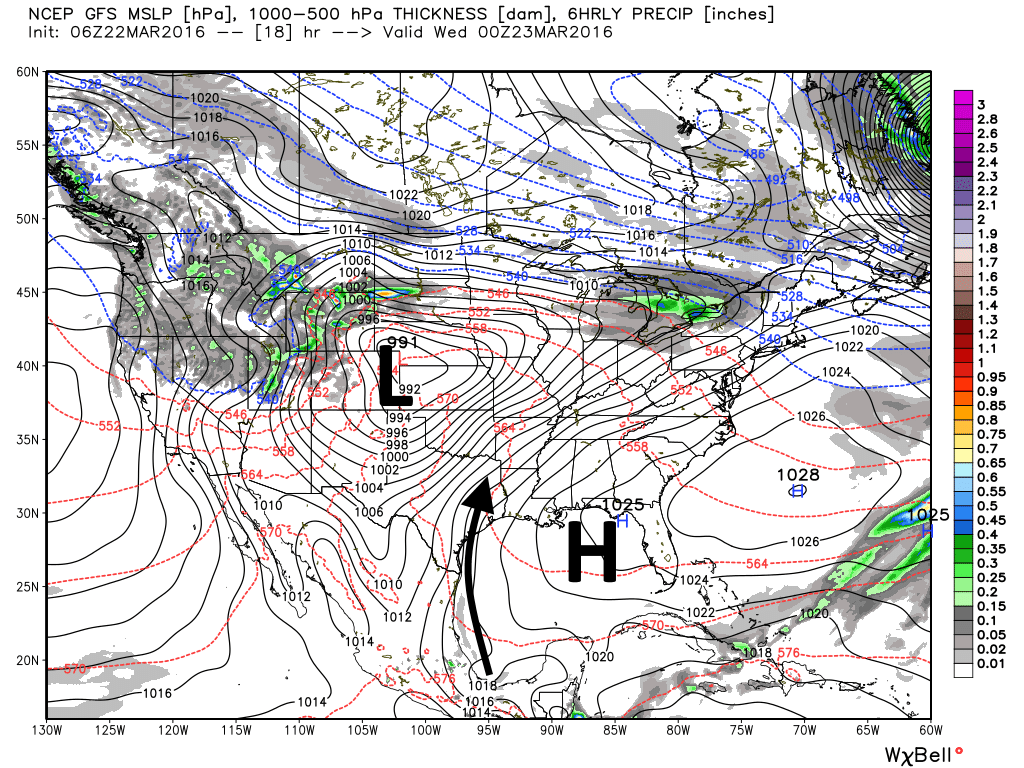 The mid-level of the atmosphere forecast for today shows the distinct pressure gradient. (Weather Bell)

We’ll continue to see breezy conditions on Wednesday with southerly winds, and we’ll likely see increasingly cloud skies as highs climb to near 80 degrees. There’s the slight possibility of rain during the day, but rain chances increase Wednesday night and Thursday morning.

Showers are most likely to develop along a cold front that should move through the area between midnight on Thursday and into the Gulf beforenoon. Beyond a few thunderstorms I would not expect much severe weather with the front, and most areas will likely only see a tenth of an inch of rain or two. Skies will begin clearing during the afternoon hours but winds will remain brisk out of the north, gusting into the low 20s.

A beautiful, sunny day with highs near 70 degrees.

Warmer, but still pleasant and probably partly to mostly sunny, with highs in the upper 70s.

Another cold front appears likely to pass through on Easter. It’s not clear whether this will come during the morning or later in the day, but it’s worth watching because it has the potential to bring some scattered rain and breezy conditions.