It’s a chilly morning across the region, with lows ranging from 35 degrees in Huntsville to around 50 along the coast. As high pressure dominates our weather, conditions will remain quiet until later this week, when a storm system will combine with ample Gulf of Mexico moisture to produce widespread showers and thunderstorms across the region. Some street flooding appears possible Friday night, but fortunately the system won’t linger as a strong front scours the region on Saturday morning.

Cool today, with a northerly flow. Despite sunny skies, highs probably will only get up to around 60 degrees. Nighttime temperatures will be similar to Monday night. 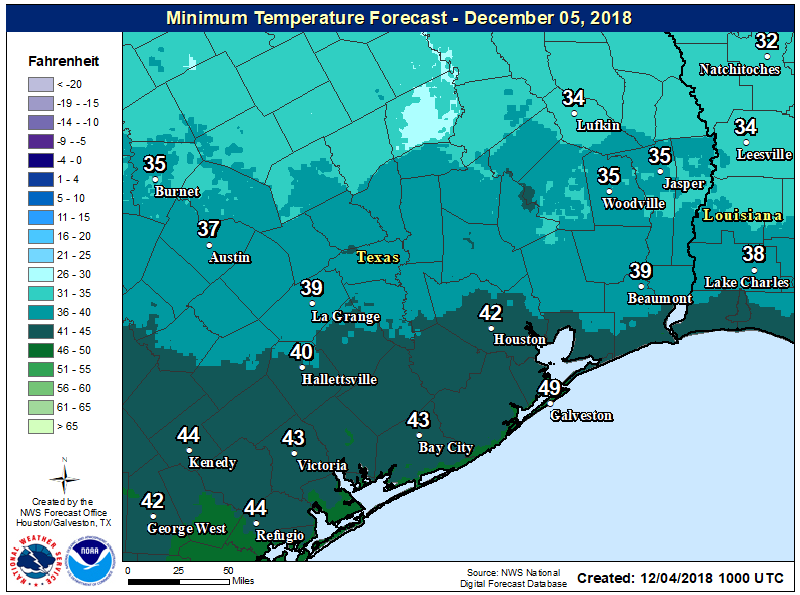 Tuesday night should be another chilly one for Houston. (National Weather Service)

Northerly winds will shift to the east, but that won’t mean much during the daytime, as we can expect another sunny day with highs of around 60 degrees. The more easterly winds should help to moderate overnight temperatures, however, with lows by Thursday morning generally in the upper 40s and 50s.

Winds continue their rotation, and will come out of the southeast on Thursday, and this should lead to a mostly cloudy day with highs in the upper 60s to around 70 degrees. Rain chances are quite low, but not non-existent.

The onshore winds that kick in Wednesday night will pile moisture into the atmosphere. Meanwhile, a potent low pressure system will sweep eastward, across Mexico and the Southern United States toward Texas. This system should promote rising air, and lead to a very healthy chance of showers and thunderstorms, especially on Friday night into Saturday morning. (Temperature wise, we’ll probably remain in the 60s throughout this period).

In terms of timing, right now the forecast models generally peg the heaviest rain west of Houston around midnight, and pushing through the city between midnight Friday and sunrise on Saturday. The storms move east by mid- to late-morning as a strong front sweeps through. 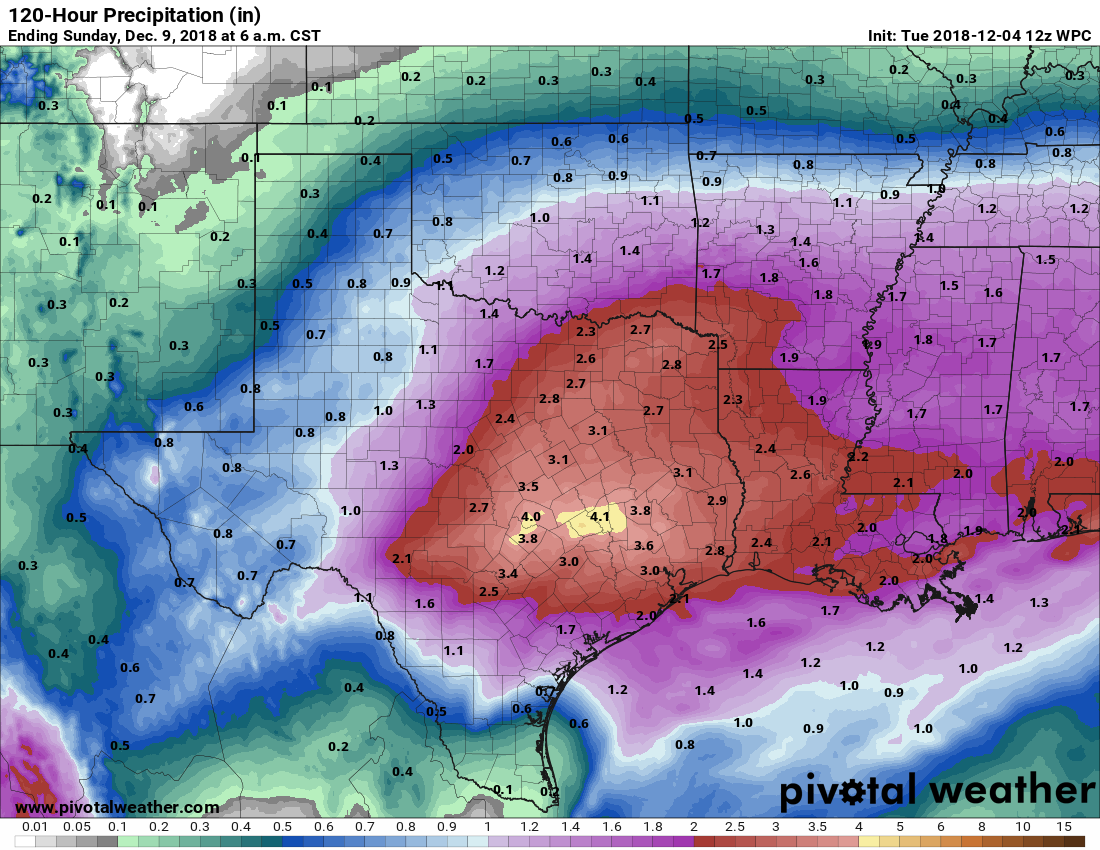 As for accumulations, I think most areas can probably expect 2 to 4 inches of rainfall, but given the moisture levels available I’m pretty sure we’ll see some bullseyes of 6 inches or more on Friday night. Where this occurs in the greater Houston area simply cannot be predicted, but some street flooding is sure to occur during these heavier storms.

Saturday afternoon through Sunday, and beyond

Saturday should remain a mostly cloudy affair after the front moves through, with temperatures falling into the 50s. Nighttime lows probably will be in the 40s. Sunday will likely be a sunny, cold day, in the 50s, with a northerly wind. Temperatures will moderate some by Tuesday or Wednesday, and rain should stay away until Thursday or Friday, at the earliest.