Temperatures this morning have fallen to around 40 degrees across most of Houston, and we’ll continue to see cold weather through the weekend. Super Bowl week will be warmer.

The weather today is more or less the same as what we’re going to see through Monday morning, with mostly north-northwesterly breezes, highs of about 60 to 65 degrees, and overnight lows around 40 degrees, give or take. Skies will remain mostly sunny. 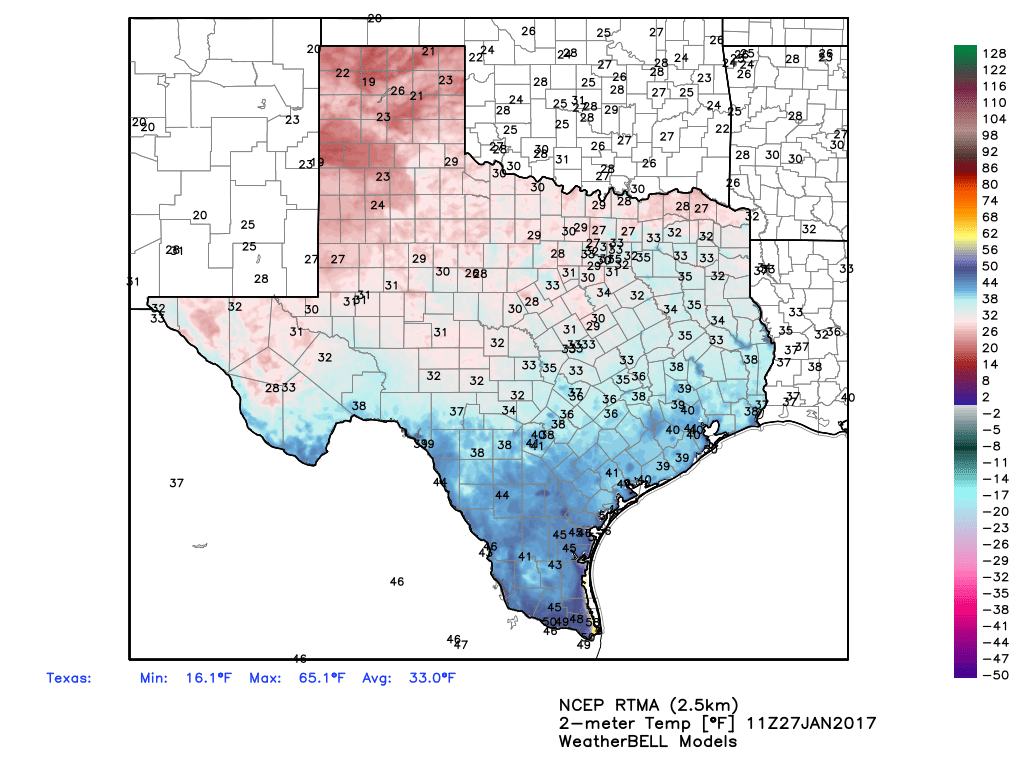 The average temperature in Texas this morning is nearly at the freezing level. (Weather Bell)

The forecast for the first half of Super Bowl week is pretty well locked in too. Highs by Monday will rise into the upper 60s, and should reach the lower 70s by Wednesday. Overnight lows, too, will gradually climb from the low- to mid-40s on Monday morning into the 50s by Wednesday morning. Rain chances will remain near zero, however, as the onshore flow doesn’t really begin to pick up until Tuesday, as after such a period of prolonged drier air advection it will take some time for moisture levels to recover.

So what’s the outlook for Super Bowl weekend? After about Wednesday confidence in the forecast falls off a bit, but the most likely scenario is highs in the low 70s through Super Bowl Sunday. However both the GFS and the European model agree that sometime next weekend, probably later on Sunday or Monday, the region’s next front is likely to come through. Both models are hinting that some moisture could accompany the front in the form of moderate to potentially even heavy rain, although those details aren’t at all discernible yet.

Right now expect a warm (for January) second half of the week, and conditions most likely to remain that way for Super Bowl Sunday. However due to uncertain timing of the front, there’s a chance the day of the game itself could be a bit messy in terms of rain and a frontal passage. We’ll keep an eye on it.

Posted at 6:40am CT on Friday by Eric

One thought on “After a cool weekend, a warmer Super Bowl week in Houston”