It’s been a somewhat gloomy late week, but we will gradually see some brighter skies roll in late today and especially this weekend.

For most of us, Friday should start similarly, with a low, gray overcast. Clouds should gradually fracture a little, however I don’t think we will completely clear out today. But it won’t be the worst afternoon ever, with at least some sunshine. High temperatures will slowly warm to near or just shy of 60 degrees with a light north wind.

Skies should clear out tonight. We will see low temperatures bottom out in the 40s. 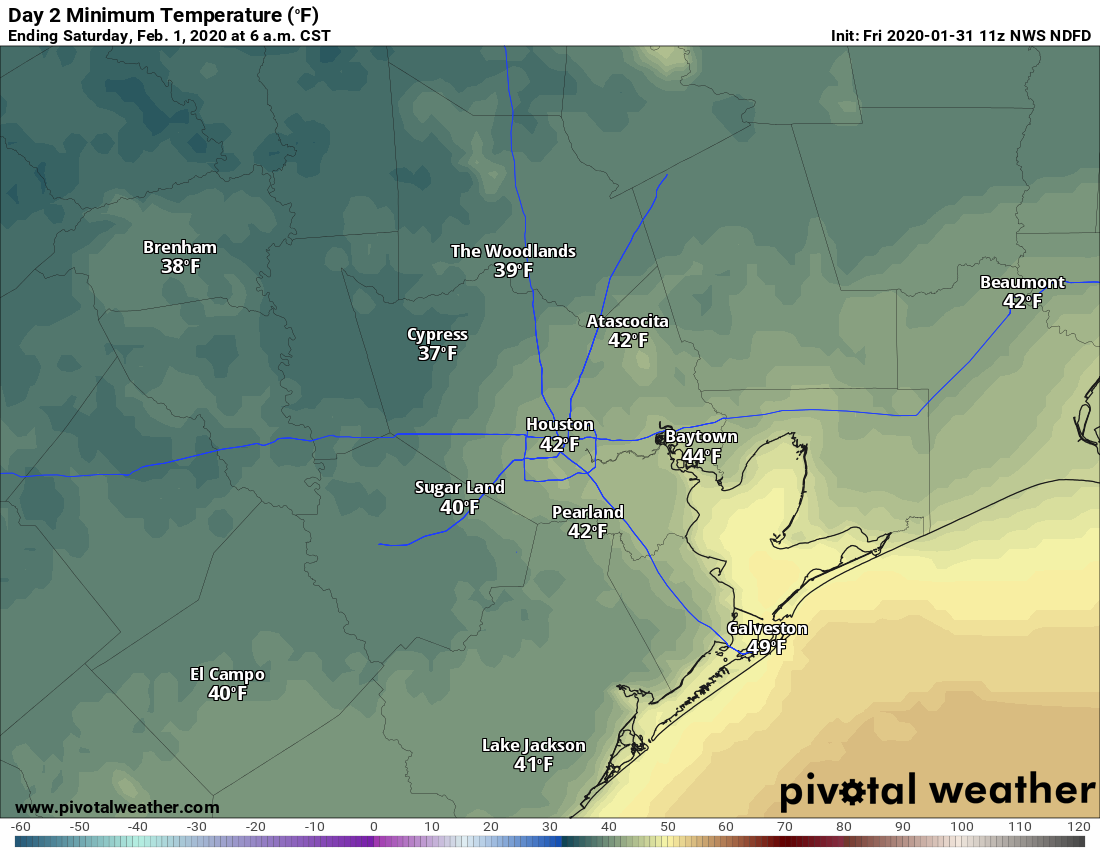 Overnight lows in the 40s for most of us tonight, with even some 30s Saturday morning, mainly north and west of Houston. (Pivotal Weather)

Both Saturday and Sunday look beautiful right now. Some high clouds may spoil the sky by late Sunday afternoon. But that would be all. If you have outdoor plans, you have the green light to go forth and enjoy on either day!

We should warm into the 60s on Saturday, drop back into the 40s Saturday night, and warm back up to near 70° on Sunday.

Onshore flow will begin in earnest again later Sunday into next week with humidity surging during the day Monday. With that should come some showers or perhaps a thunderstorm. Temperatures on Monday will warm from the 50s into the 70s. By Tuesday, we will be in the soupy, mild weather ahead of the next cold front. Showers will be again be possible, but I suspect most of the rain Tuesday will fall off to our north or east. All of this leads into a pretty strong cold front passing through the region either late Tuesday night or Wednesday. To me, this looks like our strongest cold front in some time, with temperatures likely to plunge back through the 50s and 40s after it passes. It appears that 30s may also be possible, but as of right now a freeze looks unlikely in Houston.

Showers and thunderstorms will be likely Wednesday, with clouds and moisture likely staying in place into at least Thursday morning.

Can it snow next week?

There has been some talk floating around about wintry precipitation possibly occurring to the north of Houston (think Huntsville) in the wake of the front next week. Warning: I’m going to get a little technical here!

Quick, simple summary: It is unlikely that we will see any snow or sleet in our area next week. There is, however, a narrow window late next Wednesday or Thursday morning where it’s possible (just not likely) that something frozen could fall from the sky, mainly well off to the north of Houston or even Huntsville. A few more things need to happen than are currently showing up on the models, but it’s definitely worth continuing to watch.

Now let’s get under the hood. Explicitly on weather modeling today, any wintry precip is showing up well to the north of even Huntsville, toward perhaps Crockett or Palestine. Dusting off my years of forecasting winter weather in the Northeast, I definitely see a really narrow window where this makes sense and upper air conditions could theoretically support something frozen falling from the sky on Wednesday night or Thursday morning in that region. The overall large-scale pattern is one that isn’t too dissimilar from others that have produced a chance of wintry precip in Texas in the past. But is it enough and can it get south, say to Huntsville?

To check on that, I am going to take an atmospheric sounding from the Euro model, courtesy of Pivotal Weather. A sounding is basically a vertical profile of various parameters in the atmosphere. In winter, we would use this to determine what type of precipitation might fall in a cold scenario. Are temperatures below freezing all the way up? Then, that’s probably snow. Do temperatures warm above freezing somewhere above our heads for a brief time, but drift back below freezing? Then, that’s probably sleet or ice pellets. Is it above freezing aloft but near freezing on the ground? That would probably lead to freezing rain or sleet.

Here’s that sounding from the European model for 6 AM Thursday near Huntsville, TX. You should be able to click to enlarge this. 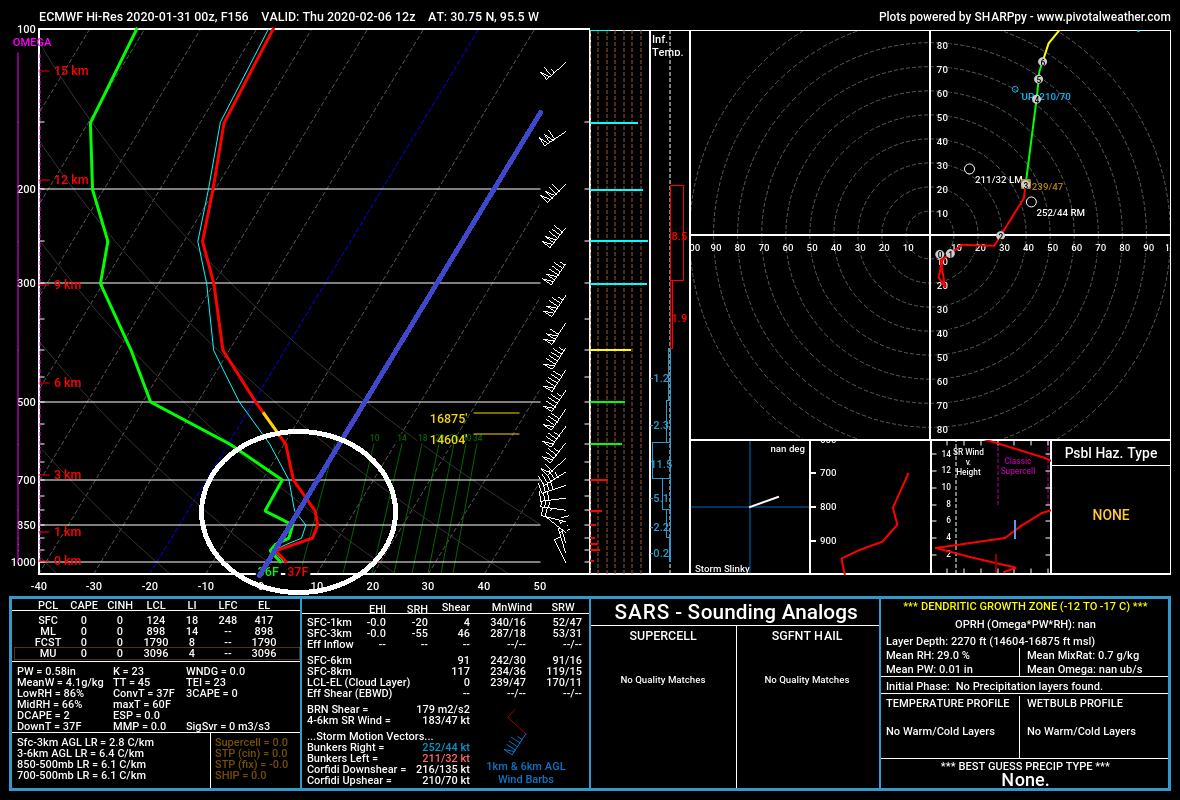 An atmospheric sounding from the Euro model for next week shows mostly unfavorable conditions for snow or sleet in Huntsville early Thursday morning. (Pivotal Weather)

After Thursday morning, most of the moisture should begin to exit according to this model, so this would be your optimal time to conceivably get snow or sleet. According to the Euro, however, temperatures in the lowest 10,000 feet or so of the atmosphere are mostly to the right of the thick blue line. That means temperatures are above freezing. In the “right” scenario, I could see rain mixing with sleet here, but that would probably be all.

Now, that’s just the European model. The GFS is colder but it also eliminates most of the moisture much faster than the Euro. So even if the GFS is supportive of colder temperatures, there may not be anything available to fall from the sky. So from a forecast standpoint five to six days ahead of this, I would tell you: The best data we have says that it is unlikely that areas north of Houston will see any snow or sleet Wednesday night or Thursday morning. However, there is enough uncertainty and it’s interesting enough of a setup that I would not write off the possibility at all at this point. But I would not be getting my hopes up at this point.

We will have the latest on the midweek front and if any of these slim risks for wintry weather still exist on Monday!

2 thoughts on “Drier, warmer weather for Houston this weekend, but what about next week?”