Houston’s weather has been rather boring for rather a long time now, but that may be about to change. While we still have considerable doubt about the details, it seems likely that after Thanksgiving Day rain chances are going to really shoot up on Friday and Saturday ahead of a cold front that will usher in much cooler and drier weather for next week.

Lows have generally dropped into the low 60s this morning, but winds are beginning to shift from east to the southeast, and this will usher in much warmer and more humid air. Winds could gust as high as 20 mph this afternoon from the south. Despite partly to mostly cloudy skies today, we should see highs reach about 80 degrees in most locations. With the additional moisture in the atmosphere, there will be about a 20 percent chance of light showers. This will continue tonight, when we should not expect much of a cooldown. Some areas near and south of Interstate 10 will not drop below 70 degrees.

Change will come in the form of a modest cool front on Wednesday—it should arrive in much of Houston during the mid-morning hours and reach the coast by noon or a little bit after. This front will end our rain chances, for now, and bring drier air and clearing skies. Expect highs in the upper 70s on Wednesday, with a pleasant night as temperatures drop into the 50s for most locations but the coast. 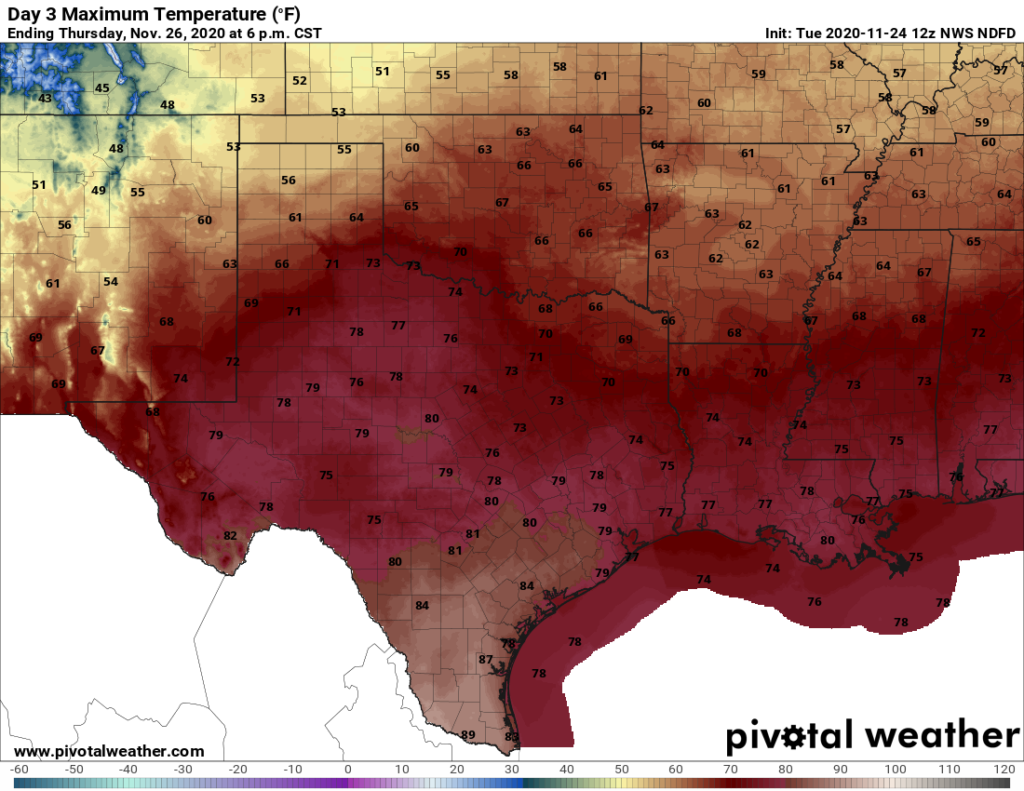 Temperatures on Thanksgiving in Texas will range from the 50s to near 90 degrees in the Valley. (Pivotal Weather)

Turkey Day will start out clear and fairly crisp, but by late morning morning winds should begin to veer back onshore again. As a result, skies will likely be clear in the morning, with building clouds during the afternoon. Highs will reach into the upper 70s to 80 degrees for most, making for a warm Thanksgiving. It looks as though rain chances will hold off until the overnight hours, but after midnight all bets are off.

We have two primary questions heading into the weekend—the timing of a strong cold front, and the amount of rain that will fall before it exits the area. The combination of high levels of Gulf moisture and favorable conditions in the atmosphere will produce healthy rain chances on Friday and Saturday, with mostly cloudy skies. For the most part, these rains should be fairly steady, and not overly intense—i.e. not 1.5 inches per hour or greater that can generate flooding. Still, we expect accumulations of 2 to 4 inches through this weekend, with greater totals possible north and east of Houston. 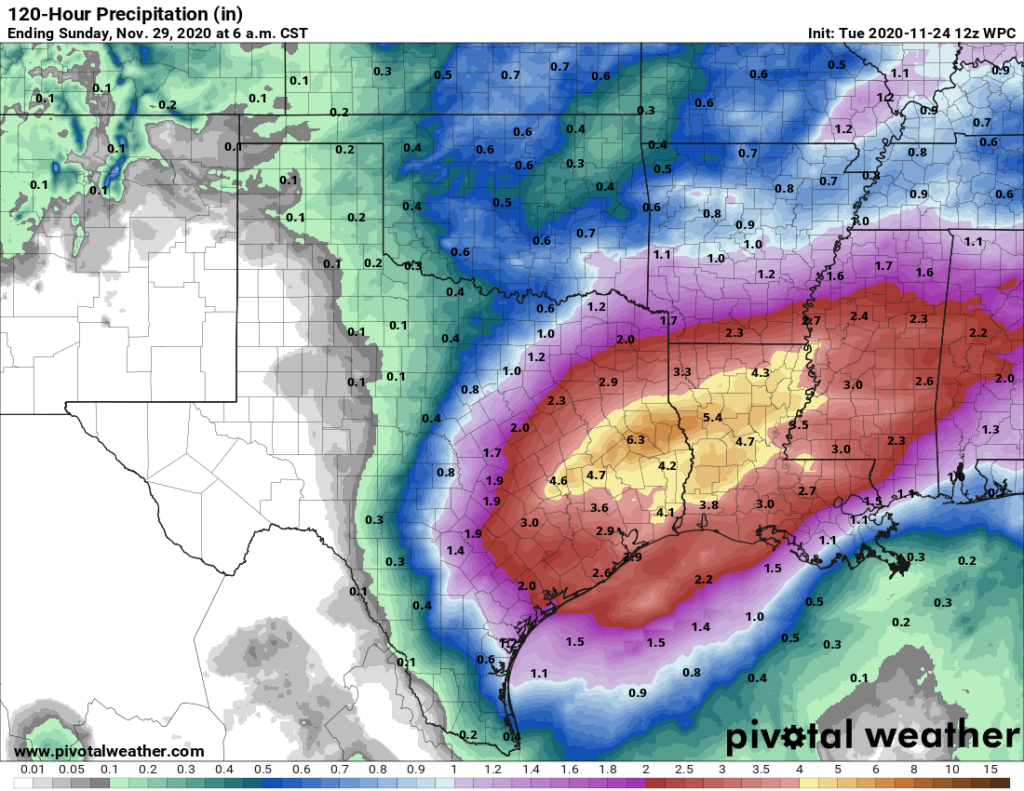 The rains will come to an end after the front passes. I think this could happen any time between Saturday afternoon and Sunday morning. The net effect is that at some point on Sunday we should see clearing skies and much drier air.

This weekend’s front, and likely a reinforcing one, should keep our weather on the colder side next week. Beginning Monday, we should see highs in the 50s and 60s, with lows in the 30s (at inland locations, on some nights) and 40s. I don’t think the metro Houston area will see a freeze during the first week of December, but I would not entirely rule it out. Winter, my friends, is at hand!

Please note there is less than a week left in our annual fundraiser for the site.

5 thoughts on “Dynamic weather ahead after Thanksgiving: Rain showers, then winter”