Good morning. There’s a lot going on with Houston’s forecast over the next week—a veritable feast, one might say—from mild weather on Thanksgiving, to the potential for heavy rain this weekend, to much colder conditions next week. So let’s jump right in!

It’s quite muggy across Houston this morning, but a reasonably strong front is pushing toward the metro area and should move off the coast by around noon. Winds will shift to come from the north behind the front, and this will bring drier air and clearing skies this afternoon. Look for highs to fall somewhere in the mid-70s, with lows tonight dropping into the upper 40s for inland areas to around 60 degrees along the coast. 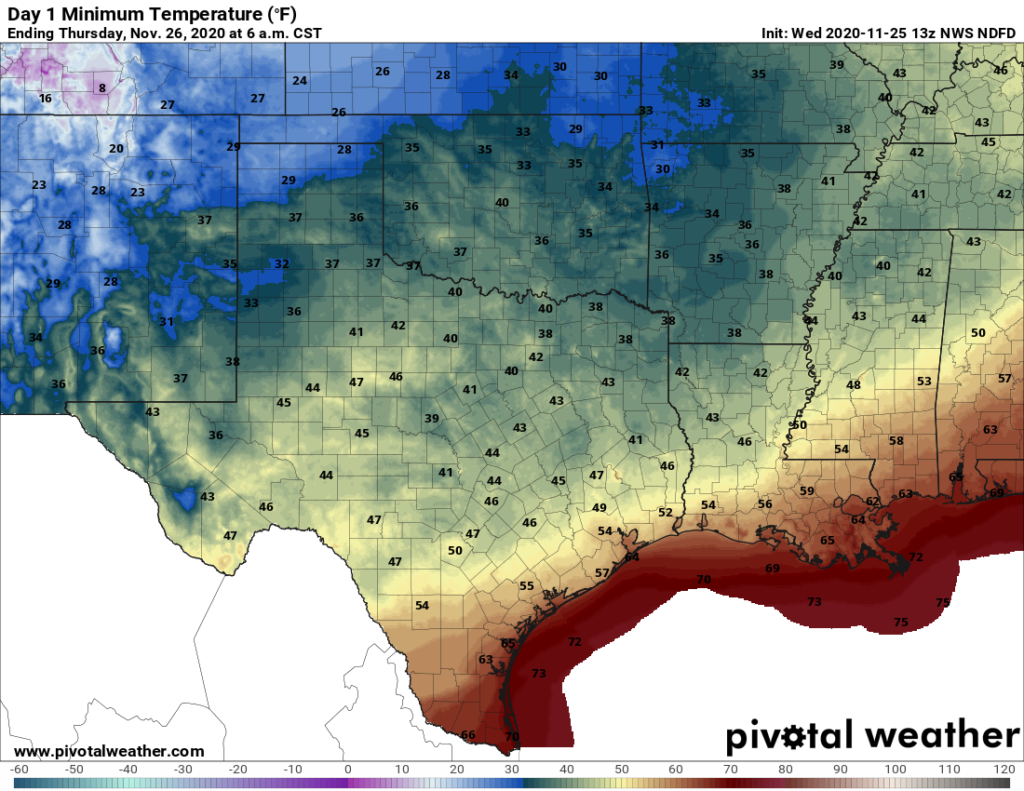 Thanksgiving will start out chilly, but the cool air won’t last. (Pivotal Weather)

Winds will veer to come from the east by Thursday morning, and so while I think we’ll see sunny skies during the morning, clouds will build in the afternoon. Highs likely will reach the mid- to upper-70s for most areas. A few light showers will be possible during the late afternoon or evening, but the better rain chances should wait until after midnight. Low temperatures Thursday night will struggle to fall below 70 degrees.

The combination of ample moisture at the surface, and a favorable upper atmosphere will generate widespread rain showers on Friday, Saturday, and perhaps early Sunday morning. I suspect these will produce periods of on-and-off showers, with some intermittently heavy rainfall. Models are now a little more bullish on rainfall totals, so the expectation is for generally 2 to 5 inches of rain across the area, with some locally higher totals. Given the state of our dry soils, this should not lead to more than street flooding, but as ever we’ll be watching. Frankly, this is much-needed rain so we’re not going to complain too much. Highs on Friday and Saturday will likely reach about 70 degrees. 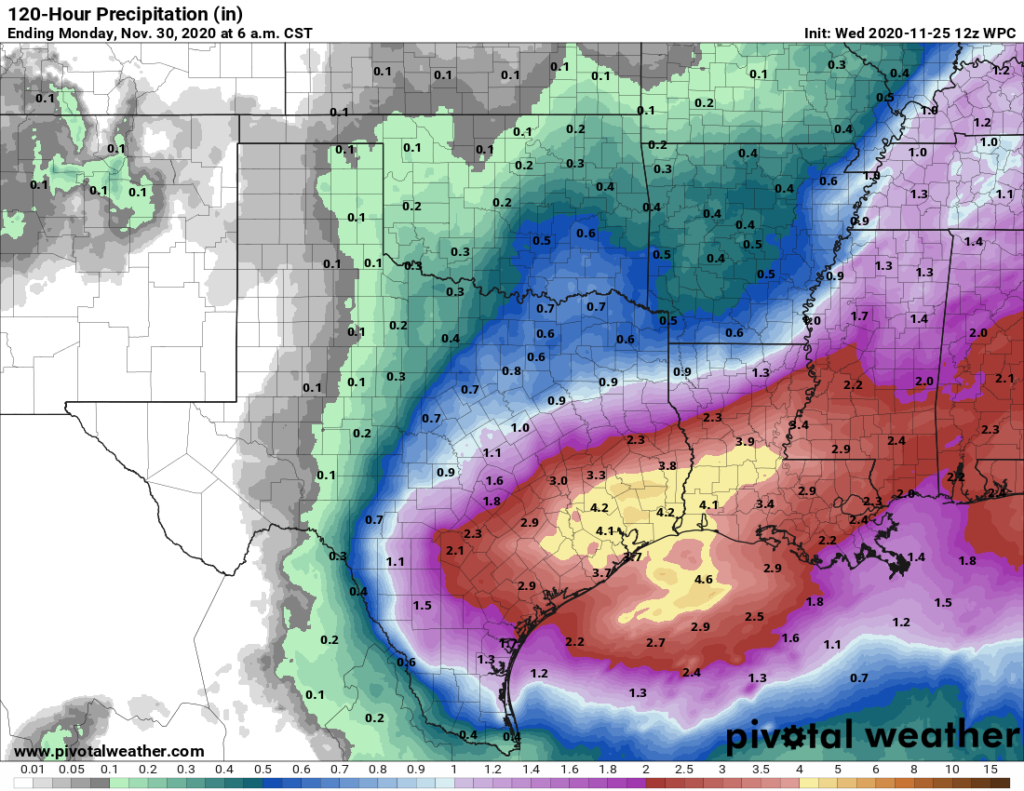 A strong front should push into Houston on Saturday night—precise timing still to be determined—and this influx of much drier air will bring any lingering storms to an end on Sunday morning. Sunday will be a blowy day, with temperatures likely peaking at around 60 degrees and 20 mph winds with stronger gusts making it feel cooler. Lows Sunday night should drop into the 40s for all but the immediate coast. 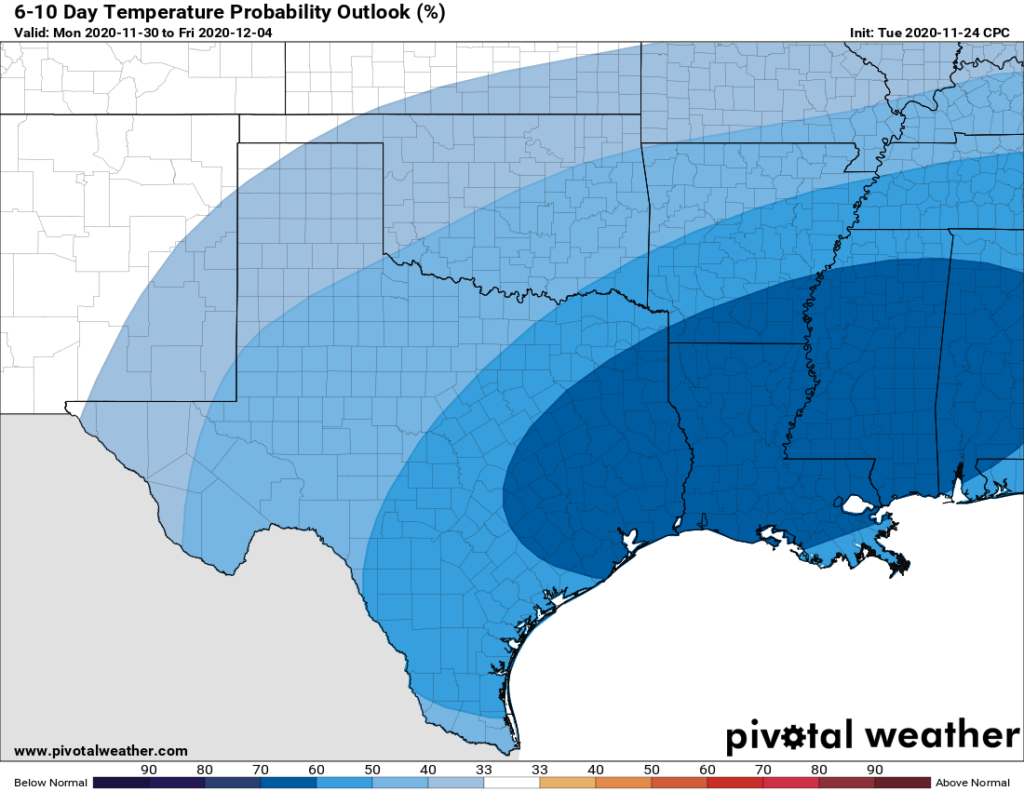 The outlook for next week’s temperatures: Cooler than normal. (Pivotal Weather)

It looks like Monday night will be the coldest of next week, with low temperatures likely dropping into the 30s in parts of Houston—areas north and northwest of Houston, such as Conroe and Brenham, may see a freeze but it’s too early to make that call. As our air will be very dry, I think we can safely rule out any kind of wintry precipitation. Highs will likely remain in the 60s for much of the week, with medium-range models suggesting the cooler weather will stick around for awhile.

We’ll be back on Thanksgiving morning with a brief post to update rainfall expectations for the weekend. Also, we’re entering the final days of our annual fundraiser—your support so far has been amazing.