Tropical Storm Isaias is bearing down on the Mid-Atlantic and Northeast today, and as that storm exits, we actually look to settle down into a period of calm for a bit in the tropics. All good things must come to an end however, and as we go into the back half of August, we will begin to refocus our attention on the entirety of the Atlantic basin. For now, let’s enjoy the respite.

No meaningful tropical activity is expected over the next week, although conditions will likely begin to get more active by August 15th or so.

Isaias experienced a bit of a renaissance last night, ramping up to a moderately strong category 1 hurricane as it made landfall near Ocean Isle Beach, NC.

Since last evening, Isaias has raced northward and been downgraded to a tropical storm. The center is over the Mid-Atlantic this morning, heading toward Upstate New York or western New England by evening. Along its path will be flooding rains, strong winds, and some tornadoes still to come for places including Philadelphia and New York City. 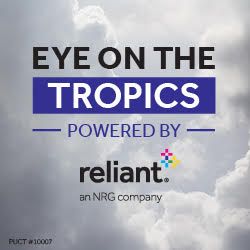 In the Atlantic, we actually have no real disturbances of note behind Isaias. Yes, there is the disturbance dubbed Invest 94L, which is a few hundred miles southwest of Bermuda this morning. That one is unlikely to do much and is certainly not a threat to the U.S. There may be a tropical wave that emerges in the Bay of Campeche this weekend, but that is not expected to develop at this time as it likely moves into Mexico.

Meanwhile, off Africa, we are seeing some waves push across the continent and off the coast that look pretty robust.

None of these are expected to develop, but it’s not entirely out of the question that something could develop. Either way, anything emerging off Africa today would be at least 10 to 14 days away from us here, so we couldn’t tell you anything with any specificity anyway. That said, at least for the next week or so, none of these waves appears to be a serious candidate for any kind of meaningful development.

When do things ramp up?

Right now, the Atlantic basin is underneath what is known as the convectively suppressed phase of an atmospheric Kelvin wave.

The orange shading represents the convectively suppressed phase of an atmospheric Kelvin wave. This wave is bringing an unfavorable environment for developing tropical cyclones from west to east across the tropical Atlantic, likely stunting activity for 1-2 weeks. pic.twitter.com/as1QQ1tBDQ

What? You can read about the science behind Kelvin waves in this PowerPoint presentation from U-C Irvine, or just do a Google search for “atmospheric Kelvin waves” and you’ll find some articles, papers, and more to read up on. Mike Ventrice, whose tweet I copied above also is a very good Twitter follow for occasional insights on these phenomena.

For our simple purposes: When the convectively suppressed phase of a Kelvin wave occurs over the Atlantic, it tends to do exactly what its name says: it suppresses convection, or thunderstorms. That does not mean storms can’t or won’t develop, but it does tend to skew the background state of the Atlantic to a more hostile one for storm development. With that moving through over the next 7 to 10 days, any storm trying to form may encounter some extra headwinds (pun intended).

What happens after? Well, there are some signs in modeling that the convectively active phase of a Kelvin wave may follow for mid to late August. Similar to suppressed phases, active phases do not guarantee activity will occur. But they tend to add a much more hospitable background state for tropical systems to develop within. We are obviously very grounded here at Space City Weather, so I’m not going to get you too worked up about things.

5 thoughts on “Eye on the Tropics: A lull before the peak weeks of hurricane season”