Good morning. Very heavy rains have fallen overnight along a nearly stationary boundary that is anchored across west Houston. As a result, as much as 5 to 7 inches of rainfall have come down near Katy and the Addicks and Barker reservoirs. A flash flood warning is in effect for these areas through 10 a.m. Thursday morning, and you can expect widespread street flooding.

The heavy rainfall over the western part of the region should wane somewhat during the daytime hours. However, the overall pattern facing the region remains more or less the same. Very high atmospheric moisture levels coupled with an unstable atmosphere will continue to support heavy rainfall for the next day or two.

While we think there may be something of a break in storms today, another atmospheric disturbance should move into the area tonight, bringing another healthy chance of widespread showers and thunderstorms. It seems unlikely that any areas will see 7 inches more on Thursday night, but this pattern has already shown what it is capable of. Aside from rain chances today, mostly cloudy skies will limit highs in the mid-80s, with a light south wind.

By Friday the threat of heavy rainfall should be declining—although it is not going to go entirely away. The driver of this will be a slowly drying air mass that should help to set an upper limit on rainfall rates. Nevertheless, we still expect fairly widespread moderate showers and thunderstorms on Friday, with cloudy skies and highs in the mid-80s.

An influx of drier air and dust this weekend should help to constrain rain chances to about 30 or 40 percent this weekend, despite continued instability in the atmosphere. We’re still not quite sure how dust will impact the area, but we’re increasingly confident this is going to be more than just “pretty sunsets.” (Check out what this thick layer of Saharan dust did to sunsets in the Caribbean Sea.) We think the dust could significantly affect air quality issues in a way that previous dust incursions have not. According to Michael Lowry, this is the most significant dust outbreak in at least the last two decades. 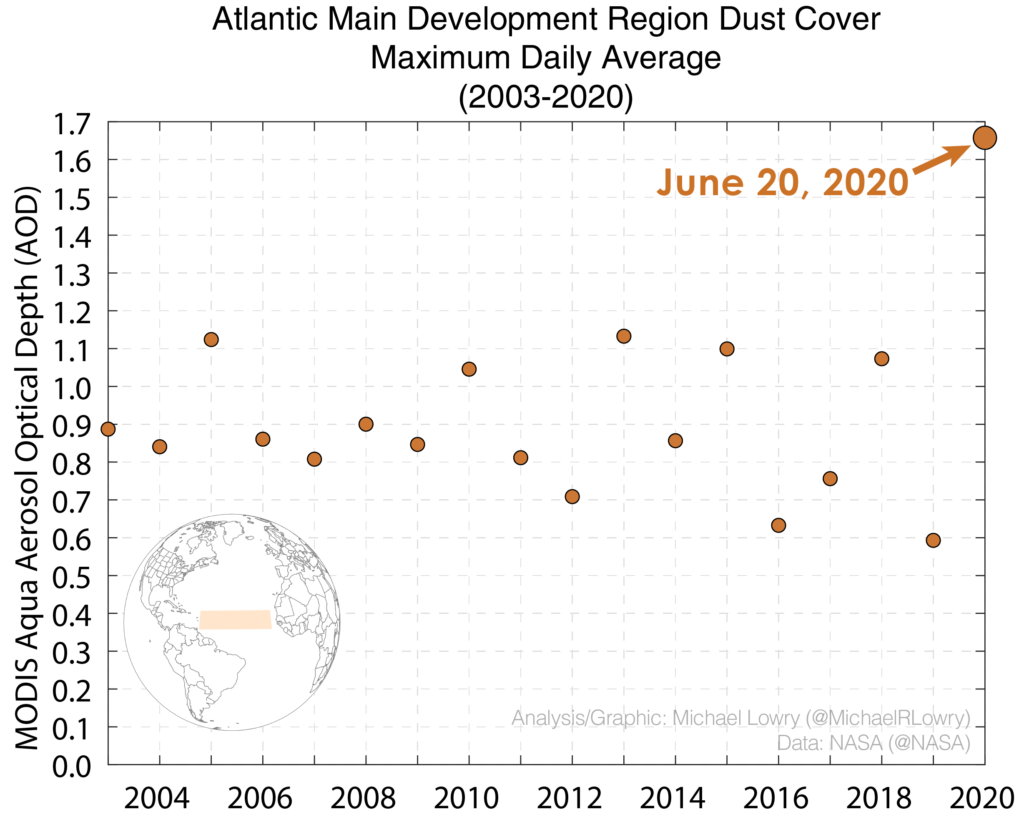 In terms of temperature, we anticipate highs of around 90 degrees on Saturday, with mostly cloudy skies.

We expect similar conditions as Saturday to persist on Sunday, although we could see a little bit of sunshine poke through the clouds. Rain chances will remain in the neighborhood of 30 to 40 percent.

The forecast for next week is far from certain, but at this point we anticipate some sort of high pressure building in. This should help knock rain chances back into the 20 to 30 percent range each day, and push high temperatures up into the low- or mid-90s.