Quick note to lead: A Tornado Watch is posted for the entire area through 1 AM. We’ve just had numerous reports of confirmed tornadoes in northwest Harris County. We’ve had multiple other confirmed tornadoes since last night. While our focus remains on flooding, this tornado threat is a serious concern also. Make sure you have a weather radio or have the emergency notifications setting switched to “on” on your mobile device to get warnings for your location through tonight, as periodic tornadoes will be possible throughout the region.

Working 24×7 to keep you safe during #Harvey. These are just the 67 Tornado Warnings issued since yesterday morning! https://t.co/9Z3PvDi19a pic.twitter.com/0Yf9GTsJ6j

Tropical Storm Harvey continues to explore Victoria and the Golden Crescent of Texas this evening. The center as of 5 PM was near Cuero in DeWitt County. Over the last several hours, Harvey has assumed a bit of an eastward drift. This has been fairly well captured on most weather models, and it’s why I think the most critical part of this storm’s legacy in Houston will play out over the next 18-24 hours. Let me explain.

Since about Wednesday or Thursday, it appeared that Harvey’s closest approach to Houston as a moderate tropical storm would be late tonight into Sunday before it drifted back west and south and further weakened. Though it would continue flinging periods of heavy rain our way, the core would be mostly out of the picture after tomorrow. Some of our shorter-term and highest resolution weather models are suggesting that Harvey’s center drifts a little closer to Houston tonight, bringing some of that core to the western part of the city, while continued onshore flow of moisture helps new rain and storms to form.

This would mean a major uptick in rainfall across much of the Houston area tonight. We’ve been fortunate so far for the most part. Bayous have filled, streets have flooded, but much of it has been manageable by our fairly rigorous rainfall standards here in Houston.

Harvey is slowly creeping closer to Houston, close enough to bring a chance of significant rainfall tonight. Also notice an uptick of thunderstorms in the Houston area. (College of DuPage)

Looking at the radar loop above, you can see a bit of an increase in rain around Houston and a slow drift east of the band on the east side of Harvey’s center. As we go into tonight, we expect heavy rain to redevelop over most of the metro area. On average, based on the latest weather model data, I would expect most of the region to see an additional 3-6″ of rain tonight. But, I expect a pocket or two of 6-12″ with higher amounts possible. 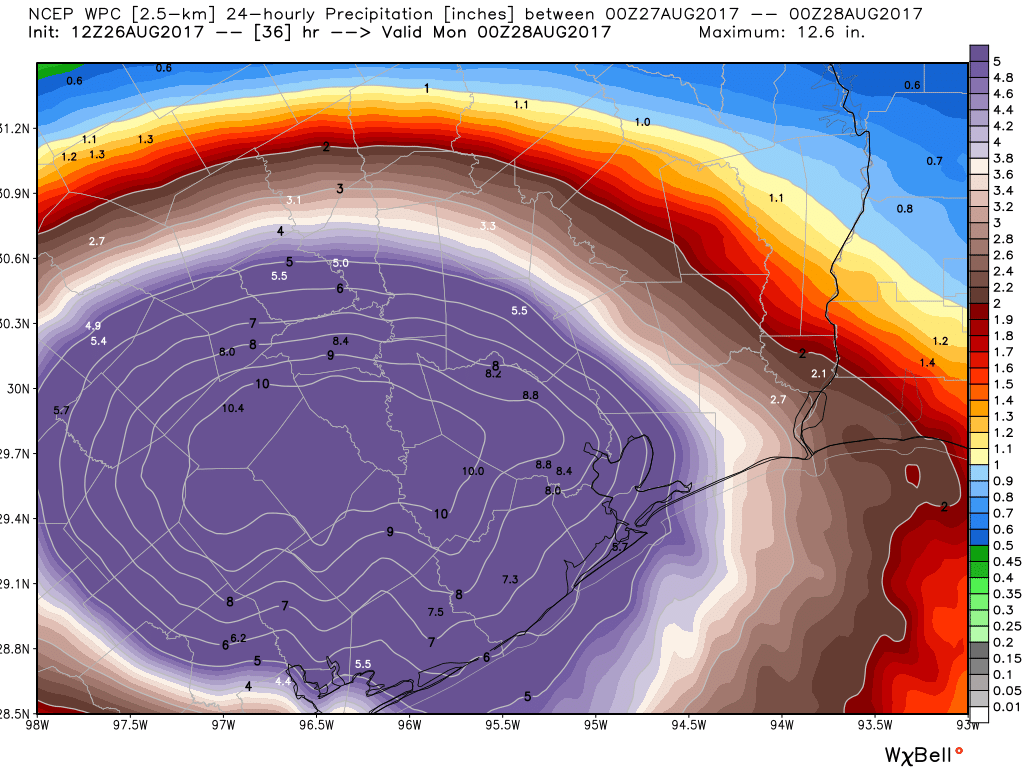 Some questions still: Does Harvey keep drifting east or does it shift back west or south? That could realign the heaviest rain. Alternatively and worse, does Harvey drift a little closer and just stop, leaving the heavy rain in place all night and tomorrow morning? Does the dry air that’s helped keep many areas south and west of Houston quiet today hold longer than models expect? If so, rain totals get cut down. We have a lot to consider, and this is a very fluid (sorry, pun) situation we need to continue observing tonight to really understand how bad (or less bad) it will be.

Here’s the deal: If the rainfall tonight underperforms around Houston, that’s wonderful news. That also helps give us some extra breathing room with the subsequent rains that will hit us next week (no big forecast changes on that this afternoon, just FYI). But if the rainfall tonight achieves its full potential or overshoots that, we are going to have absolutely major problems around the area on Sunday morning. The goalposts are wide. Let’s just keep an eye on things tonight and see how it evolves. We should know more later this evening, and conveniently, Eric should have a post around 10 PM, give or take. Meanwhile, stay safe.

Posted at 5:10 PM Saturday by Matt