I want to preface this post by saying that this is a low-confidence forecast, overall. What we can say with some confidence is that heavy rains are moving toward Houston, and in some cases already moving inland between Freeport and Galveston. This will set the stage for a wet period in Houston from Tuesday evening through Thursday morning. A flash flood watch is in effect, and we are predicting a Stage 2 flood threat for the area. What we are not so confident about are the details—such as where will the heaviest rainfall occur, and will the big bullseyes of rainfall be 6 inches, 10 inches, or more? Let’s take it day by day. 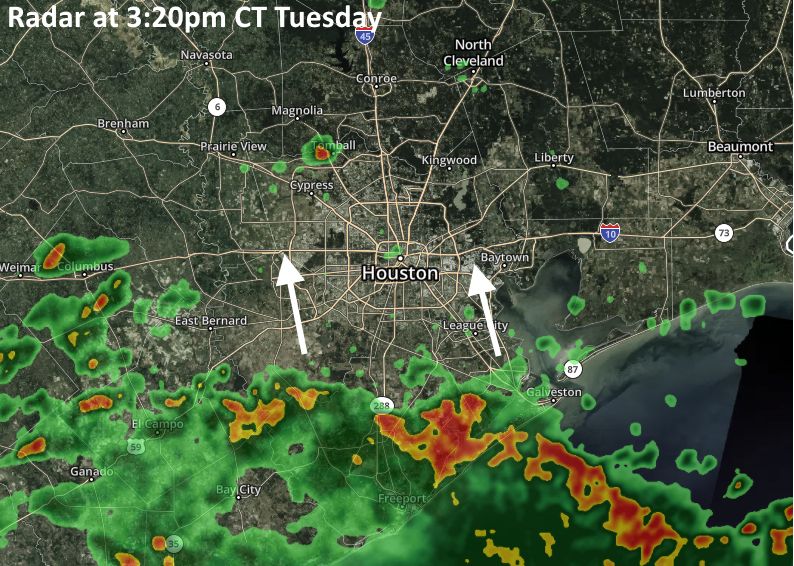 We anticipate that this initial round of showers moving into the coast this evening probably will reach about to Interstate 10 before winding down, probably by or before midnight. After this, models are indicating that a more organized band of storm activity will move into the coast between midnight and sunrise Wednesday. This could occur anywhere between Matagorda Bay and Galveston Island, although at this point I’d probably lean toward the southwest, and Matagorda/Brazoria county area. These storms may very well be efficient rain producers, with rainfall rates of 2-, 3- or more inches per hour, which will quickly back up streets.

It is not clear what happens to this cluster of rain showers, but if it moves into central Houston, it would certainly make for a messy Wednesday morning commute, so we urge you to be weather aware on Wednesday morning before you head out. And as always, please do not drive into high water. It is possible that showers become more scattered during the daytime hours on Wednesday, but this will likely only allow the atmosphere to recharge.

At some point on Wednesday—will it be sunset? later toward midnight? who knows—it seems probable that a mass of storms will develop across much of the Houston area and slowly move from west to east. Again, the big concern with these storms will be rainfall rates which will have the potential to fairly quickly flood streets and rise into structures in low-lying areas. 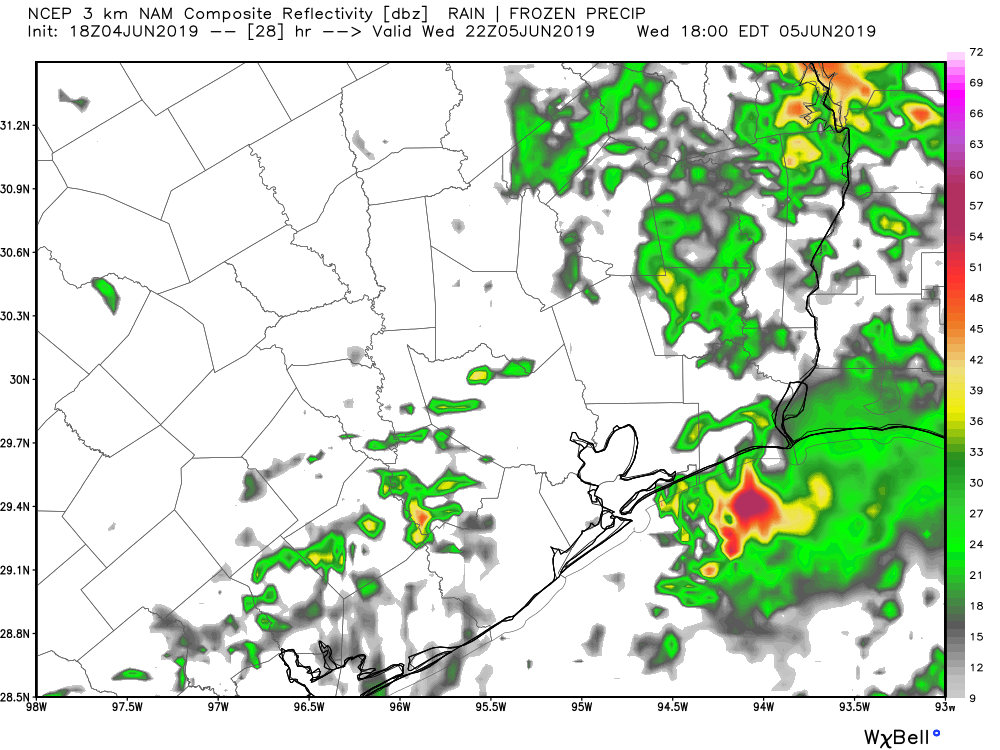 The Houston region will hopefully see something of a break Wednesday afternoon (as depicted in this model forecast for 5pm CT Wednesday) before more late-night storms. (Weather Bell)

In terms of total accumulation for this event, I think we’re going to see widespread accumulations of 2 to 4 inches over the next two days. But the forecast models have been fairly persistent in bringing higher, isolated amounts of up to 10 inches, or more, to some areas. Whether that occurs closer to Matagorda Bay, Galveston Bay, or your home is simply impossible to predict. Hopefully the worst of it remains offshore.

23 thoughts on “Heavy rain is coming to Houston, but the details are messy”