The big weather story for our week will be a slow-moving tropical system pushing into Texas beginning late Monday, and bringing the potential for heavy rainfall from Tuesday through Thursday. It still is not entirely clear where the heaviest rain will come, but there definitely is the potential for some 10-inch bullseyes, or greater. The region most likely to see this rainfall is somewhere between Matagorda Bay and Beaumont. We are more concerned about this event than we were on Sunday, and are forecasting it to be a Stage 2 flood event. 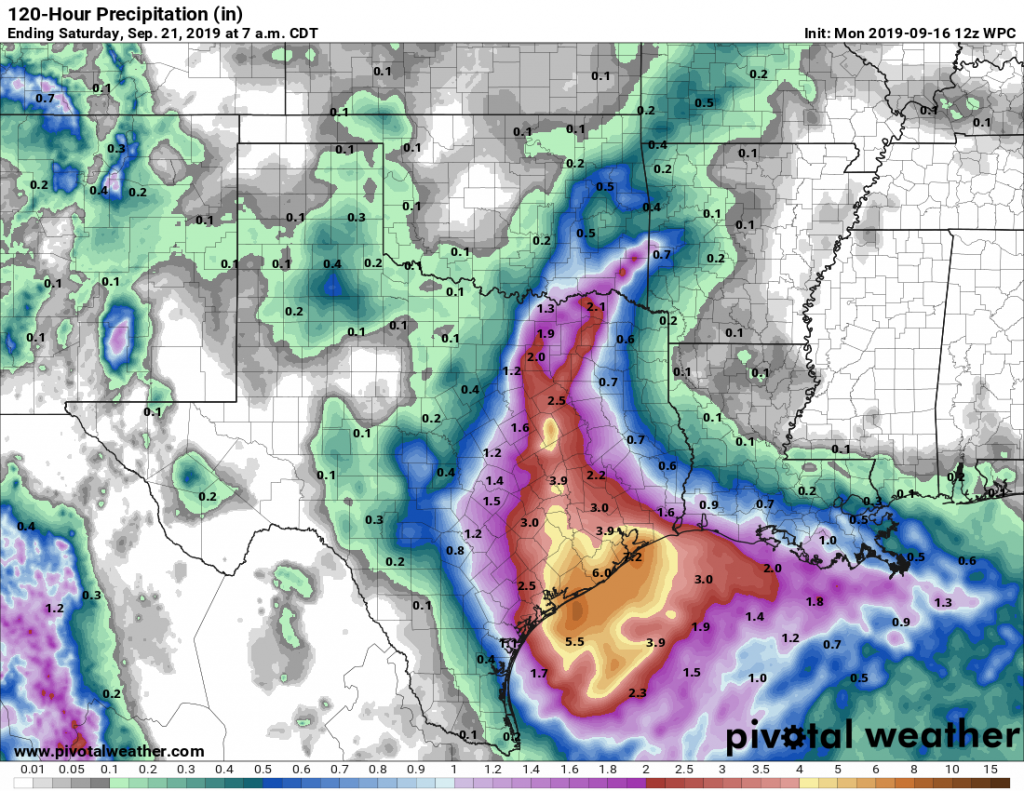 As of Monday morning, here are rainfall predictions from the National Weather Service and NOAA Weather Prediction Center for this system, and we see no issue with these forecasts after looking at the current models:

One problem with forecasting the locations facing the greatest rainfall threat is that this tropical system probably won’t move too much until later this week, as high pressure to the region’s north should allow it to meander for a couple of days.

To be clear, this is most definitely not a Hurricane Harvey type situation—it will not produce anything like Harvey’s totals, nor over such a large area. There also remains a reasonable chance—perhaps 25 percent—that the forecast busts and most of Houston sees 1 to 2 inches of rain this week. However at this time we definitely see the potential for flooding and are classifying this as a Stage 2 flood event on this site’s flood scale. For now, we don’t envision significant home flooding, but these are definitely “turn around don’t drown” conditions, during which isolated underpasses and high-water crossings may become life threatening.

We are forecasting a Stage 2 flood event for Houston this week.

The general pattern we can probably expect is for scattered showers on Monday and likely most of Tuesday. The period of greatest rainfall threat will probably come from Tuesday night through Thursday—with some of the latest models pinpointing Thursday as the day of biggest concern. Days will be mostly cloudy otherwise, with highs of around 90 degrees. Partly sunny skies should return by the weekend.

For those who live along the coast, we also have some high-water concerns as the low pressure system approaches Texas. According to the National Weather Service, through Tuesday morning, low lying areas along the immediate coast may experience minor coastal flooding during high tide times. Additionally, strong rip currents along Gulf facing beaches, and minor flooding along flood prone roads such as Highway 87 near High Island and Blue Water Highway may be possible.

We will update accordingly throughout the week.