Starting close to home and working outward this afternoon: Heavy rain to the tune of 6-10″ or more along the immediate coast has caused flooding from Freeport through Galveston to High Island. As of early afternoon, High Island had seen over 11 inches of rain, Jamaica Beach had seen north of ten inches, and Galveston was nearing seven inches so far. This has created waterlogged scenes in Galveston today.

UPDATE: Here’s another look at downtown Galveston – streets around here are flooded, and with the rain not letting up anytime soon it’s only getting higher. Still only knee high at least on me – I’m 5’3. #khou11 #Htownrush #Galveston #houwx pic.twitter.com/cvWY1WaBUP

Business owner working to unclog his drain. Says he’s trying to save the storefront. pic.twitter.com/3RAUOKzfLG

MEGA TRAFFIC JAM trying to get off the island. Heads up to anyone who needs to leave #Galveston right now. I literally **got out** our our #abc13 SUV, walked along side it, to shoot this video… #snailspace #labordayflood pic.twitter.com/f2K7Q3dmTp

So what’s to come?

Radar as of 1:30 PM today shows heavy rain gradually diminishing in intensity along the coast and inland.

The heaviest rains from this morning have subsided. Periods of rain and a few isolated downpours will continue into the middle and late afternoon. (College of DuPage)

Expect rain to generally wind down here, though some isolated heavier downpours or thunderstorms will be possible into late afternoon. But those would be the exception rather than the rule. Continued residual street flooding is likely to continue in Galveston and generally along the coast.

Another round of rain is possible, especially south and east of Houston, so the flooding threat, while perhaps not as great as today, will not quite trend to zero. There’s still a bit of uncertainty in how much rain falls and exactly where, but in general, another inch or two seems possible along the coast, with lesser amounts inland from tonight through tomorrow afternoon. 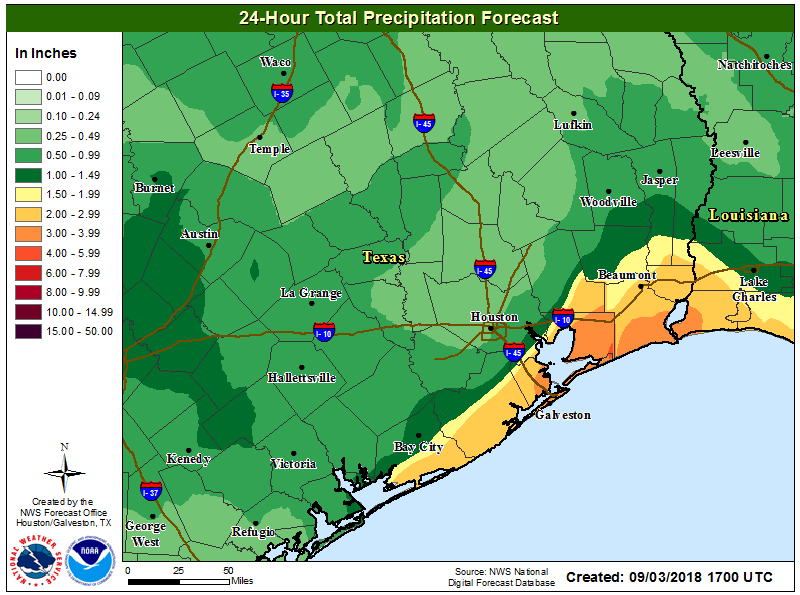 Over the next 24 hours, an additional few inches of rain will be possible along the coast, with lesser amounts inland. (NWS Houston)

Things do look to quiet down around here for the middle of the week, though rain chances don’t quite get to zero. More on that tomorrow.

The National Hurricane Center upgraded the potential tropical cyclone to Tropical Storm Gordon this morning. And we may be seeing Gordon show us it wants to become a hurricane before long.

Check out the radar loop this afternoon from off Florida between about 11:25 and 12:25 PM CT.

Gordon quickly began to organize once it emerged off Florida into the Gulf this afternoon. (RadarScope)

Gordon quickly went from a formidable looking tropical storm to a very ominous one in the course of an hour. You don’t see this very often, at least not this well with the technology we have available to us today. Anyway, look for forecasts for Gordon’s intensity to likely trend stronger as we go through today. Right now, Gordon is presumed to have 50mph maximum sustained winds. The intensity will fluctuate over the next couple days, and again, it’s possible Gordon attains hurricane status at some point.

As of this afternoon, Hurricane Watches are posted from just northeast of New Orleans to the Alabama/Florida line. The forecast track of Gordon hasn’t changed much, and it is still anticipated to track into Louisiana or Mississippi tomorrow night, likely as a high-end tropical storm or (given recent trends) a hurricane. 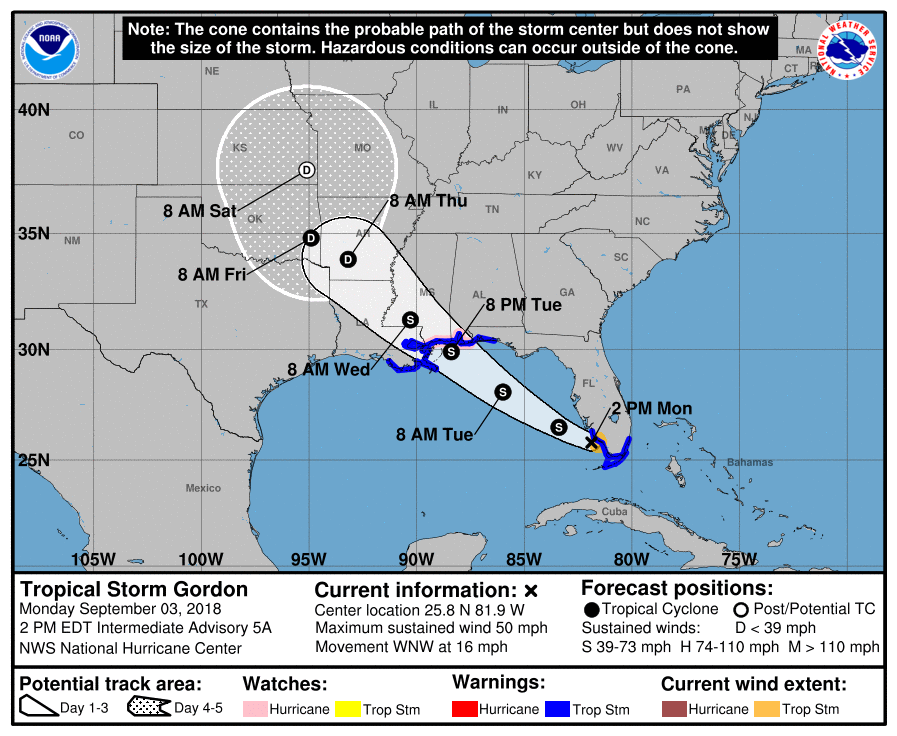 The 2 PM ET advisory for Gordon has it tracking toward the central Gulf Coast tomorrow as a strong tropical storm. Look for some changes in intensity possibly with this evening’s advisories. (National Hurricane Center)

The latest advisory on Gordon will be released around 4 PM CT, so we’ll get an update then. You can check the National Hurricane Center website for the latest.

As Eric laid out this morning, risks in the Houston area are minimal. We do not expect direct impacts from Gordon here as of now, except for perhaps a little bit of an increase in rain chances late this week. There’s been little no change in expectations since this morning for us. If you have friends or family from New Orleans to Pensacola, it would be wise to encourage them to take Gordon seriously. Impacts there will begin tomorrow and should wind down later Wednesday. We’ll continue to watch and have more in the morning.

20 thoughts on “Heavy rains wind down, Gordon intensifies in the Gulf”