Houston will experience warm daytime conditions this week, especially through Wednesday as highs push up into the low- or even mid-90s, under sunny skies and the influence of high pressure and slightly drier air. The upside of this is that nights to start the week should see lows dip into the upper 60s for everywhere but the coast. Rain chances probably will not return until Friday at the earliest.

After starting out just below 70 degrees, highs today should climb into the low 90s for most of the region with very light, westerly winds. Skies will be sunny so we’re pretty much guaranteed a spectacular sunset for the metro area. Low temperatures on Monday night should be similar to Sunday night—which is to say quite pleasant for this time of year with the drier air allowing for a more rapid drop as the sun dips below the horizon. 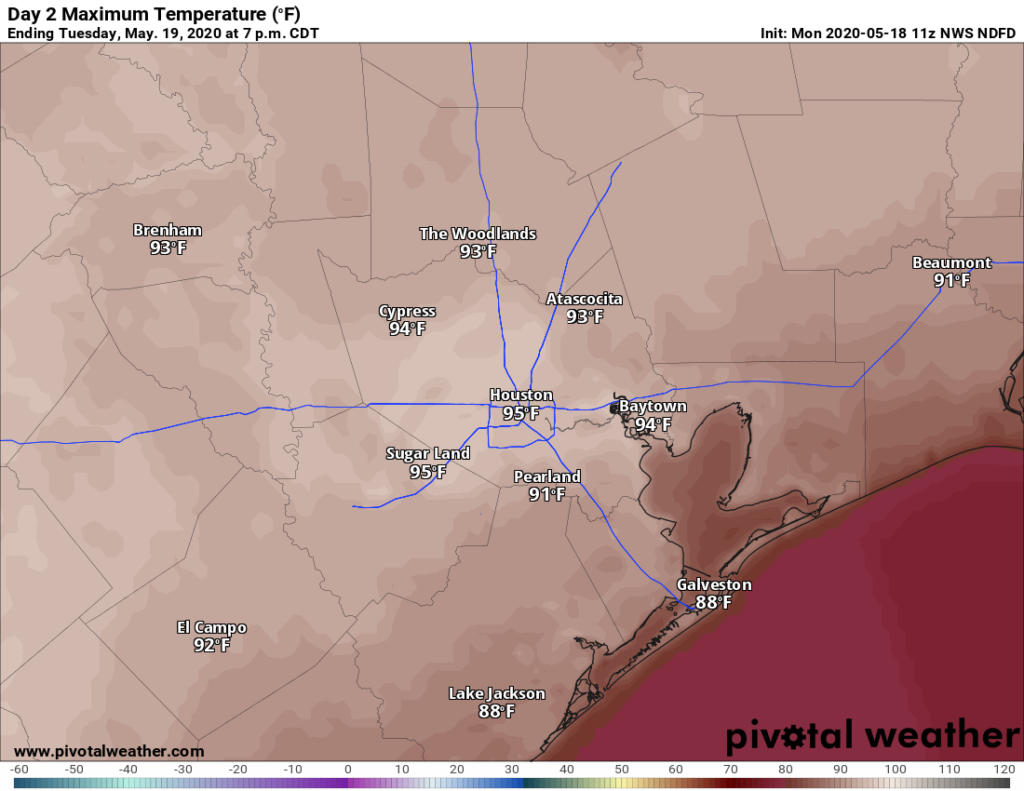 Tuesday’s high temperatures should be the warmest so far of this year. (Pivotal Weather)

This probably will be the warmest day of the week with a warm southwesterly flow and just enough dry air left for temperatures to really pop during the afternoon hours. Expect highs in the mid-90s for much of the city, almost certainly the warmest weather we’ve seen in 2020. Houston’s record high for May 19 is 95 degrees, which is definitely in reach. Make sure to take precautions when outside for extended periods of time.

A front should approach Houston on Wednesday, but it’s expected to stall well north of our area, keeping any showers away from the region. As a result we probably will see partly to mostly sunny skies, and warm weather with highs in the low- to mid-90s on both Wednesday and Thursday. A southerly flow should start to bring humidity levels back to normal, summer-time levels for Houston, so expect nighttime temperatures to fall only into the low- to mid-70s.

This should be another partly sunny day, but we may see a gradual return of some clouds and possibly scattered showers. Highs will likely reach the low 90s.

Savor those lows in the 60s, because soon they’ll be gone, gone gone. (Weather Bell)

Our forecast for this weekend could either way. The global models are not sure how to handle the potential influx of some moisture from the Gulf of Mexico. The GFS model remains pretty dry, whereas the European model brings a couple of inches of rain to the region from later Saturday into early next week. As a result, for now, we’ll split the difference and go with partly to mostly cloudy skies, highs in low 90s, and a 40 percent chance of showers and thunderstorms. One thing we’re confident about? Humidity. It will be here, rain or shine.

6 thoughts on “Hello 90s! Houston will reach near record highs this week”