An upper-level low pressure system is producing heavy rains down the Texas coast, from Corpus Christi to Brownsville, this morning. But Houston is beginning to feel the effects of high pressure, and will continue to do so for the next couple of days. We’ll eventually be cooler, too.

The net effect of the high pressure for Houston will be a return to warmer weather for a couple of days. We can’t rule out a few isolated, briefly heavy showers during the afternoon hours, but for the most part we’re going to see partly to mostly sunny skies, and a likely return of temperatures into the mid-90s. It’s what August is supposed to feel like!

By Friday a weak front will backdoor into the region from the northeast. It’s not going to bring brisk winds or much cooler air, alas. 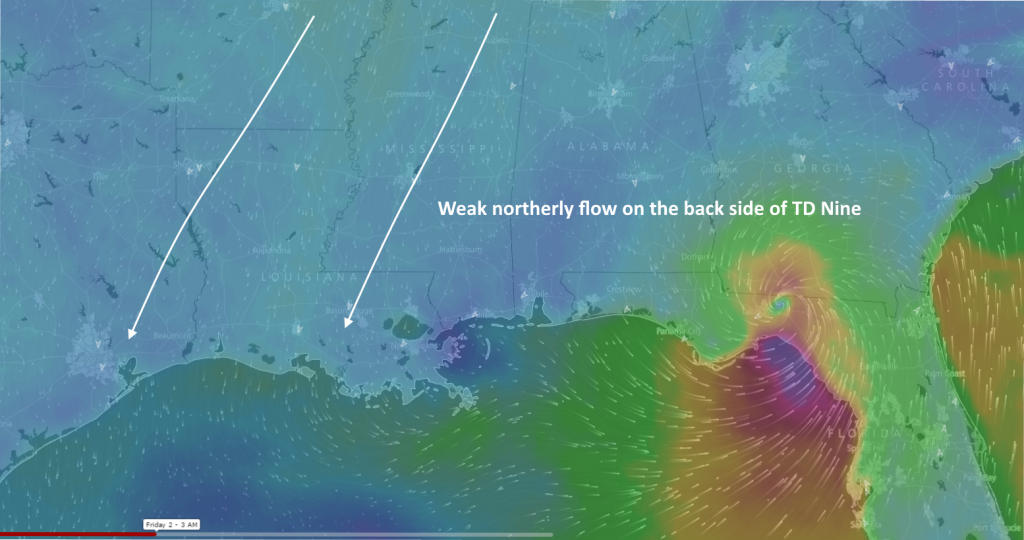 The front should induce some lift at the surface, and could bring some slightly better rain chances by Friday afternoon or evening, but I’m not expecting significant accumulations.

With partly sunny skies likely on Friday and (and especially) Saturday, thanks to the front we should still only see high temperatures of around 90 degrees. Overnight lows will be in the mid-70s. It’s not a true fall front, but it won’t feel terrible either. The evenings will feel pretty decent so plan accordingly.

At some point on Sunday or Monday we should see a resumption of winds off the Gulf of Mexico, which will act to increase moisture levels. This should bring some more clouds and (especially by Labor Day) act to increase rain chances. Again, this isn’t looking like any kind of washout, but I’d expect some clouds and scattered showers. As a result highs should remain around 90 degrees.

When is the first real cold front coming? There are no guarantees, of course. However the GFS model has been flirting with something coming through around Sept. 12 or 13, which would be just a touch earlier than normal. I checked the European model ensembles this morning and about one-third of them bring some decently colder air (i.e. nights in the 60s) into much of Texas, including the Houston area in the same time frame. For now I’d rate the chances of a cold front before Sept. 14 at less than 50 percent, but definitely above zero. I’ll be watching for it, trust me.

The tropics remain very active with Hurricane Gaston and two tropical depressions, including Nine, which is a wind and storm surge threat to Florida beginning on Thursday.