Despite a tropical air mass, rain showers have been really hit or miss across the Houston region over the last four days. Some areas, like The Woodlands, have picked up 3 or more inches of rain. Other parts of south and central Harris County have received no rain at all. Pretty much everyone has seen a lot of gray skies, but that will now change as tropical moisture from former Hurricane Barry moves away, and high pressure moves into Houston.

Bit of a tricky forecast for today, as atmospheric moisture levels remain elevated, and high pressure really hasn’t begun to assume control of our weather just yet. However, there are no significant forcings for rainfall today, so we’re probably looking at scattered showers and thunderstorms today—not the kind of slow-moving clumps of storms we saw on Monday in areas like southern Montgomery County. A few areas may pick up a half inch of rain, or so, but most of Houston will probably remain dry. Skies otherwise should be partly sunny, with highs in the low 90s. 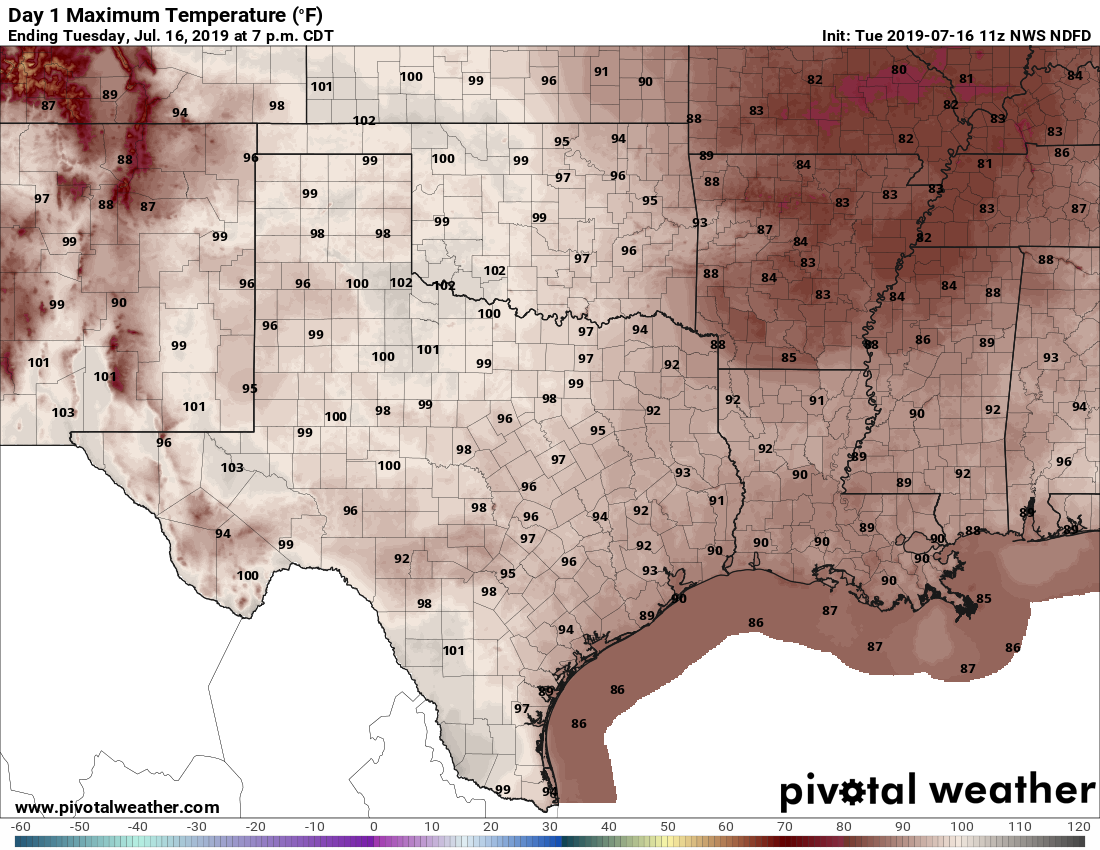 We will probably see a lot of 100-degree readings across Tuesday on Tuesday. (Pivotal Weather)

As high pressure builds over the area, we should start to see mostly sunny days, with rain chances only in the 10 to 20 percent range (mostly during the afternoon, along the sea breeze). These will be prototypical July days for Houston, with lots of sunshine, and highs in the low- to mid-90s. Nighttime temperatures in the upper 70s won’t offer much relief and the humidity will add to the sultry mix.

Not much of a change, but perhaps rain chances move from 10 to 20 percent upward to 20 to 30 percent. Still expect mostly sunny skies with highs in the low- to mid-90s.

As high pressure weakens some heading into the weekend, we will probably see some slightly better rain chances. Please don’t cancel your outdoor plans, as there are no indications yet of anything like heavy or prolonged rainfall. Just some slow-burn chances in the vicinity of 30 percent each day. Skies should otherwise be partly to mostly sunny, with highs in the low- to mid-90s.

The signal isn’t too strong yet, but after a mostly dry week this week, we may see some slightly better rain chances return to the forecast by Tuesday or Wednesday of next week as the influence of high pressure slackens off. We’ll see.