Good morning. With the warmer overnight conditions, some fog has developed over the area, particularly across the western metro area in places such as Tomball and Katy. Aside from that, our weather will be pretty mellow until Thursday, after which a succession of cold fronts bring winter-like conditions to the region by early next week.

Today will be warm as Houston falls under the influence of Gulf of Mexico air, with highs reaching up to about 80 degrees despite mostly cloudy skies. Forecast models are hinting at some very slight, very scattered rain showers today, but for the most part we’ll just see clouds. Low temperatures on Tuesday night should fall into the low- to mid-60s as winds become more easterly. 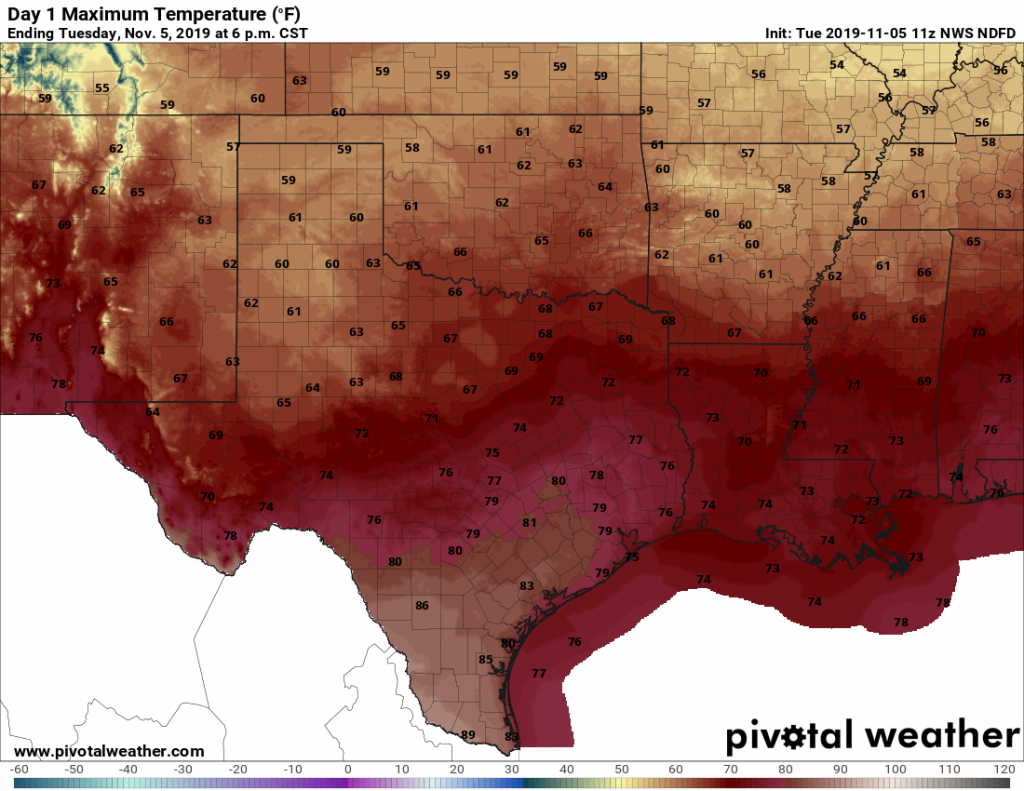 Highs Tuesday will be fairly warm, especially to the southwest of Houston. (Pivotal Weather)

We’ll see partly sunny skies on Wednesday, with highs in the mid- to upper-70s. Rain chances are near zero.

We’re still not entirely sure what Thursday is going to look like, but most of the day ahead of a cold front should be fairly warm, especially for central and southern parts of the metro area. High temperatures will likely push up to around 80 degrees despite mostly cloudy skies. Moderate rainfall ahead of, along with, and just after the front will be likely on Thursday during the afternoon, evening in most of Houston, and perhaps continuing after midnight for areas along the coast. Accumulations of 0.5 to 1.0 inch seem likely for most, with a few isolated areas perhaps seeing as much as 2 inches of rain. Temperatures and dewpoints will fall after the frontal passage, which should occur during the late evening for most of the city.

Rains end during the early morning hours, probably, leaving a cloudy day with highs perhaps reaching only 60 degrees. Friday night will be chilly, with lows getting down into the low 40s for most of Houston, with upper 30s possible north and west of the city. 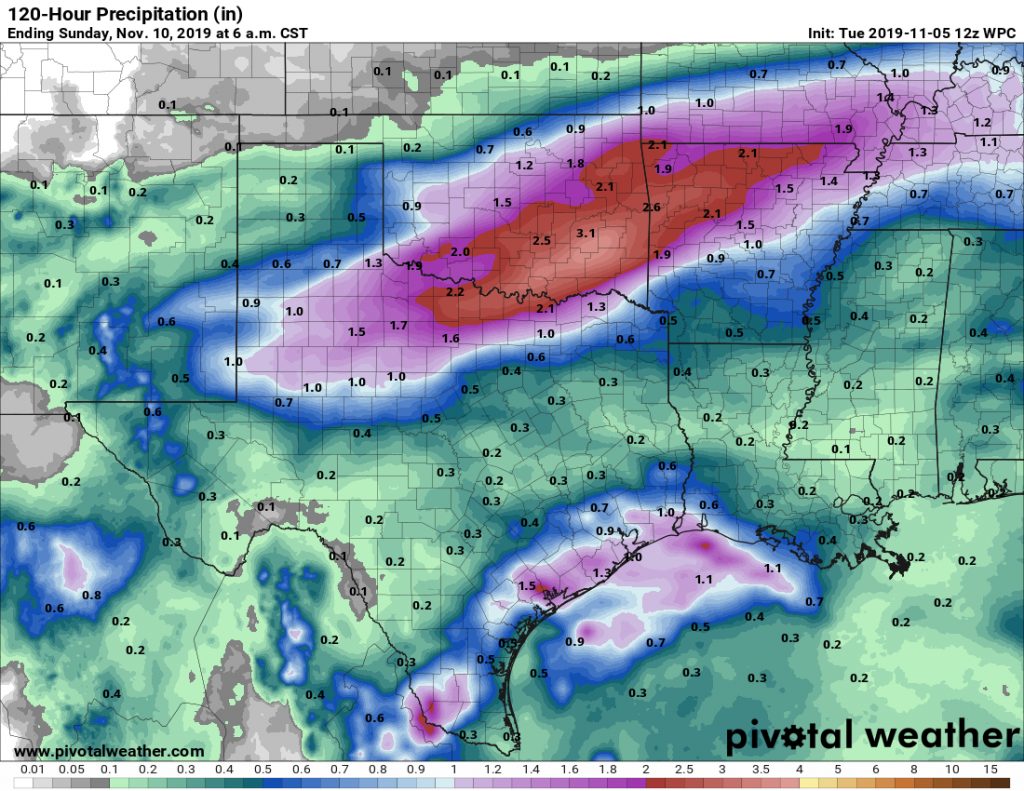 The rain accumulation forecast for now through Saturday. (Pivotal Weather)

Sadly, clouds now appear likely to linger into Saturday, so we should see partly to even mostly cloudy conditions during the daytime. This should limit highs to the low 60s. Overnight lows will be a few degrees warmer.

This day should see a bit more sunshine, with highs rising back up into the upper 60s or so. As the onshore flow returns, we can’t rule out a few isolated rain showers.

Monday and the rest of next week

Another cold front arrives sometime early next week, likely on Monday. An earlier front—meaning less time for moisture to push in from the Gulf of Mexico—will mean lower rain chances. And for now my guess is that this will be a mostly dry front. In any case, low temperatures during the middle of next week appear to be quite cold. I’d still say the chance of a proper freeze in Houston is about 25 percent, but it’s too far out to have any real confidence in precise temperatures.

4 thoughts on “Houston this week: Warm, cool, then cold”