After three days of brutal, winter-like conditions, spring has arrived in Houston for another year. I kid, of course, but it sure is warm out there to start this week.

Lows have only fallen into the mid- to upper-60s across Houston this morning, and some light rain and fog has developed ahead of a weak cool front that’s now moving through the region. This front is likely to stall along, or just off the northern Texas coast. With light northerly winds most areas should see partly to mostly cloudy skies today, with highs of around 70 degrees. Lows tonight will fall down to around 60 degrees.

As the front meanders back inland, Tuesday should see temperatures in the low 70s, along with some scattered, light rain. Fog will be possible in the morning with this moisture before mostly cloudy skies later in the day. The weak front finally gets pulled back east, off the coast, allowing temperatures Tuesday night to fall into the upper 50s for inland areas, and lower 60s along the coast. 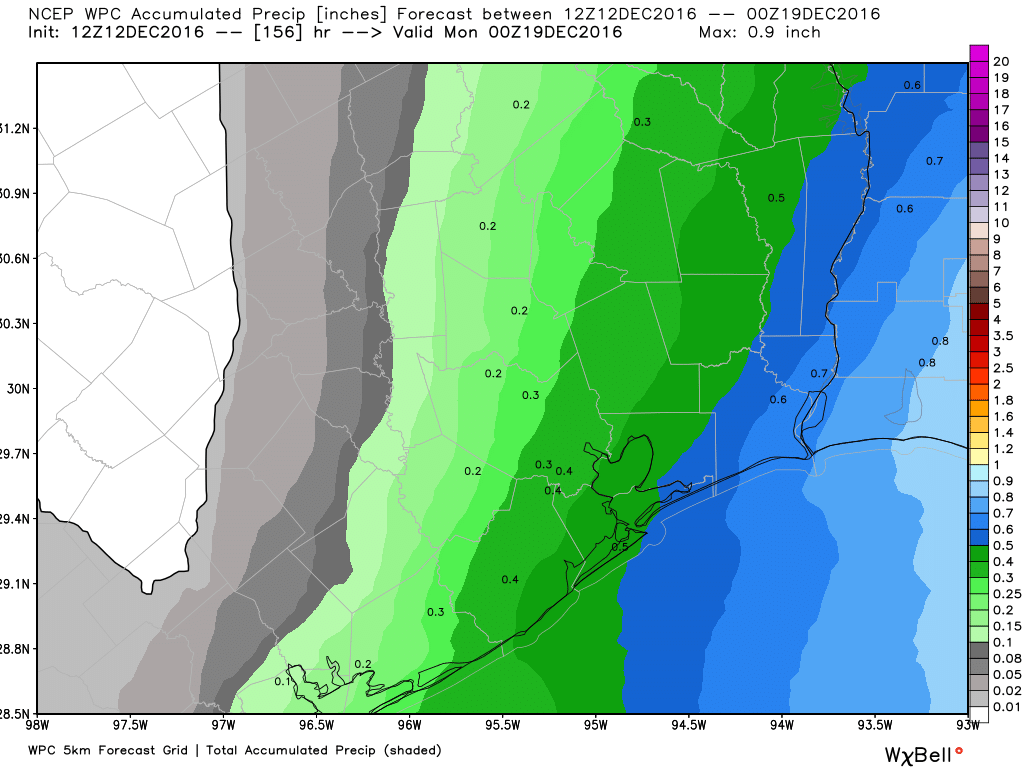 Despite some on-again, off-again light rain this week, forecast accumulations through Sunday are slight. (Weather Bell)

Yet another weak front should move through late on Tuesday or Wednesday morning, and because this one will move all the way through it should finally allow for some clearing skies, and a partly sunny day with temperatures of around 70 degrees. Wednesday night’s low temperatures should fall into the upper 40s north of Houston, and lower 50s closer to the coast.

In the wake of the front Thursday should be mostly sunny, and cooler, with highs of around 60 degrees. Expect another cool night.

We should begin to see the return flow of moisture on Friday, which could make for gusty conditions along the coast. Expect high temperatures on both days to climb into the lower- to middle-70s, with a pretty decent chance of rain as moisture levels increase. Saturday may not be ideal for outdoor activities, but I don’t have a whole lot of confidence in the likelihood of rain at this point.

A stronger, winter-like front should finally arrive sometime later on Saturday or Sunday morning, bringing overnight lows back to around 40 degrees for most of the area. Winter, again.

Posted on Monday at 6:45am CT by Eric

11 thoughts on “Spring, already? Not quite, but this week will be a bit warmer”