Houston has yet to have a 100-degree day this year. Some summers we get lucky, such as in 2014, when the mercury never got that high. Sometimes we get more. For example, during the ridiculously hot summer of 2011 every day but one during the month of August had a high of 100 degrees or higher. The average high temperature that month was a staggering 102 degrees.

This summer won’t be nearly so hot, far from it, but the Houston region has a slight chance to hit 100 degrees today and Friday at its official weather station, Bush Intercontinental Airport, today and Friday before things cool off a bit.

Houston will lie on the edge of high pressure to end the work week, and this will allow for mostly sunny, and hot days. While I won’t rule out a few stray showers, for the most part we’ll be dry, with highs reaching the upper 90s—and possibly 100—for inland areas, and lower to mid-90s closer to the coast. 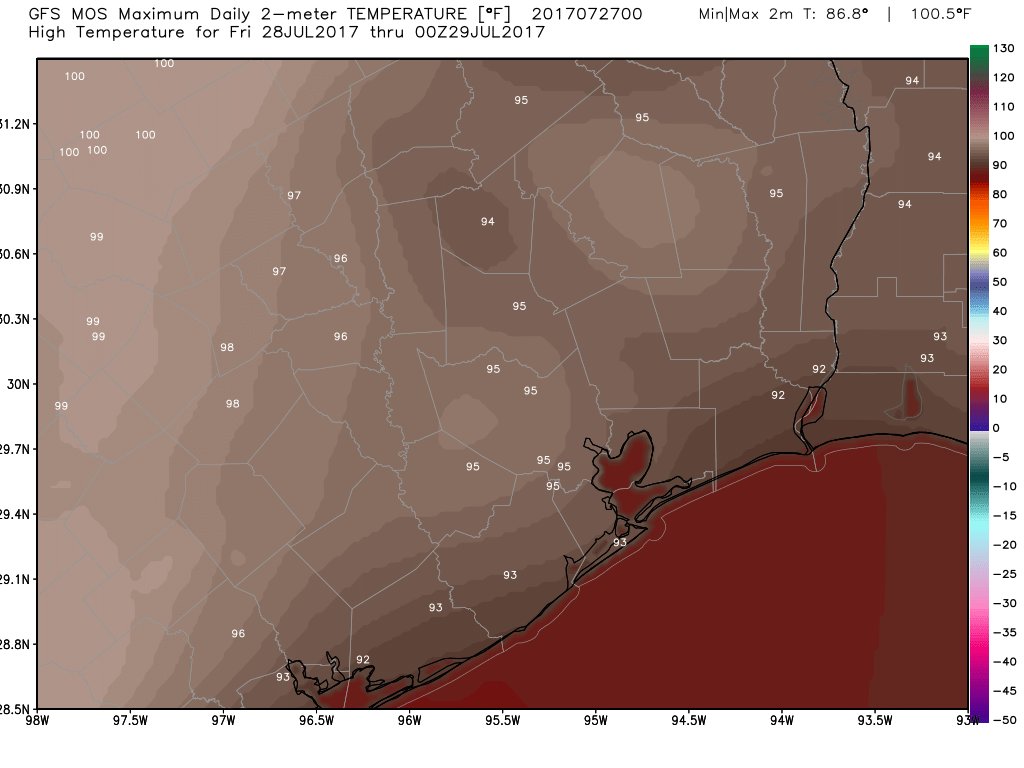 High temperatures are likely over central Texas to end the week. But will they move as far east as Houston? (Weather Bell)

Another warm day, likely in the mid- to upper-90s. What I hesitate to call a “front,” simply because it won’t feel like what most people associate with a front, should approach the region sometime later in the day on Saturday. This will bring a slight chance of rain, but likely won’t have much immediate effect on temperatures.

As the front slowly slogs through the area, it could produce some scattered showers and thunderstorms on Sunday, but I’m not expecting too much in the way of rainfall accumulations. Highs in the low 90s.

The combination of the “front” and lower pressures to the east of Houston, should moderate the region’s temperatures next week, likely keeping them in the low 90s. I don’t think we’re looking at much, if any rainfall to start the week, but the second half of next week, by Thursday or so, could see rain chances increase. In fact by Friday we might see some widespread, heavy rain. One or two inches of rain by then would probably be welcomed by lawns and trees. But that’s eight days away, so, we’ll just have to see.

Posted at 7am CT on Thursday by Eric

4 thoughts on “Very hot to end the week in Houston, surprisingly temperate next week”