Eric and I had a conversation this spring to discuss some new ideas for the site, and ways to help readers navigate hurricane season. We absolutely feel people’s uneasiness every time it rains here, and a general sensitivity to the rumor and speculation that springs to life during hurricane season. So we have decided that every week or two, we will publish a more in-depth outlook for tropical activity in the Atlantic Ocean, Caribbean Sea, and Gulf of Mexico so that you understand what’s happening, and what could happen in the next couple weeks.

Tropical development is unlikely over the next week or so across the Atlantic Basin, but we are eyeing July for a possible increase in activity.

Historically, we would watch the Bay of Campeche and Gulf this time of year for development.

Historically, storms have formed in the Gulf and Bay of Campeche in the final third of June. (NOAA/NHC)

As of now, no tropical activity is expected over the next week, as conditions should remain mostly unfavorable for storms to develop in those areas and elsewhere.

Looking at satellite imagery from Tuesday morning, we have a couple tropical waves moving across the eastern Caribbean and a couple disorganized waves elsewhere.

None of these waves is a candidate for development as of right now, and if anything, they should fizzle out and stay safely away. So: Good news, as we just don’t see much of anything out there.

One of the biggest hurdles to good tropical information during hurricane season in the social media era is a tendency for folks to mention a model solution with zero context or just because it shows something extreme. You’ll see something like, “This model is just one solution but it shows a category 10 hurricane in the Gulf in 15 days! You probably shouldn’t believe it, but here it is anyway.”

Is there anything showing up on the models in days 10-15? Not at this time. The GFS model, which is the most frequent offender with fantasy-land storms is quiet right now. The GFS tends to have a bias early in the hurricane season, and then again later in the hurricane season. The bias is worst in May and early June, where it can often spin up systems in the Caribbean that never materialize. I tried to run the math on it last season, and during the month of May 2018, 79% of the time the GFS showed a storm beyond day 10, it never materialized.

Now, the GFS model was recently upgraded which should hopefully lead to reduced false alarms, but we won’t know much about that in practice until next May. Within the season, it still seems to show more false alarms than not, and Eric and I try to sort through the noise for you. Let this just serve as a reminder to be cautious of extreme modeled solutions posted on social media without much context.

Looking beyond the next 7 days, I do think we will see some changes. This will be a little complex, but I think it is interesting and somewhat predictive. In meteorology, there’s a recurring pattern called the Madden-Julian Oscillation (MJO). You can read more about what it is and how it came to be here. But in a nutshell, it’s looking at thunderstorms, or convection, around the globe in the tropics. Every so often, you get a recurring pattern where an area is more favorable for thunderstorm development than other areas. That’s typically an MJO wave, and it can circle the entire globe over 45 days or so. The MJO isn’t always coherent enough to utilize from a useful forecasting perspective, but every now and then it is coherent, organized, and offers enhanced ability to make longer-term predictions.

I believe that we are in such a period right now.

To explain this, let’s utilize a plot that shows essentially where the best rising air is in the tropics. This is from the GFS model. The top panel is a snapshot of last night. The middle panel is an average forecast through June 25th, and the bottom panel is an average forecast from June 26th through July 2nd. In an active MJO period, this map would be fairly lit up, and that’s what seems to be happening. 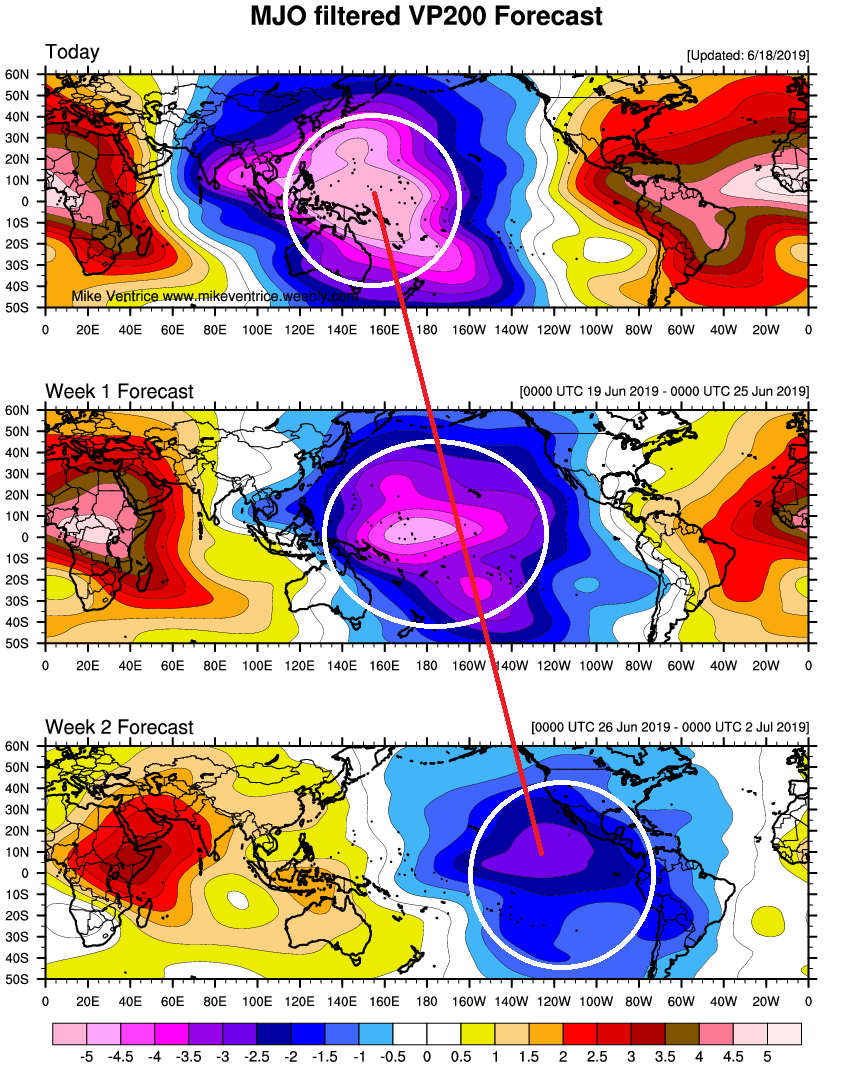 A plot that shows the GFS forecast of the active MJO wave moving across the Pacific over the next 2 weeks. (mikeventrice.weebly.com)

This map above represents a forecast of 200 mb velocity potential. What the heck are you talking about, Matt? In simple terms: The purple/blue color on that map above represents where the atmosphere is most favorable for widespread convection, or thunderstorms in the tropics. As that wave progresses from west to east, tropical development becomes more likely in the Atlantic.

Through early next week, that MJO pulse will move east of Australia and into the Central Pacific. Heading into later next week, that will shift east across the Pacific toward Central America.

There are other factors that can and will play into this. But, if you figure the MJO wave holds together this whole period, tropical activity should begin to become more likely in 10-14 days in the Eastern Pacific, where it has been very quiet this season. After it crosses the eastern Pacific, the MJO pulse would arrive in the Atlantic around the 4th of July or so. That may be the spark needed to get the tropics back up and running, and that’s why I believe we will see a higher chance than usual of activity somewhere in the tropics in early or mid-July. Conditions would probably shift back closer to average later in the month.

1.) There’s no guarantee that all conditions necessary are going to come together to allow tropical systems to develop. Not every MJO passage guarantees storm development; it just boosts the odds a bit.

2.) Even if all the conditions come together right and we get a storm or storms, there are no rules that say one of them will be in the Gulf. A lot more goes into steering these things than an MJO wave, and those are things we won’t see until a week or less in advance. For all we know, we could have two fish storms or something. The forecast concept I’m laying out here would verify, but the impacts could be nil.

3.) It’s also possible that the MJO wave falls apart before becoming a player in the Atlantic. I have seen forecasts fail here, so I would not rule it out completely. But I tend to believe it will hold together.

So, I just want folks to be aware that a lot goes into trying to forecast tropical activity, and these things are difficult. Nevertheless, we look for predictability where we can, and based on my experience and what I have learned, I think we have a period of slightly more active than usual conditions coming in early or mid-July.