On Wednesday in Houston, the fog never seemed to lift. On Thursday the fog eventually went away, but then a persistent drizzle never seemed to stop drizzling. So what gloom does Friday have to offer Houston? Today, we think, it will just be clouds. If you’re wondering when the sunshine will return, you’re going to have to hang on until Monday.

The front that stalled out over Houston on Thursday has finally moved into the Gulf of Mexico, but it’s not going very far, and there wasn’t all that much oomph left in it any way. So while winds have shifted to come from the north and northwest today across Houston, we won’t see too much drying out, and for all but western areas, skies will remain at least mostly cloudy. Highs should reach about 70 degrees for most areas, with the city dropping to 60 degrees tonight, with temperatures in the 50s for outlying areas. At least it probably won’t rain today—not something we can say for the entire weekend.

Some fog will be possible on Saturday morning, but it won’t be like what we saw earlier this week. Skies will still be mostly cloudy, and as winds shift to come from the east moisture levels in the atmosphere will increase. I’m confident the morning will remain rain-free across Houston, but some light showers will be possible later in the day and overnight. Highs Saturday will likely climb into the upper 60s, with lows dropping only perhaps 5 to 10 degrees with little diurnal cooling. 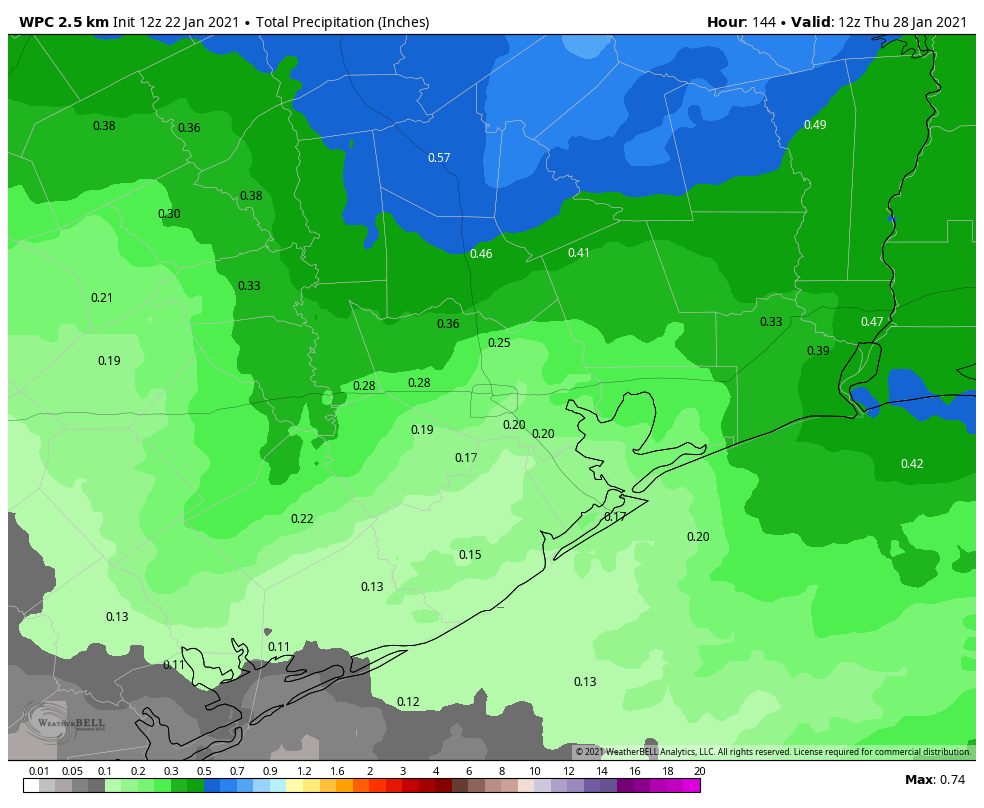 We can probably expect a healthy amount of fog on Sunday morning as warmer air moves over cooler bodies of water. Rain chances will be healthy on Sunday, and the day may be a lot like what we just experienced on Thursday, with widespread light rain not leading to much in the way of accumulations. Highs will likely be in the mid-70s, with a very warm night in the mid-60s. So yeah, it’s a pretty bleh weekend.

Finally, on Monday, a stronger front will work its way into the Houston area. Our best guess on timing, at this point, is mid- to late morning. A broken line of showers, and perhaps a few thunderstorms, may accompany the front. But our atmosphere will dry out quickly with its passage, and skies should turn mostly sunny in its wake. Lows Monday night should fall to around 50 degrees. 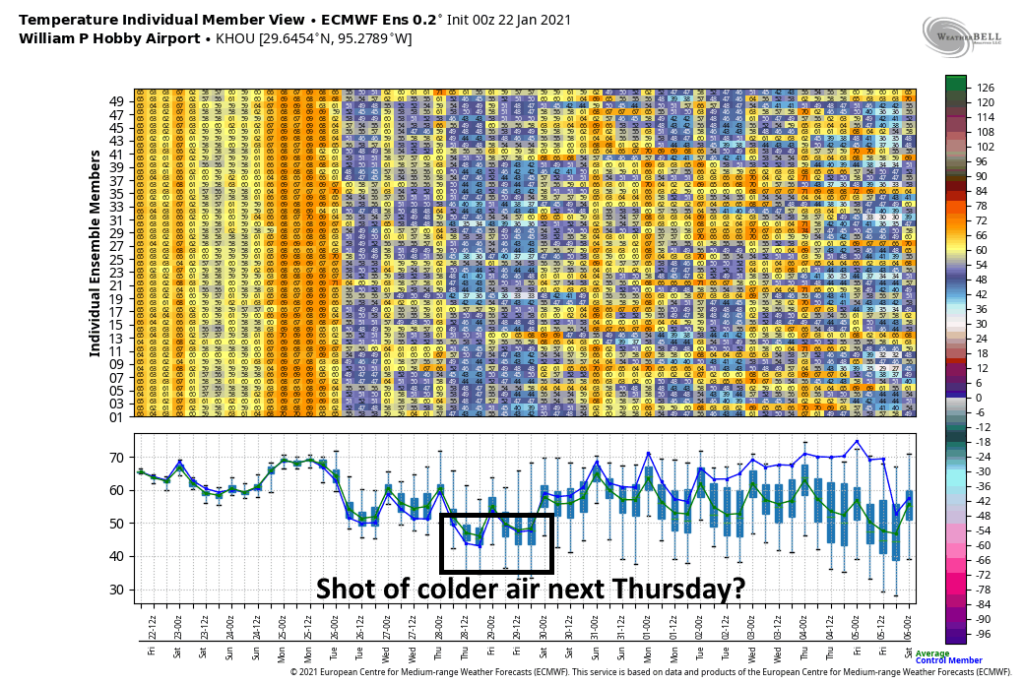 Next week will first turn cool, and then cooler still. (Weather Bell)

The rest of next week

Next week should see a succession of at least partly sunny days. Another front later in the week should knock lows down into the 40s for most of the area. The models aren’t indicating anything too crazy in terms of precipitation, so compared to the week we’re now experiencing, next week looks pretty great.

We’re seeing a misty, foggy morning for much of the area as a warm front moves onshore from the Gulf of Mexico and spreads inland. Overall, we’ll stay in this unsettled pattern of warmer, more humid conditions until a somewhat stronger front arrives on Monday. Fog will remain a possibility, mostly during the mornings, through Sunday.

Even if there were no fog at the surface, the skies above are mostly cloudy, and will remain so throughout the day. With the southerly flow of warmer air, we can expect highs to rise into the low 70s this afternoon. Rain chances will also be on the increase later this afternoon as a weak front approaches. The rain should be light, with most areas recording at most a tenth of an inch, or two, through Friday morning. Lows tonight will only drop into the low 60s. 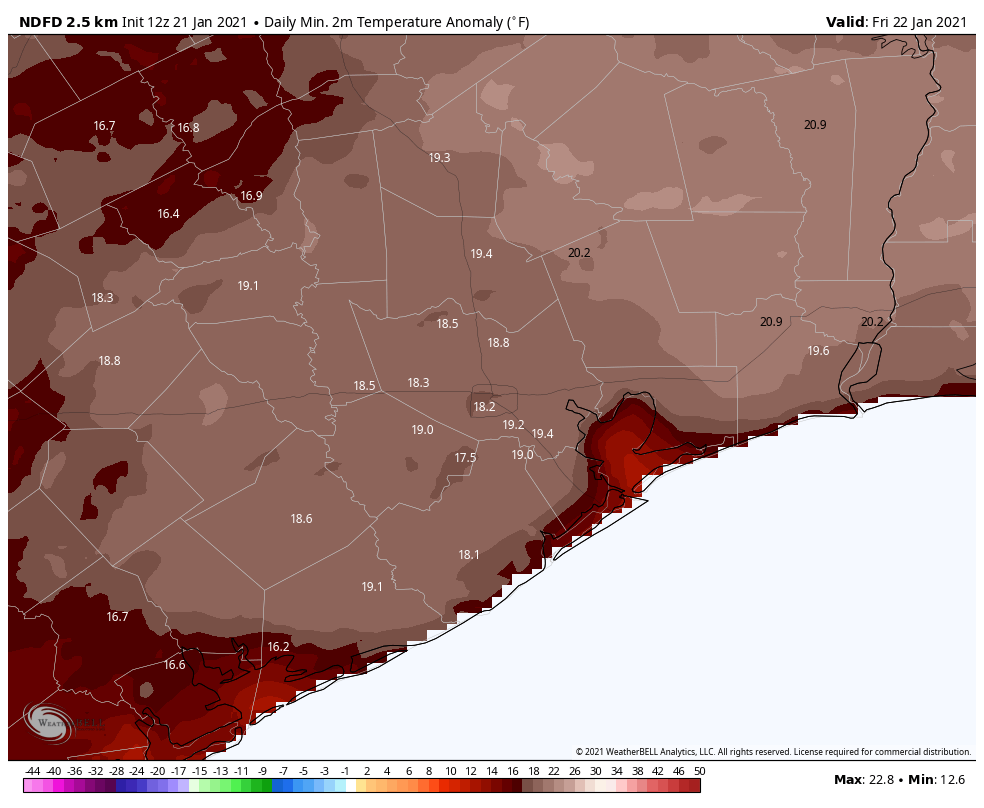 Low temperatures will be nearly 20 degrees above normal on Friday morning. (Weather Bell)

The aforementioned weak front should stall out just offshore, but it should be enough to bring in some slightly drier air on Friday. As a result we might see a bit of sunshine during the middle of the day, but we don’t expect it to last for very long. Highs on Friday will likely reach in the low 70s and it’s possible that lows on Friday night will drop into the upper 50s for parts of Houston. Still, it will be pretty warm for January.

Alas, the story of this weekend will likely be the return of the front from offshore. As it moves back inland, it will make for a warm and mostly cloudy weekend. Highs on Saturday should reach nearly 70 degrees, and Sunday should rise into the mid-70s. Beginning Saturday afternoon or evening, there will be the persistent threat of light rain throughout the remainder of the weekend, but again we expect accumulations to be slight. By Sunday night, low temperatures seem unlikely to fall too far below 70 degrees—about 25 degrees above what is normal for late January. 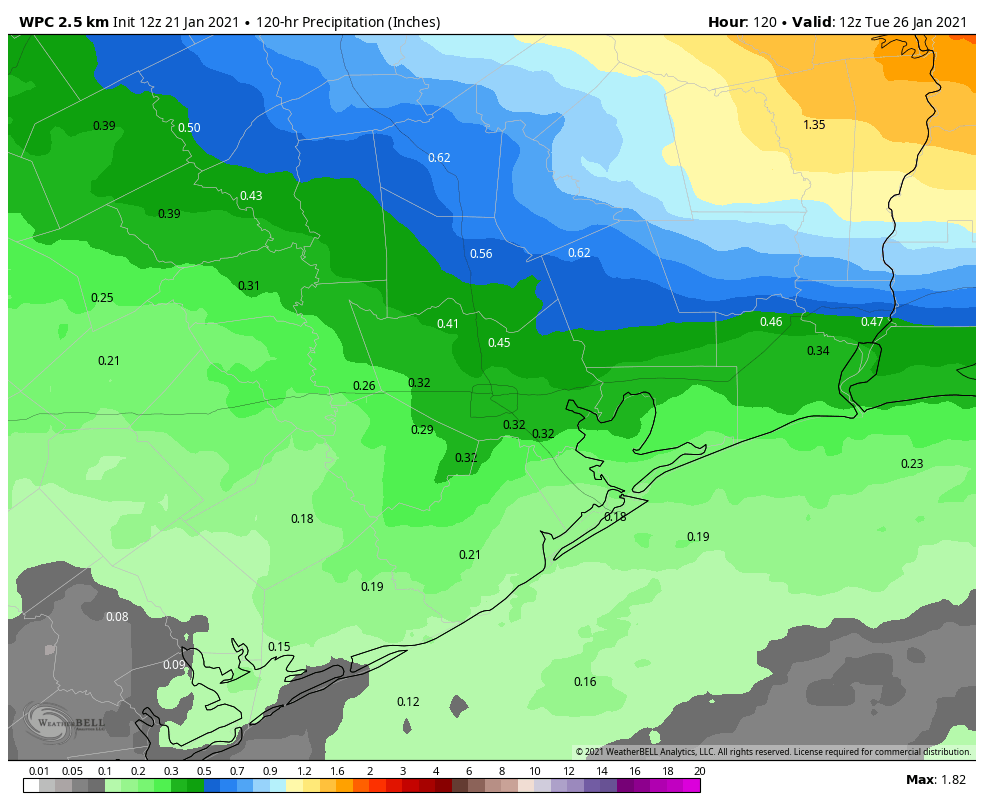 Our region will return to more winterlike weather on Monday, as a decently strong front arrives, perhaps around the middle of the day. Some additional rainfall may accompany this front, but we expect clearing in its aftermath. This may bring us a couple of days of sunshine, but this front, too, may meander back onshore by Wednesday or so. Lows will likely drop into the 50s. A still stronger front may arrive by Thursday or Friday of next week.

When the onshore flow returns in the winter, it can lead to the development of fog like parts of the region are seeing this morning? Why? Because as warmer winds flow across the shallow, colder waters near the shore and in bays, it cools the air to very nearly the dewpoint temperature. This allows water vapor to condense into tiny droplets suspended in the air. Fog typically dissipates as the air temperature rises faster than the dewpoint. Anyway, we’re going to see favorable conditions for fog the next several mornings across much of the region. Already, this morning, there’s a Dense Fog Advisory for coastal areas. 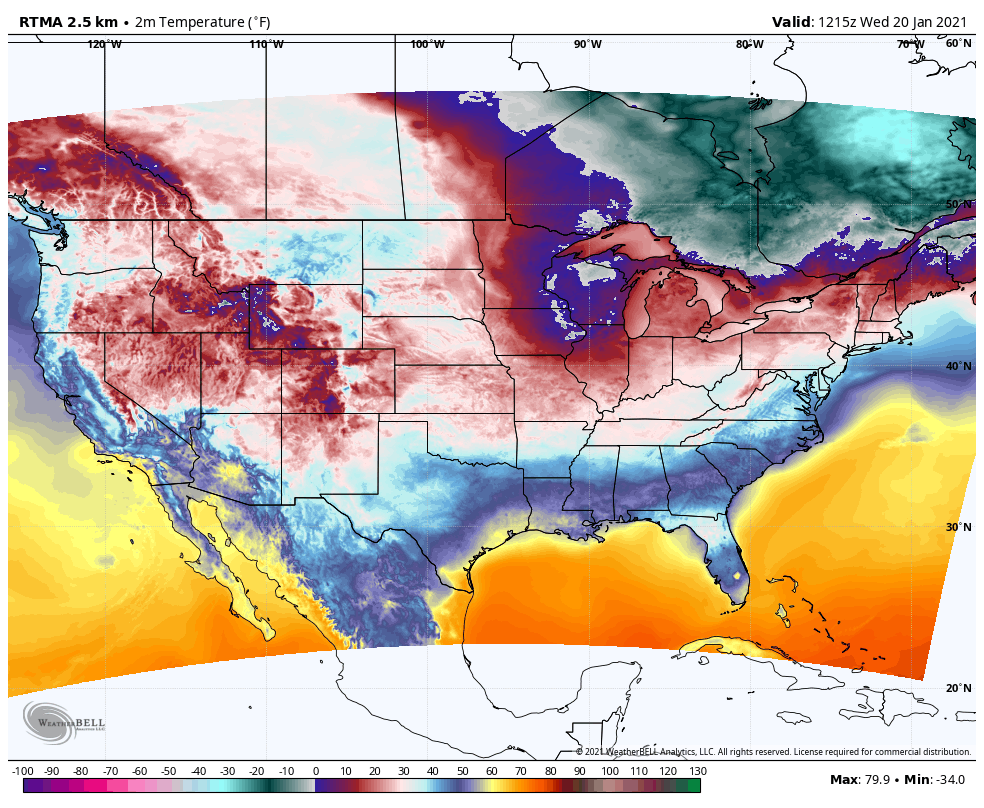 Congratulations to the Texas coast — the warmest part of the continental United States this morning. (Weather Bell)

Today is the last day for the rest of week during which there won’t be at least a slight chance of rain. So that’s something, at least. But that doesn’t mean we’re going to see lots of sunshine. Rather, with winds shifting to come from the southeast later today we should see partly to mostly cloudy skies, and high temperatures in the upper 60s. Lows tonight probably won’t fall below 60 degrees for most of the region. Fog may become more widespread overnight.

The end of the work week should see warmer weather, with highs in the low- to mid-70s and mostly cloudy skies. Houston will see decent chances for light rain, but the better chances will be across our northern counties, closer to an advancing front. This front should finally move offshore—briefly—on Friday night. This may allow temperatures Friday night to drop into the 50s for most of Houston. 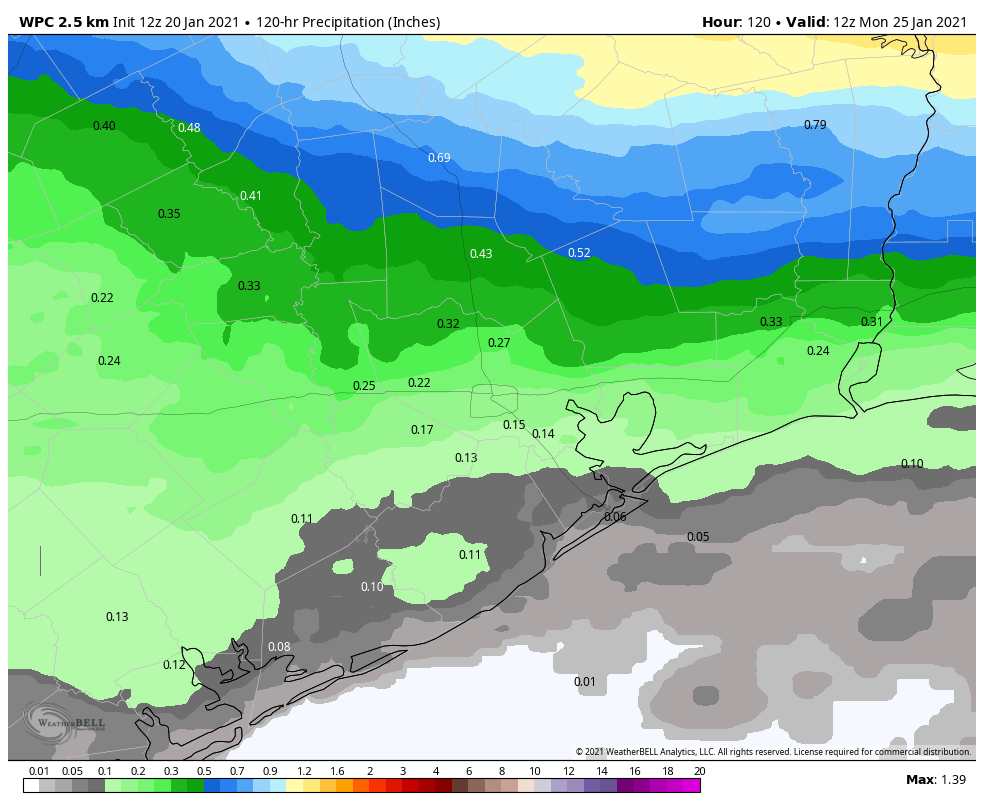 It will be a gray week, but overall rain accumulations should not be too high. This map shows forecast totals through Sunday. (Weather Bell)

Saturday will start off drier, but as this front quickly moves back onshore, we’ll see more clouds and later in the afternoon at least a slight chance of showers. Highs will be in the 60s. Sunday will be warmer and more humid as the southerly flow becomes more established, with highs in the 70s. Rain chances will probably be in the neighborhood of 40 percent, or so.

We’ll see more rain chances on Monday before a Pacific front—which just means it originated more from the Pacific Ocean than a colder, Arctic front diving down from Canada—brings us a modicum of cooler and drier air. Tuesday and Wednesday of next week may actually bring some sunshine, and lows in the 50s. A return to winter-like temperatures, which I’d say for Houston means lows at least in the 40s, seems unlikely before the very end of January.

As noted in Monday’s post, Houston’s weather is now making a pretty hard transition into something other than winter-like weather. Over the next week to 10 days we’ll see much warmer conditions—although I don’t think high temperatures will reach 80 degrees—to go along with plenty of humidity and lots of clouds. If there’s a silver lining its that, while we expect decent rain chances during the coming period, we don’t really have any indication that the region will see heavy rainfall.

Today’s weather will be driven by a cold front that is advancing toward Houston but will stall somewhere. But where? It now looks as though the front will reach the College Station area around sunset, and may sag toward Interstate 10 in Houston overnight and possibly reach the coast. The front will produce decent rain chances to the northwest of Houston today, but I think we’ll only see scattered to isolated showers in the metro area itself. Otherwise, we can expect highs in the low 70s today, with overnight lows depending on the progress of the front. Most areas will probably drop into the 50s. 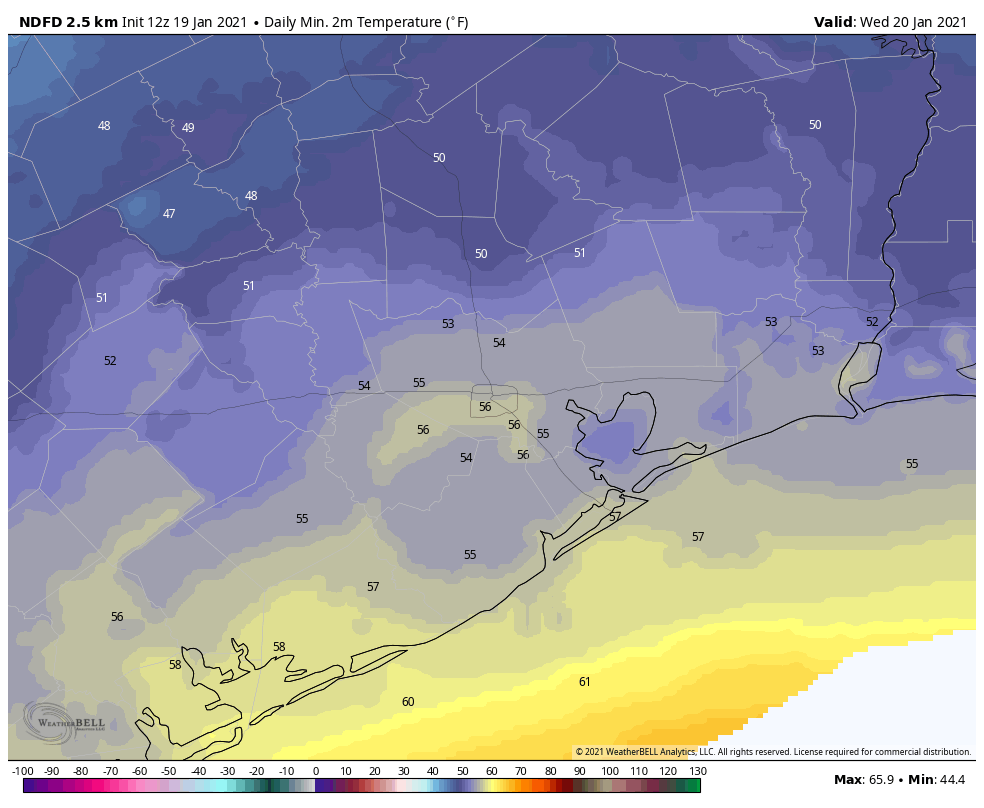 Low temperatures on Wednesday morning will vary widely across the region. (Weather Bell)

With the weak front effectively stalled out over Houston, conditions on Wednesday will probably yield mostly cloudy skies, with highs somewhere in the 60s. Overnight lows on Wednesday night are unlikely to drop below 60 for much of the area as winds return from the southeast.

The end of the work week should see highs in the 70s as Houston falls under a predominantly southerly flow, with mostly cloudy skies. Rain chances both days look decent—better for areas north of Interstate 10, likely—but again mostly we’re talking about accumulations of a few tenths of an inch of rain. A weak “backdoor” front should slide into Houston from the northeast on Friday night, bringing a brief cool down.

In the wake of the front, which is probable but not certain, Houston should see mostly cloudy skies and highs in the 60s on Saturday. This front should wash out pretty quickly, however, and as a result I’d anticipate rain chances returning on Sunday, along with highs in the 70s. 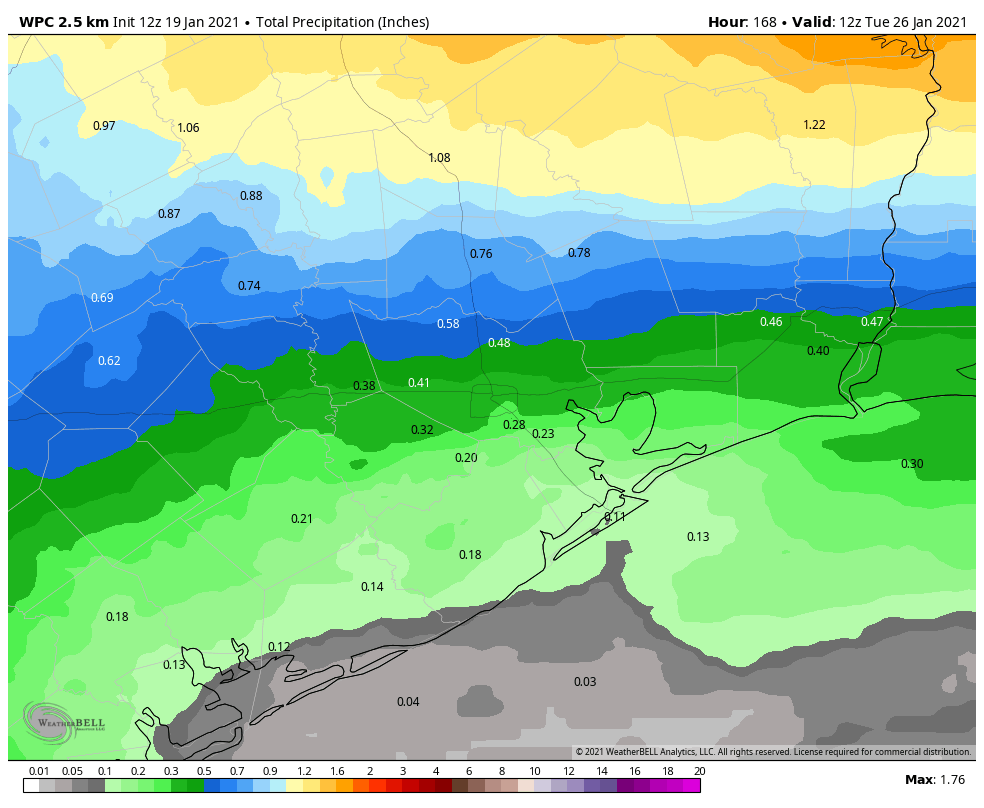 It looks like we’re going to have to wait until the Tuesday to Thursday time frame of next week before we see a stronger front that moves off the coast, clears our skies, and brings drier sunny weather back to Houston. That should offer us a decent reminder that it is still, in fact, January.