Earlier today, I did a short telephone interview with The Weather Channel. Nice people. But they were really playing up the potential for serious flooding in Houston tonight. I offered a mild correction—that this was kind of a characteristic spring storm, and not something too worrisome—but that message seems to be getting lost. So let me reiterate it: Yes, some heavy rains are coming to the region this evening, and during the overnight hours, probably widespread accumulations of 1 to 4 inches, with higher isolated totals. No, we don’t expect widespread mayhem. 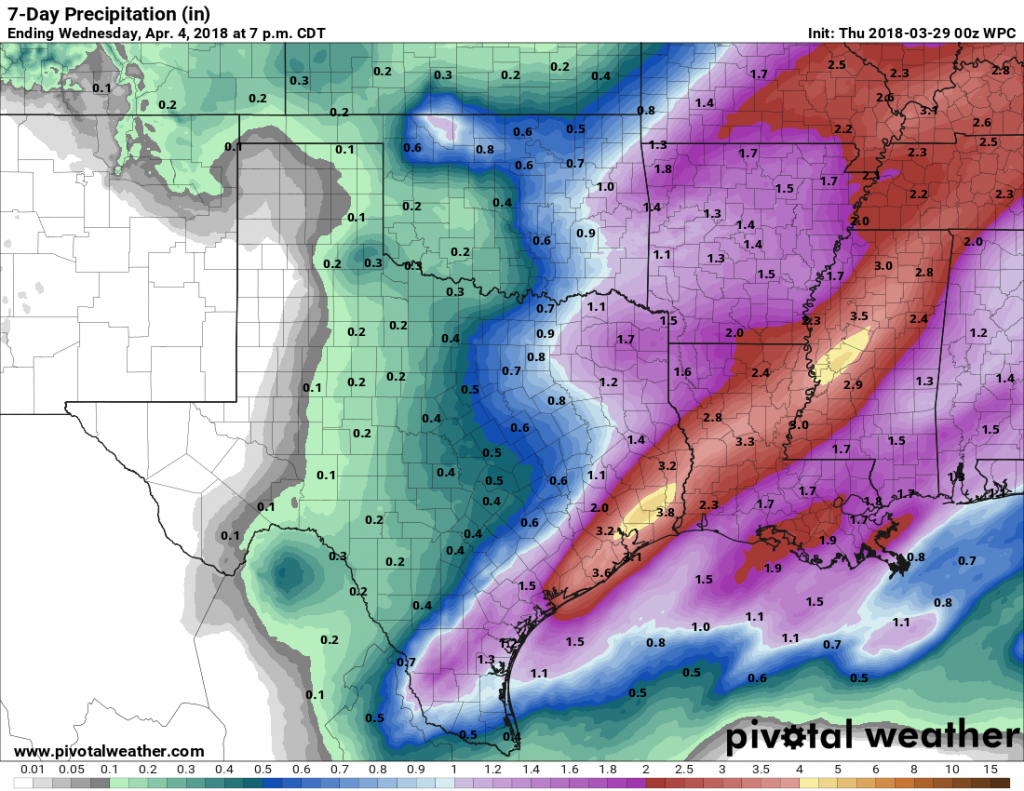 Rainfall accumulation forecast for now through the weekend. (NOAA)

The setup for heavy rainfall is clear; a slow-moving cold front is moving toward Houston and lifting the warm, moist air at the surface. Some training of heavy thunderstorms is possible as the convective activity feeds off of the warm Gulf of Mexico moisture. Fortunately, the front itself should move off the coast on Thursday, taking this mess with it. Here’s the outlook for Houston until then.

So far today the heaviest rain showers have largely remained to the west and north of the Houston metro area, but as the front sags toward Houston that will change. Short-term modeling shows heavier rain showers moving from west to east into the northwestern part of Houston around 5 to 6pm, and pushing into the rest of the metro area later on. Heavy rainfall (and associated street flooding) is the primary concern, but we also can’t rule out some hail or a few tornadoes. As rains move into your area, it’s best to avoid driving if possible.

After this initial line of storms moves through Houston, it appears as though a second area of storms may move from southwest to northeast through the region after midnight. These storms, too, will be capable of producing heavy rainfall, and briefly flooding streets. The good news is that these storms will occur when most people are safely at home. The bad news is that they’re probably going to wake you up.

Most of the model guidance suggests that the storms will be exiting the Houston area by around sunrise on Thursday, and any flooding problems should clear up pretty quickly. After this, as a bonus, our pollen problems should ease up.

32 thoughts on “Please don’t freak out about tonight’s storms, Houston”