Just want to give everyone a quick update this early afternoon.

The National Weather Service has issued a Tornado Watch for most of the region through 9 PM tonight. This means that the environment over Houston is favorable for severe thunderstorms and possibly tornadoes.

Showers and thunderstorms are focused mostly north and west of Houston this afternoon. With some breaks in the clouds south and east of Houston, the atmosphere is becoming a bit more unstable. For that reason we expect a few more showers and thunderstorms to develop across the region. The environment over Houston is favorable for storms today to become strong or severe if they can get going. 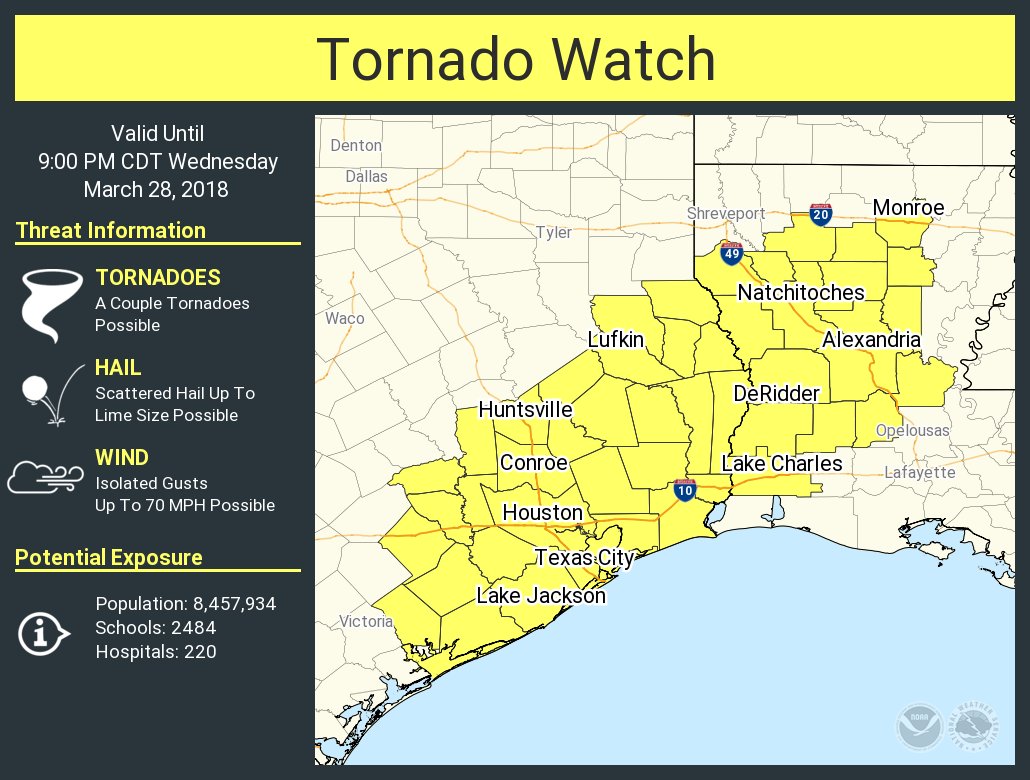 A Tornado Watch means conditions are favorable for the development of severe storms and possible tornadoes. (NWS)

The main threats are isolated hail and damaging winds (we’ve already had some wind damage reported from a storm up near Lake Livingston earlier). Isolated tornadoes are possible, though we don’t expect things to get too out of control here today.

The rest of the forecast as described by Eric earlier is mostly on track. We’re still toying around with specifics on timing of the heavier rains (which should be tonight). Some of you may not see much rain at all during the day today. But others will see heavy rains at times. We don’t see any reason to change our thinking on flooding concerns: 1-3 inches of rain widespread, with pockets of 3-5″+ and street flooding in spots. Bayous and creeks still look to be able to handle this event fairly well, and we are not too concerned about issues with any of them right now.

Eric will have another update for you later this afternoon.

14 thoughts on “Tornado Watch for Houston through 9 PM Wednesday”