It is quite cool the morning across Houston, with low temperatures generally from around 50 to 55 degrees across the region, and only a bit warmer along the coast, thanks to a cool front that moved through the region early on Sunday. This exceptionally pleasant weather will last another day, or so, before our concerns begin to turn again toward the possibility of some heavier rain.

After a chilly start, a sunny day will allow afternoon temperatures to climb into the low- to mid-80s by this afternoon. Winds will be moderate as they shift to come out of the south later this morning, but humidity levels should remain fairly low. Look for another marvelous evening, with temperatures cooling as the sun sets. Overnight lows will be about 10 degrees warmer than on Monday morning, but still seasonably pleasant for late spring.

As southerly winds pick up a little bit, humidity will return to the area. This, in combination with a mostly sunny day, will make for warm conditions for Houston. Look for highs in the upper 80s.

A combination of factors appear to be coming together that will produce a very healthy chance of storms during the middle of this week. Moisture return from the Gulf of Mexico really gets going later on Tuesday night, which will provide plenty of potential for rain to the area. 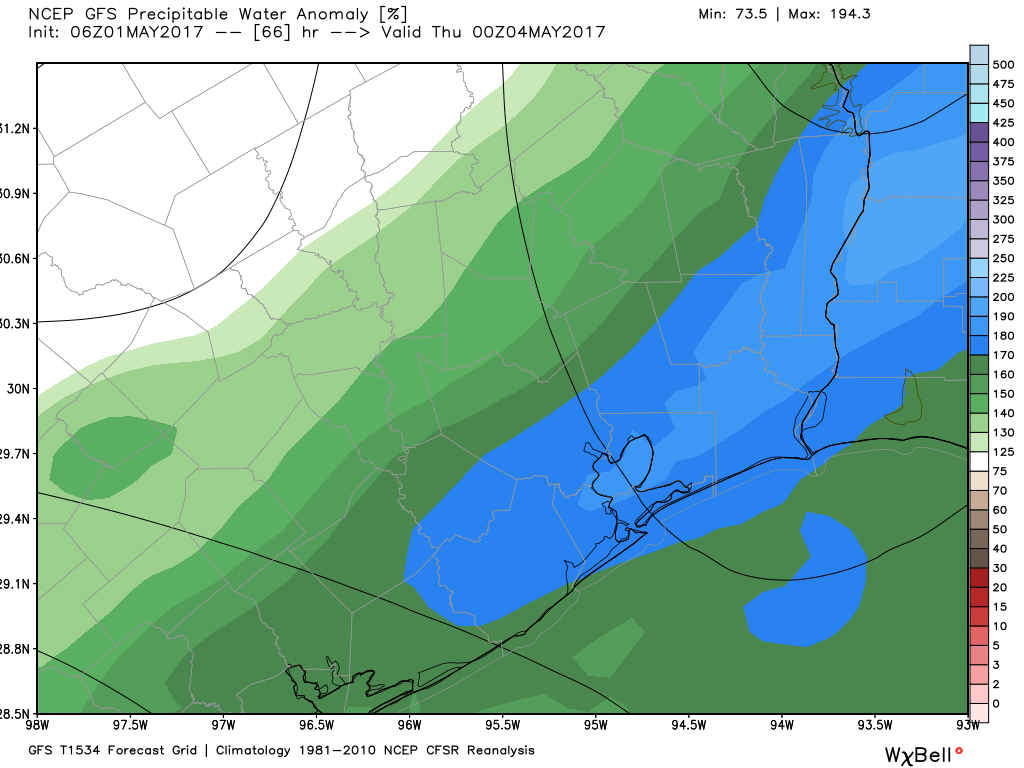 By Thursday afternoon atmospheric moisture levels may be about 200 percent of normal across Houston. (Weather Bell)

Unlike this past Saturday night and Sunday morning, when a capping inversion held heavy rains at bay, the cap for Tuesday night and especially Wednesday looks to be fairly weak. If this cap breaks, which I’d bet on at this point, we’re going to see a really healthy chance of rain, and potentially some severe thunderstorms and hail. Right now the dynamics aren’t 100 percent favorable for severe weather, but we’re going to have to keep an eye on it.

Rain chances look best along the coast, where the most moisture is available. As an upper-level system pushes into the area on Tuesday night, we could see some heavy rain early on Wednesday morning, followed by a break in the weather, before more chances of heavy rain during the afternoon and evening hours. Right now I’d guess areas north and west of Houston might see around 1 inch of rain, with amounts closer to 2 to 3 inches more likely along the coast. Storms should end sometime Wednesday evening or night.

Thursday into the weekend

After we get through some potentially messy weather on Wednesday, the rest of the week and the weekend looks really pleasant for Houston in the wake of the cool front. Daytime temperatures will go from the upper 70s on Thursday into the lower 80s on Sunday. Overnight lows will remain in the upper 50s to lower 60s through Sunday morning. This will definitely be a great weekend for any outdoor activities you have planned. And if you don’t have outdoor activities planned, what are you waiting for?

Posted at 6:15am CT on Monday by Eric

7 thoughts on “After a gorgeous Sunday, chance of heavy rain later this week”