Temperatures have only fallen down to around 60 degrees for most of Houston this morning, and we’ll have one more warmer day today before cooler weather returns with a front tonight, and lasts for the rest of this week.

Highs today should generally get up to around 70 degrees, with mostly cloudy skies keeping them from getting much higher. Winds will be blowing out of the south today, increasing moisture levels ahead of a cold front tonight. Although scattered showers will be possible during the daytime, by far the best chance of rain will come tonight with a line of precipitation along the front. The front should reach areas northwest of Houston between 9pm and midnight, roll through Houston sometime between 11am and 2am, and should be off the coast by or before sunrise Wednesday. At this time, accumulations of 0.5 to 1.0 inch of rainfall are likely. 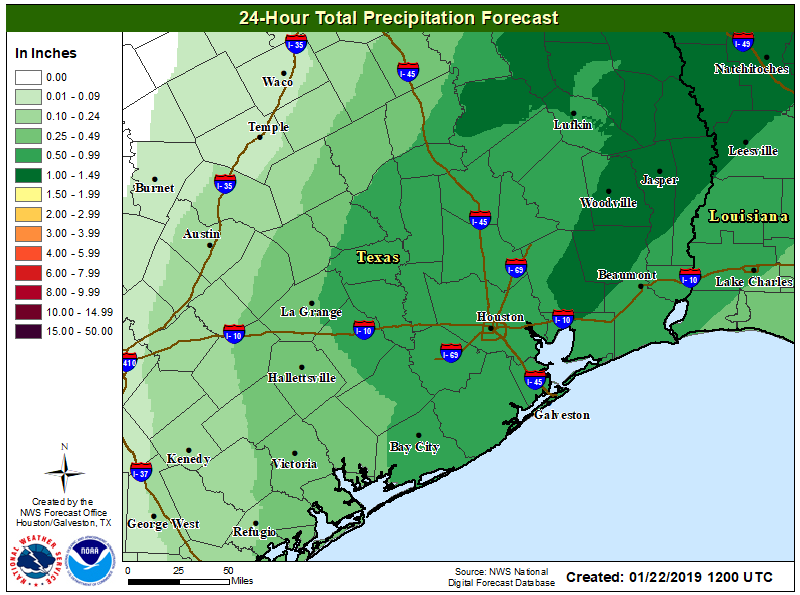 Most of Houston is likely to see 0.5 to 1.0 inch of rain Tuesday night and early Wednesday. (National Weather Service)

It should be noted that some models have been hinting at the possibility of snow or sleet for areas northwest of Houston, such as the Brazos Valley, with this system. However it seems most probable that the colder air needed for wintry precipitation will lag far enough behind the precipitation to preclude this. Can’t rule it out, but it seems doubtful. The chance of seeing anything like this in Houston itself is pretty near zero.

Any lingering rains should end by 8am or 9am, and skies should clear out on Wednesday morning, with winds gusting up to 20mph out of the north. Highs will struggle to reach 50 degrees despite the sun. Lows Wednesday night should reach freezing for inland parts of the metro area. 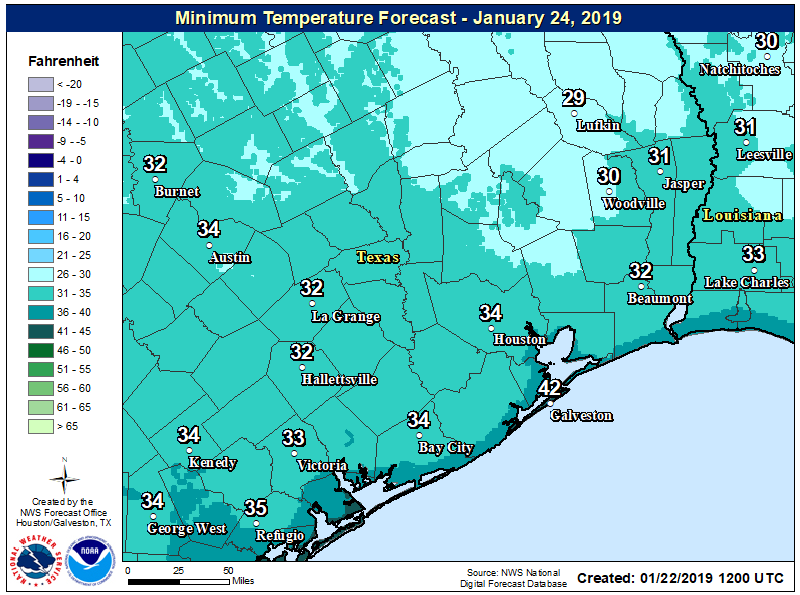 Wednesday night will be cold across Houston. (National Weather Service)

Sunny, clear days, with highs in the 50s. Lows Thursday and Friday nights will be cold, but not freezing.

The weekend forecast is coming into a bit better focus, and Saturday should see increasing clouds as moisture begins returning from the Gulf of Mexico. Highs probably will get somewhere into the 60s. After this time, some kind of system appears likely to move through later Saturday and Sunday morning. This may bring some rain showers, or it may not (in either case, accumulations look slight), and it may bring some cooler air, or not. As of now, Sunday itself will probably see some sunshine later in the day, with highs in the 60s.

Forecast models indicate the arrival of a stronger cold front during the Tuesday-ish time frame next week, and this one will bring another blast of colder air. It’s too early to tell whether this will push lows below freezing, or just into the upper 30s for the region.