After a mostly benign afternoon, with the exception of some street flooding in Galveston, we are back in the thick of things now, as Imelda’s Wednesday night show is underway.

We just had a reported tornado west of Mont Belvieu, and a funnel cloud sighted in Deer Park. Other storms across the area are exhibiting at least some weak rotation, and it would not be surprising to see at least one or two more tornado warnings get hoisted before all is said and done.

We just got this photo of what appears to be a tornado on the ground. Brian Lockwood told us he snapped this near N. Main and 1942 headed towards Mont Belvieu. pic.twitter.com/ipA6S0bAg5

Tornado confirmed. This is looking north from Baytown toward Crosby. 📹: Deepa Singh

Hard to see with brightness, but a decent funnel over Deer Park headed south. #houwx pic.twitter.com/K4Ee834jir

In terms of rainfall, a transient heavy rain band is setup along and south of I-10 from near Fulshear through Baytown as of 5:35 PM. That does not appear to be a “training” band at this time, but we’re watching to see if additional development will occur on the western flank. A secondary band is setup over Wharton County moving toward hard hit Matagorda County and parts of Brazoria County as well. 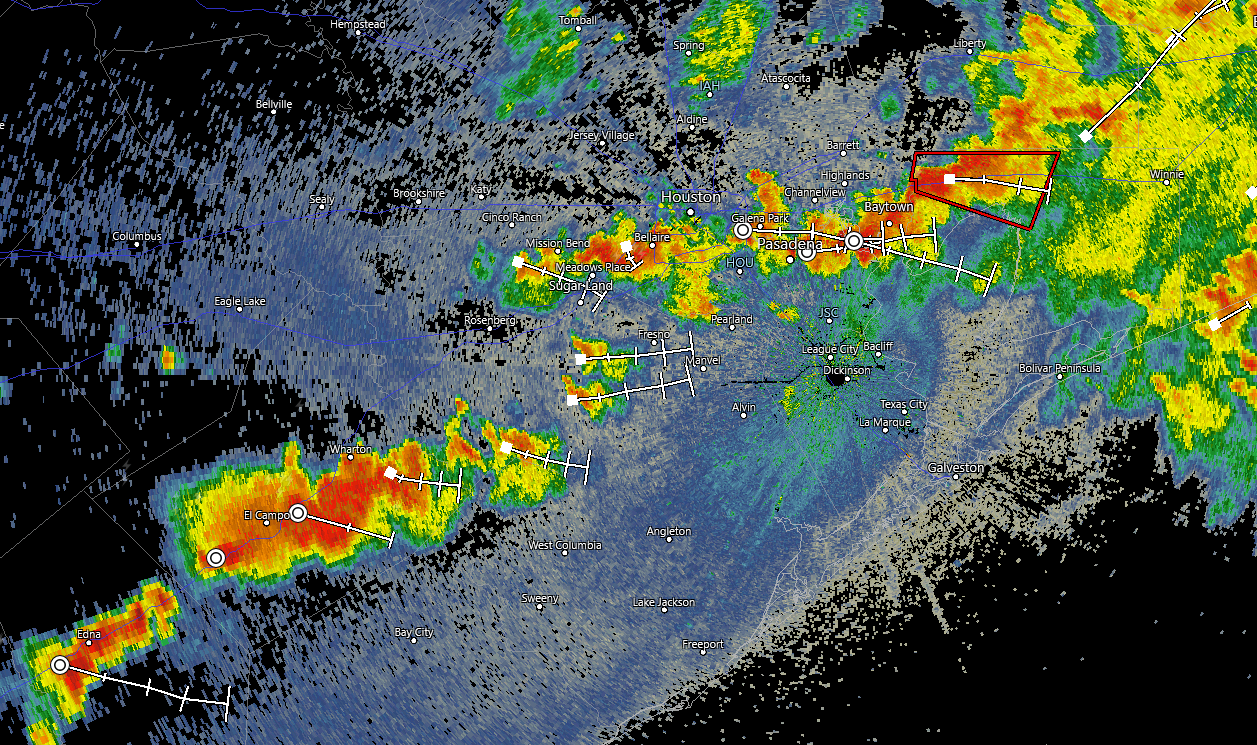 The radar situation at 5:35 PM Wednesday shows heavy rain in spots along and south of I-10 and also toward Wharton County, heading toward Matagorda and Brazoria Counties. (RadarScope)

So what are the expectations for the rest of tonight? I’ve tried to digest as much observational and model data as I can, and here are the key bullet points I think we can emphasize.

I tried to cover as much as possible there. Folks farther northeast, in San Jacinto, Polk, and Tyler Counties will also see periods of heavy rain tonight and potentially some flash flooding.

Weather modeling has been all over the map in terms of how things finish late tonight and Thursday morning to the point of agitation, to be honest. However, some newer data is indicating that a more concentrated band of heavy rain could develop across Grimes and Montgomery Counties into northeast Harris and Liberty Counties, extending east, again, toward Beaumont. Should that occur, significant rain and potential flash flooding would occur, which could include The Woodlands, Spring, Humble, Bush Airport, and Kingwood. I want to just urge caution on that, as we still have some uncertainty surrounding how that will unfold. We will either update you later this evening or very early tomorrow morning.