Houston officially topped off at 81° yesterday, our warmest February day since way back on February 6th, when we hit 82°. More importantly, we had some sunshine yesterday, which was a pleasant surprise. We won’t be seeing much more sun until Friday.

Today is starting off cloudy inland and foggy along the coast. We probably won’t see much change in that situation through the day today.

In terms of rain chances today, those will be highest north of about The Woodlands, so from Navasota over to Conroe up through Huntsville and over toward Lake Livingston; basically along or north of Highway 105. Some of the rain could be heavy at times later this afternoon up that way, and thunder will be possible too. Closer to Houston or the coast, a few showers will be possible through this afternoon but they will probably not amount to much.

Oh, and it’s going to be a warm one again today. We should make another run toward 80 degrees this afternoon, but with more clouds than yesterday, we will probably end up a little short.

The cold front will be located somewhere north and west of Houston early this evening, probably from about Lake Livingston through Conroe through about Sealy. Through the evening, the cold front will progress into and beyond Houston to about the coast by midnight or so. Look for scattered showers and a chance of thunderstorms tonight. 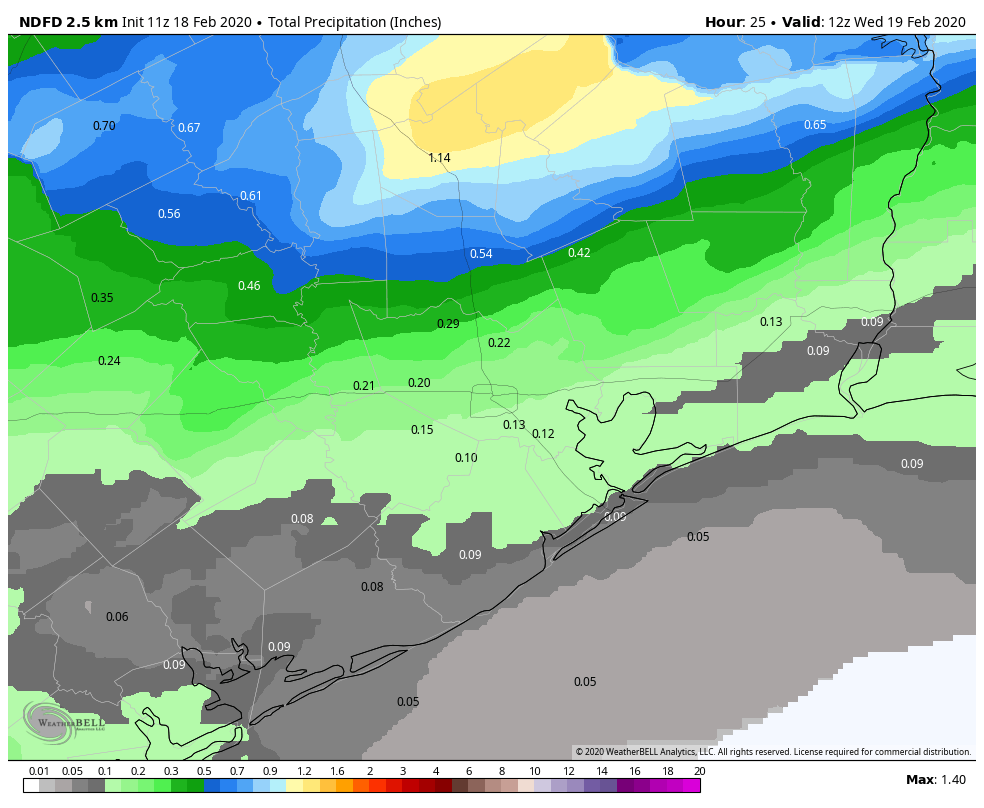 Total rainfall through Wednesday morning will be highest along Highway 105, lowest near the coast. (Weather Bell)

Rain totals will be highest today and tonight to the north of Houston. It is possible that some folks from I-10 southward may not even see a drop of rain. I would expect a range of 0.10 to 0.25 inches of rain on average along and south of I-10 through Wednesday morning, increasing to 1 to 2 inches or so north of Conroe. A couple spots up from Conroe or Huntsville over to Lake Livingston could see as much as 3 inches or so if we see slower moving, better organized thunderstorms later today and this evening.

Temperatures aren’t going to plummet behind this front, but they will drop about 10 degrees in its wake, from the 60s into the 50s this evening. By daybreak Wednesday, we should be in the low-50s or upper 40s from Houston north and mid- to upper-50s south.

Despite the front being offshore, Wednesday will be a cloudy day. Showers or light rain will be ongoing in parts of the area. The most sustained rainfall on Wednesday should again be along or north of Highway 105, so we’re talking Aggieland through Conroe. We could see upwards of another inch or so in those parts. Rain may fall steadier than today a bit farther south tomorrow, closer to Tomball or The Woodlands. But in the Houston area and points south, expect only occasional light rain, drizzle, or showers.

Temperatures are not really going anywhere tomorrow. We will probably finish the day within a couple degrees of where we start the day. So, dress for generally middle 50s, perhaps a bit milder south or colder north.

By the time we get to Wednesday night and Thursday morning, the ingredients necessary for rainfall will drift a bit closer to the Houston area. They will also begin to slowly fall apart. So steadier rains, that to this point will have fallen mostly along and north of Highway 105 may finally drop into the US-59 and I-10 corridors, if not to the coast. Rain chances in Houston will at their highest in the late overnight and morning of Thursday. 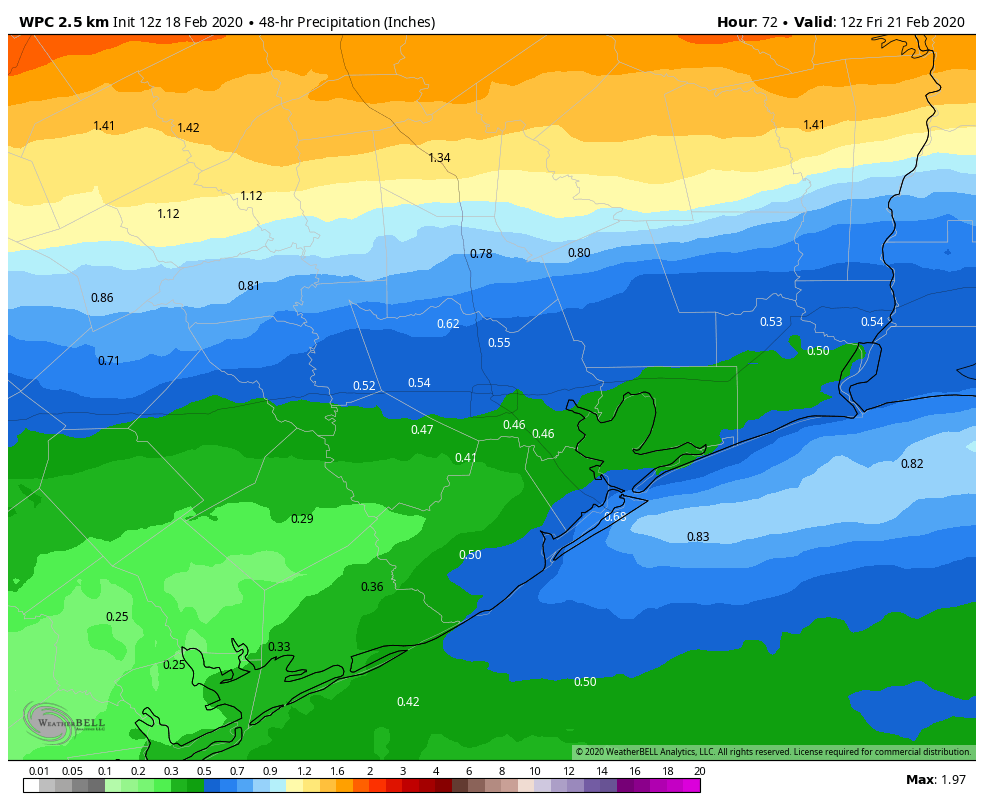 Additional rainfall between Wednesday morning and Thursday evening will total over an inch north of the Houston area, with higher amounts possible. In Houston to the coast, expect about a half-inch or so of rain. (Weather Bell)

As Thursday wears on, look for the rain to wear out and wind down. Rain chances will gradually end by evening. Temperatures will trend downward later Wednesday night as a reinforcing shot of cooler air arrives. Look for low 50s or upper 40s by Thursday morning. Much like Wednesday, I don’t expect temperatures to fluctuate much during the day Thursday, holding steady within a few degrees of 50 most of the day. It will feel rather cold.

Thursday will add a new wrinkle: Wind. While Wednesday looks somewhat breezy, stronger north or northeast winds will howl during the day Thursday, gusting to 20 or 25 mph, making it feel all the more chilly. 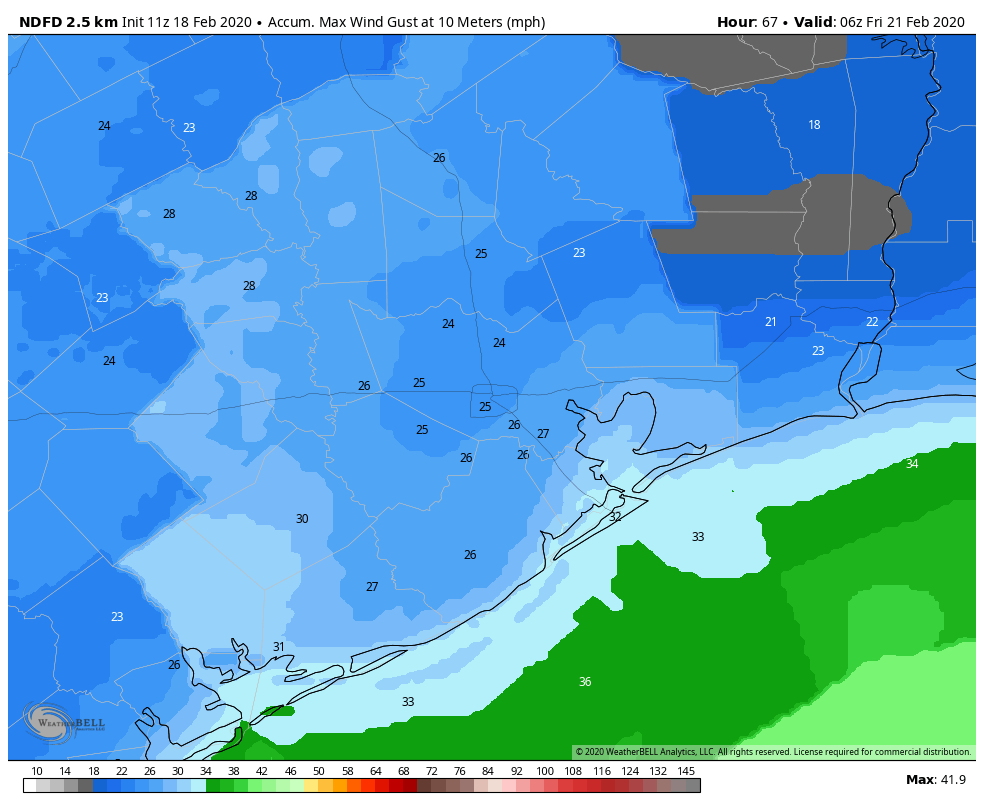 Maximum wind gusts on Thursday should top off at 30 to 35 mph over the water or at the coast and 20 to 25 mph inland. (Weather Bell)

At the coast or over the bays, gusts of 30 mph or higher will be possible.

This will be our day of clearing. Look for any lingering morning clouds to become patchy or scour out completely on Friday. We will start the day in the low-40s or a bit colder and warm with some added sunshine into the mid-50s.

Onshore flow will resume this weekend. Increasing clouds will join us on Saturday, followed by a chance of showers or patchy fog Sunday. We will hit the low-60s on Saturday and upper-60s on Sunday. Another cold front looks poised to arrive behind Sunday’s showers.

3 thoughts on “Steadier rains mainly north of Houston through Wednesday”