As expected, we ran for 80 degrees yesterday but came up just short, hitting 79° at Bush and Hobby. Today, many of us will probably not even get to 60°.

It’s a much colder start to the day today for sure. 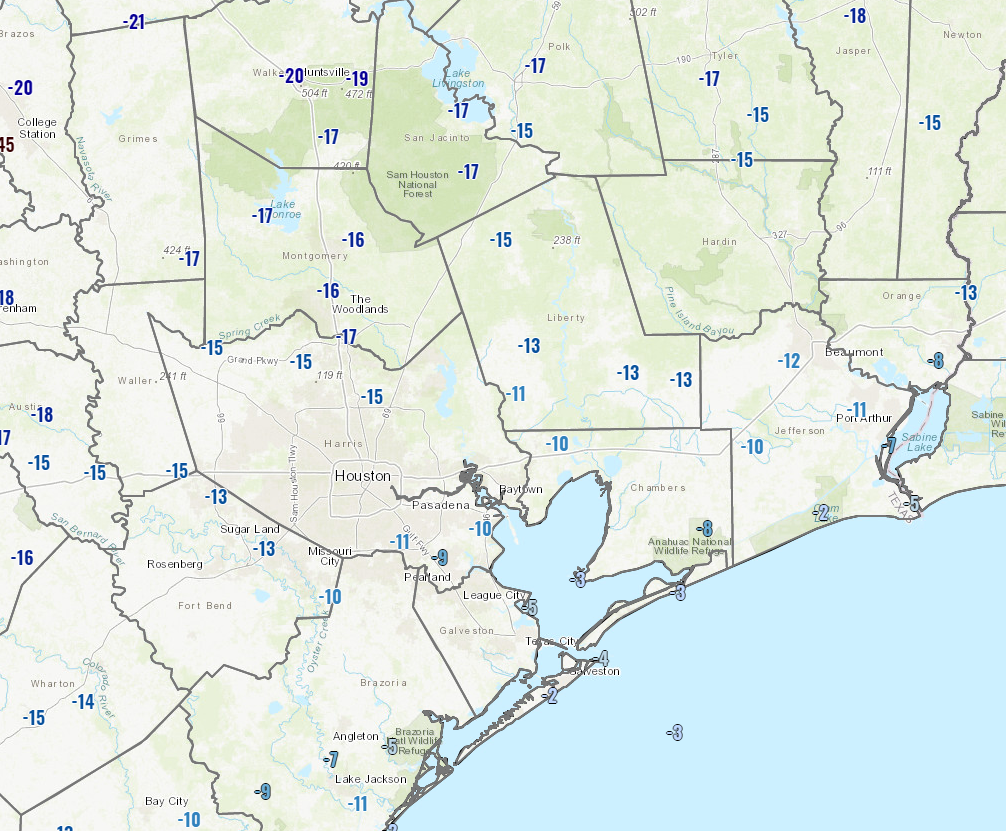 This map shows how much temperatures have changed since the same time yesterday. We are running about 15 degrees colder than Tuesday morning. (NOAA)

Temperatures across most of the area are running about 15 degrees colder than yesterday at this time. At the coast, it’s a bit less than that. Our current temperatures will not move a bunch either. Look for high temperatures to perhaps end up only 2 to 4 degrees warmer than where they’re at this morning. Basically, expect 50s all day today inland, near 60 at the coast.

How about rain? Well, if you live in Houston or Harris County and points south and were hoping for rain by now, you’re probably getting a little frustrated. Like we told you yesterday, the bulk of the rain was expected to stay north of Houston, and it did, way north. We’re starting today similarly. 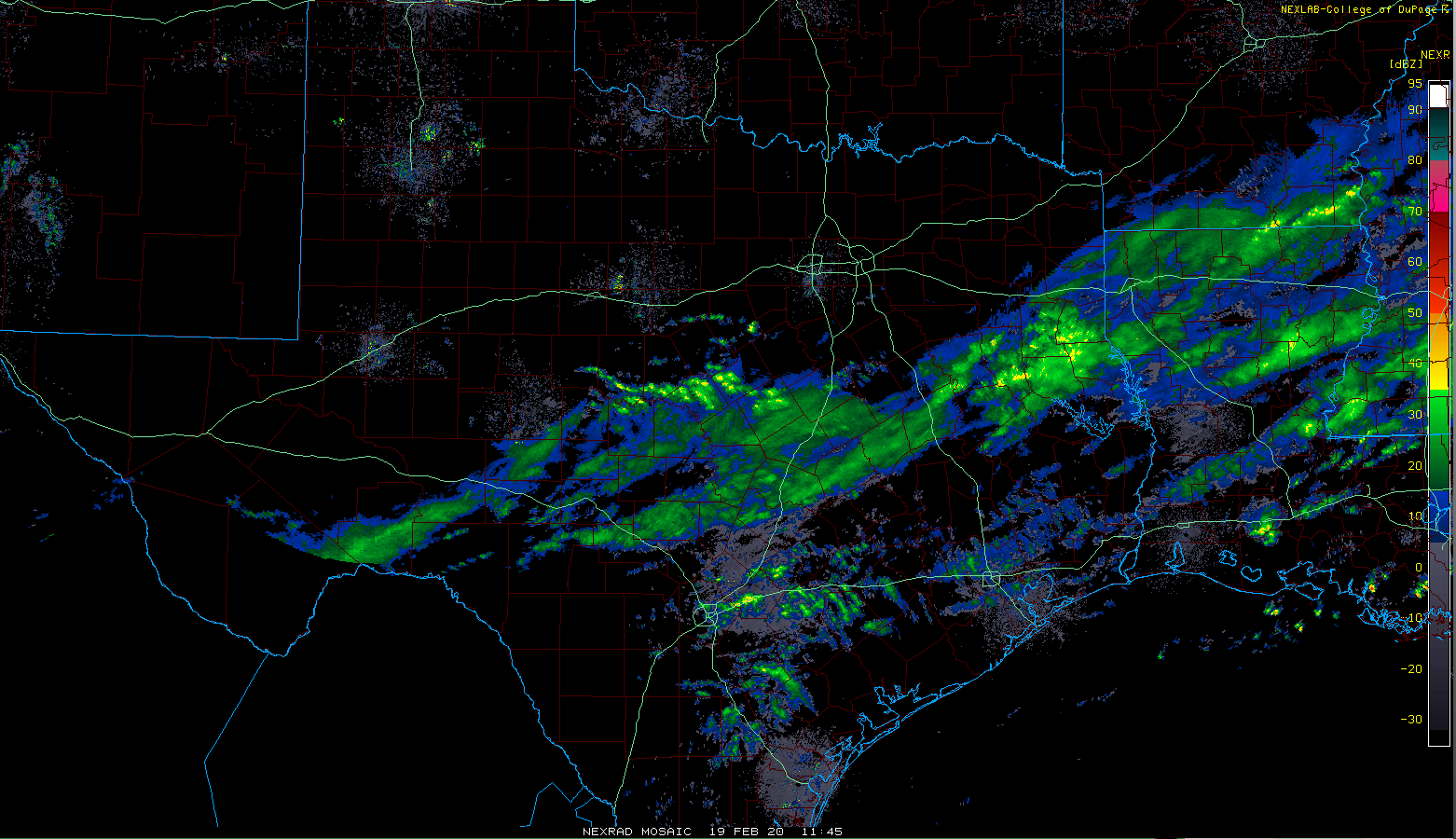 While there may be light rain, drizzle, or mist this morning, the bulk of any steady rain is staying well north of Houston. This should mostly continue until tonight. (College of DuPage)

The steadiest rain this morning is way up north between Huntsville and Corsicana. In the Greater Houston area? Light rain, drizzle, mist, and nothing more than a couple passing showers. This should be the case for the majority of the day today, with perhaps that steadier rain nudging south late toward Huntsville or Conroe.

Rain will continue slowly dropping southward late tonight, but the whole system will begin to also lose steam. The current thinking is that most areas north of I-10 will see at least some rain, with the heaviest amounts being, again, way north toward College Station, Huntsville, or Lake Livingston, possibly even north of there. The whole mess drops, somewhat disjointed into the rest of the area overnight. We could see some heavier showers or thunder along the coast late tonight.

Temperatures will drop to the low- or mid-50s south and upper-40s north by Thursday morning.

The entire system will basically fall apart over us, meaning rain chances will gradually trend downward through the day, with rain mostly ending by afternoon. Clouds should linger, and much like Wednesday, temperatures will probably end the day near where they begin the day. Look for temperatures in the upper-40s or low-50s most of Thursday.

As noted yesterday, the wind is expected to whip up on Thursday too. An offshore breeze of about 15 to 25 mph will build during the morning or early afternoon inland, with 20 to 30 mph winds and higher gusts over the bays and along the coast.

Clearing should commence around midnight Thursday night into Friday morning. Temperatures have trended a little colder since yesterday, and I suspect many of us will wake up on Friday morning to low temperatures in the 30s. A few of the coldest spots north and west could approach the lower 30s. 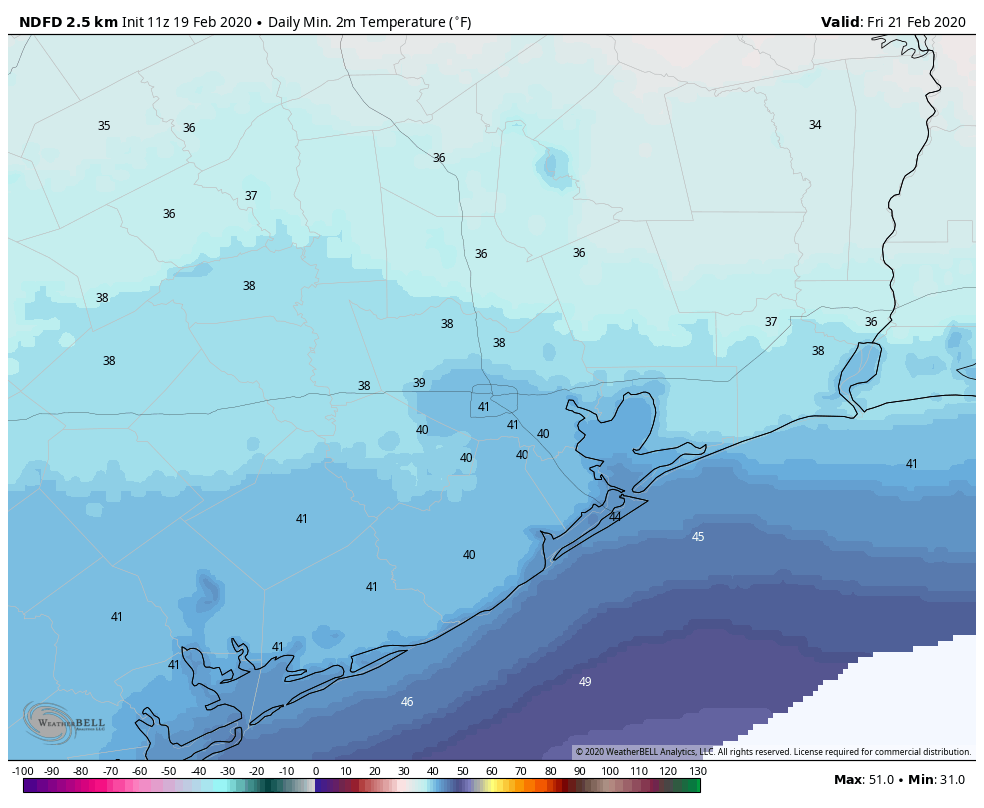 Morning lows via NWS will be generally in the 30s north and west to near 40 south by Friday morning. (Weather Bell)

Friday itself looks like a spectacular late winter day. Expect sunshine and high temperatures warming into the mid-50s.

After another chilly morning on Saturday, we will see more sunshine, with perhaps a few more high clouds. We should hit 60 degrees as light winds flip back onshore.

Temperatures may actually start rising before daybreak on Sunday, back into the low-60s on Sunday morning. A cold front will approach Sunday afternoon or evening, bringing clouds and a chance of showers in the afternoon. I’m not going to call Sunday a washout, but I do think most of us will see some rain at some point in the late afternoon. Look for temperatures approaching 70 degrees before the front pushes through.

I don’t want to get too into the details here, but the current thinking is that we will have a fairly pleasant day Monday, followed by increasing clouds on Tuesday. As of right now, our next front looks pretty moisture-starved, but potent, arriving at some point on Wednesday. We would see clouds ahead of it, perhaps some showers, and then clearing for later Thursday, along with blustery conditions. This air mass does look as though it will come in a good bit colder than normal, so I think we have a realistic shot again at lows in the 30s next week. Friday would likely be dry with increasing clouds and onshore flow gradually returning.

For now, the rodeo cook-off may end up alright, albeit a bit cold perhaps on Thursday evening. A lot can change between now and then, particularly in terms of the details. But the main takeaway is that we will continue to see some legitimate cold fronts and cool air, even if temperatures are not super cold.