Brace your sinuses: We will be dealing with some ups and downs over the next 7 to 10 days. We’re about to end one of the “ups” and head into a brief “down” period this weekend, but if you have weekend plans, it looks delightful. As for the forthcoming holiday weekend? I’ll be spinning the wheel of discontent to determine what to forecast for you. Read on.

We’ve seen a few showers pop up this morning across the region. As I write this, some heavier downpours are ongoing from near the Galleria into Spring Branch, lifting quickly southwest to northeast. That will be the story today: A lot of clouds and occasional showers. A thunderstorm will also be possible, especially as the cold front pushes across the area late this morning and early this afternoon. 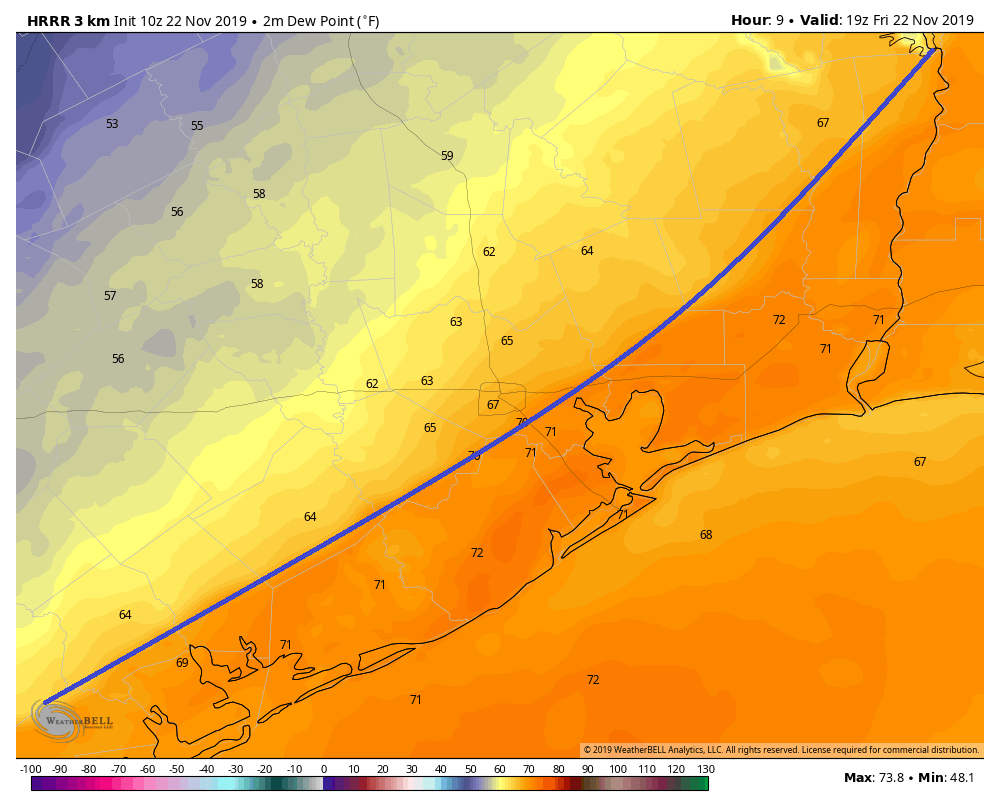 The HRRR model above depicts the front just southeast of Downtown Houston by 1 PM this afternoon. So look for the front to pass through the region between 11 AM and 3 PM before moving offshore. The temperature drop immediately behind the front will not be too impressive, but it will be noticeable. Look for temps to peak around late morning or Noon in the mid- to upper-70s. We’ll drop into the mid- to upper-60s an hour or two after the front passes by.

Both Saturday and Sunday look splendid. Sunshine should dominate, punctuated by a few high clouds. High temperatures will get into the mid- to upper-60s. 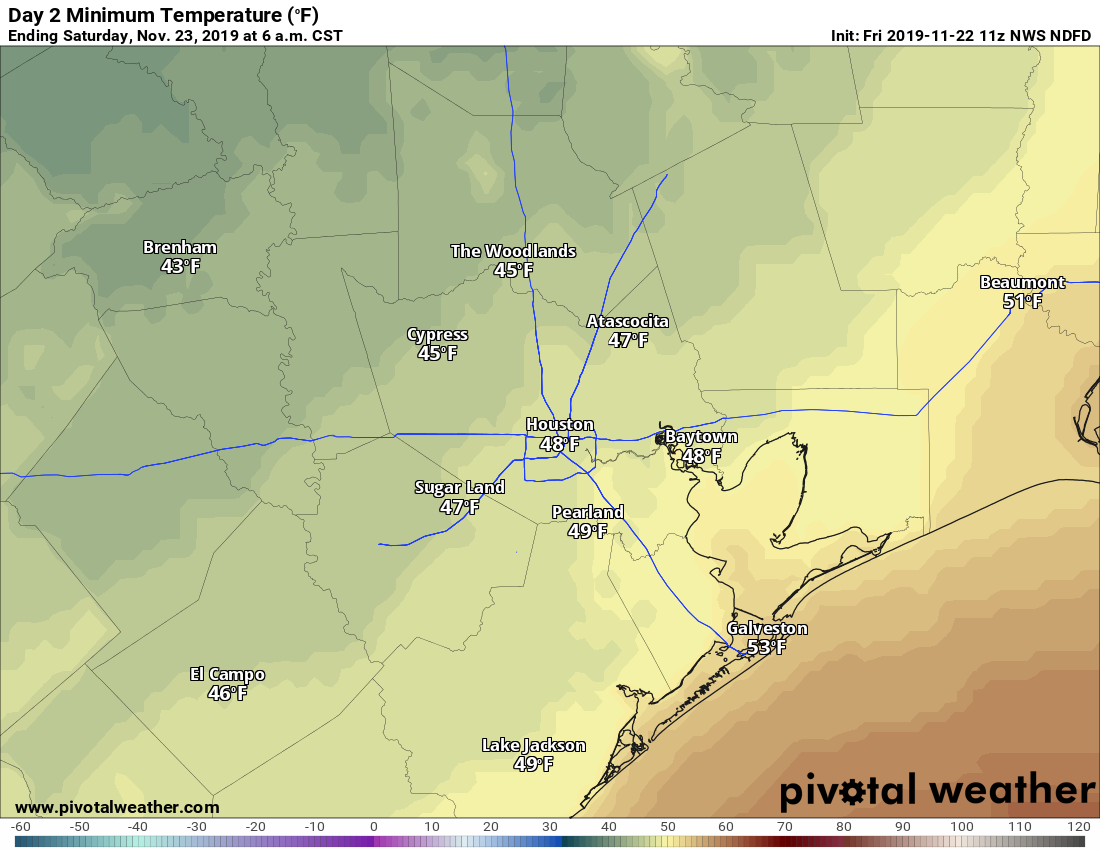 We will start Thanksgiving week with sun and some building clouds. Monday will warm up a good bit into the 70s. Tuesday should see high temperatures very close to 80° that afternoon. Rain chances should be low on both days and probably limited to some isolated showers, especially south of Houston.

Weather modeling has struggled mightily in depicting the location of a cold front Tuesday night and Wednesday. Originally, that was supposed to push through here, but trends yesterday and today suggest this will now not happen. Wednesday morning’s front will probably stall out just to our north. This would allow some showers or storms to occur on Wednesday across Southeast Texas. Expect temperatures in the 70s Wednesday afternoon.

Just to visually illustrate how much this forecast has changed, here’s a look at the forecast dew point temperature, valid for Wednesday morning at 6 AM. This is the last 10 runs of the European model. Notice how after the model settled on dewpoints in the 20s and 30s (indicative of a dry air mass behind the front), things began to change yesterday, with dewpoints in the 60s and 70s.

An animation of how the forecast for Wednesday morning’s dew point has changed this week, going from a dry air mass to a humid one, suggesting the front will stall to our north. (Pivotal Weather)

These changes are further evidence that the front is now likely to stall to our north and west on Tuesday night and Wednesday morning.

Travel conditions would include rain showers until you get to about San Antonio to the west or Huntsville to the north. Shower chances diminish as you get past Corpus Christi to the south but continue east along I-10 and much of the Louisiana coast.

With the front backing up more to our north on Thanksgiving Day, we would likely see clouds, some sun, and at least a threat for a few showers. Onshore flow would be the main course with a heaping side of humidity and warm temperatures. I would expect mid-70s at best, near 80 at worst on Thanksgiving Day. Anyone doing a morning turkey trot Thursday would likely experience temperatures in the upper-60s to near 70 degrees. Not optimal.

Anything beyond Thursday gets a little less clear, but one constant in the forecast this week has been warm temperatures. We should peak Friday and Saturday, stay warm on Sunday, and then cool off behind a front Monday or Tuesday of the following week. I would say the odds are at least 75 percent that Houston sees 80° at least once over Thanksgiving weekend. Shower chances will be there each day, but they should be low. Eric will have the latest for you on Monday.

We have plenty of t-shirts to help you cope with the warm Thanksgiving weekend! Thank you to all of our readers who have contributed to our annual fundraiser. It means a lot to us.

21 thoughts on “Stellar weekend ahead, but no cold turkey this Thanksgiving”