Good morning. Confidence is increasing in the potential for severe weather this afternoon and evening in Houston. The primary threats from this will be strong thunderstorms, and the potential for large hail and downbursts. The chances for hail and damaging winds are better for the western half of the metro area.

Skies are mostly cloudy this morning, with temperatures in the 70s. Clouds will remain as highs work their way into the upper 80s this afternoon. Storms are likely to get organized off to the west and north of Houston late this afternoon, and shift into the metro area from about 5pm to 10pm tonight. While most of the region probably will get around 1 inch of rain, or less, these storms have the potential to pretty quickly drop 3 or more inches in some locations. Therefore it is possible we will see some brief street flooding later this evening. The front should exit off the coast, along with the heavier rainfall, by or before midnight. 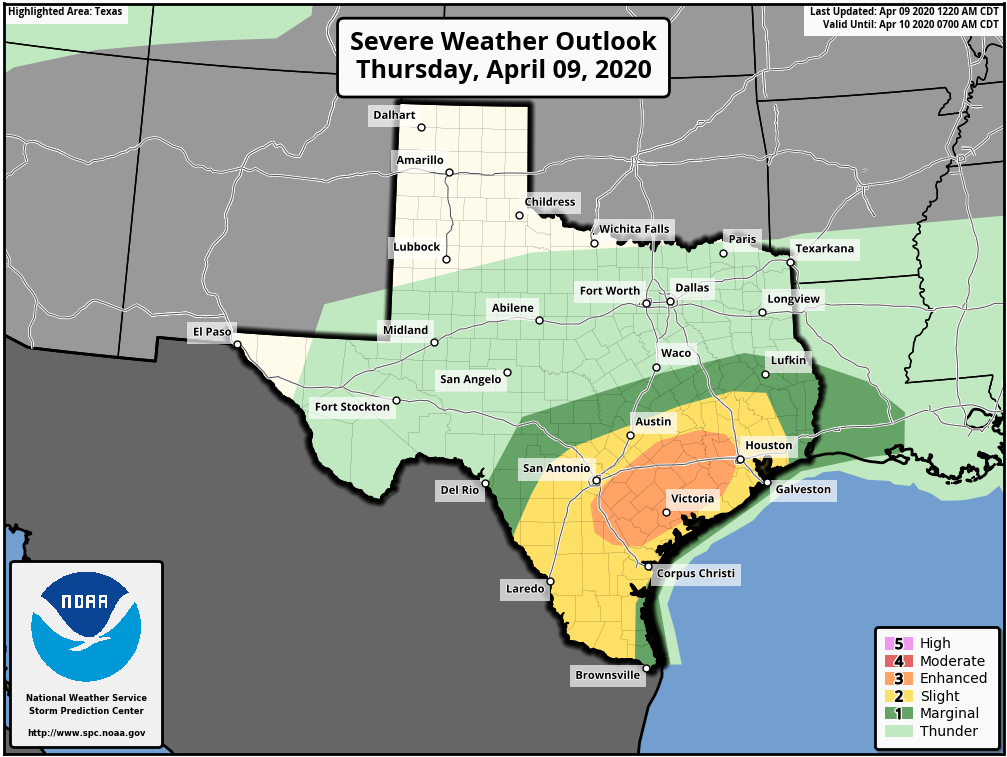 A few light showers may be possible Friday morning before sunrise, but for the most part we can probably expect mostly cloudy skies transitioning to some sunshine during the afternoon hours. With forecast highs in the mid-70s and lower humidity, this could turn into a fairly nice spring-like day. Which is good, because Saturday probably won’t be so nice.

Rainfall on Saturday will be driven by an upper-level low pressure system and the eventual passage of another cold front. This precipitation will likely be less “stormy” than conditions Thursday, with less potential for very heavy rainfall. Even so, expect parts of Saturday and Saturday night to see widespread showers, with daytime highs in the upper 70s, and lows Saturday night not cooling down much.

This day’s weather will depend upon the timing of a cold front moving in behind Saturday’s rains. The GFS model says fairly early in the morning, the European model says shortly before noon, and other models have other times. The fact remains that conditions will likely stay cloudy with a chance of rain until the front passes, after which skies should clear and breezy winds will pick up out of the west. Right now our forecast for Sunday is a bit like one of those Easter eggs that you dye one-half in blue coloring, and the other half in red. The first part of the day before the front will be one way, and the other part the other way. Sadly, we can’t pinpoint down the timing of the front yet. I know that’s about as helpful as when I dropped my older brother’s beautiful blue egg he’d just made into the yellow coloring cup. “Accidentally,” of course.

There’s some mighty fine weather ahead if we can get through Saturday. (Weather Bell)

After the front passes we can expect some sweet, spring-like weather for at least the first half of next week, with highs probably in the 70s, and lows in the 50s.

19 thoughts on “Strong storms possible this evening in Houston”