After a mostly cloudy Thursday, expect sunshine to return in force today and for much of the upcoming weekend. Buckle up for a mini-temperature roller coaster though, as we crank the heat this weekend before our next cold front on Monday.

Out in the Gulf, we have Potential Tropical Cyclone 16 chugging off to the northeast this morning. 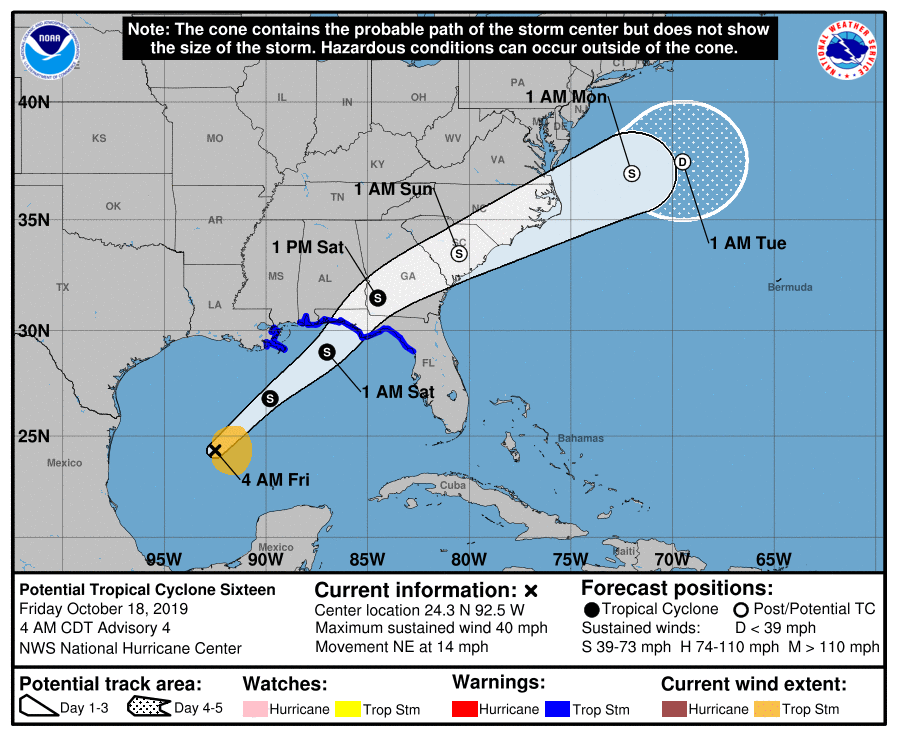 The National Hurricane Center says PTC 16 will race off to the northeast toward the Florida Panhandle by tomorrow morning. (NHC/NOAA)

While it won’t directly impact southeast Texas, behind it, dry air is locking into place over our area. Other than a few lingering clouds south and east of Houston this morning, that spells sunshine today. Look for temperatures to be pleasantly warm and pop up to the low-80s this afternoon. Clear skies tonight may allow for a little patchy fog to develop in inland parts of the region. After that lifts on Saturday, we will see sunshine and temperatures warm up from the lower or middle 60s into the mid- to upper-80s. A stray shower is possible toward evening, mainly south of Houston.

Sunday should see a mix of sun and clouds, though the clouds will gradually populate more of the sky on Sunday afternoon. A few showers can’t be entirely ruled out on Sunday, as a more aggressive push of warm air off the Gulf lifts north. 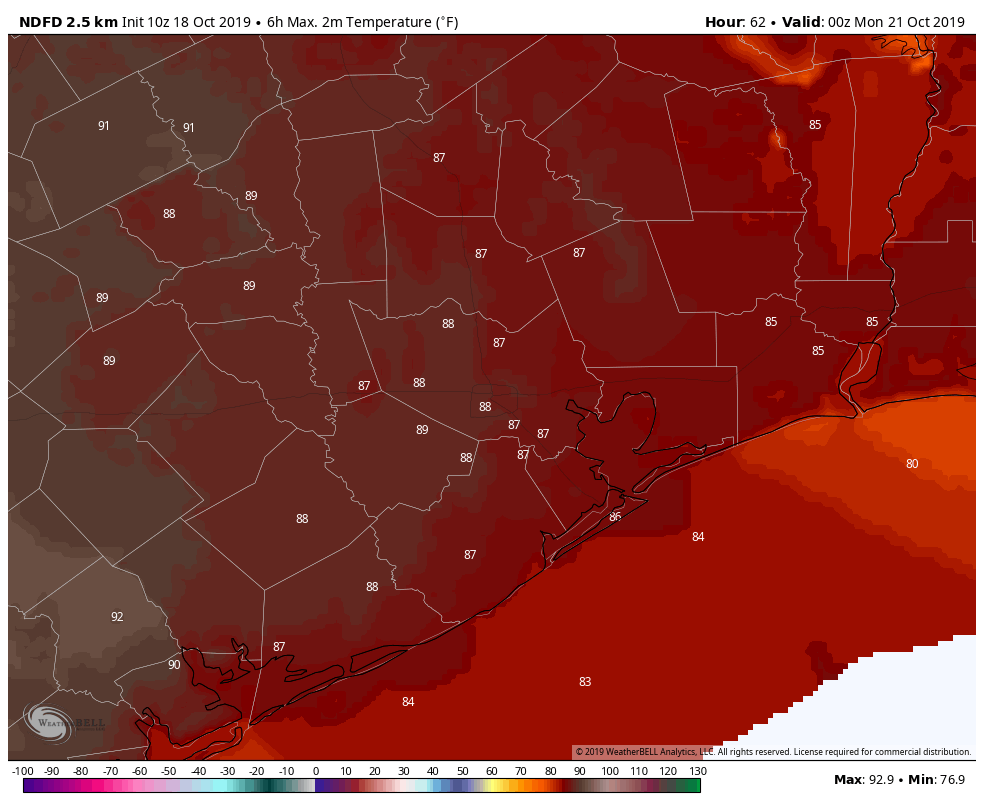 High temperatures on Sunday look more like late summer than autumn, with mid- to upper-80s across most of the region. (NWS forecast via Weather Bell)

It will feel like late summer on Sunday, with temperatures warming from near 70° in the morning into the upper-80s Sunday afternoon. Some spots could top off around 90 degrees or so.

Monday will be a cold front day. While the timing of the front is still a bit TBD, I would expect at least scattered showers or even some strong thunderstorms on Monday morning for your commute. With the front itself, be it in the morning or early afternoon, expect a line of thunderstorms to plow through. We don’t expect widespread severe weather, but we will need to watch for some strong storms I think. Hopefully everyone gets a bit of rain from this, especially on the west side where drought continues to expand. The forecast suggests about a half-inch to inch of rain on average, with perhaps a little more south and east. 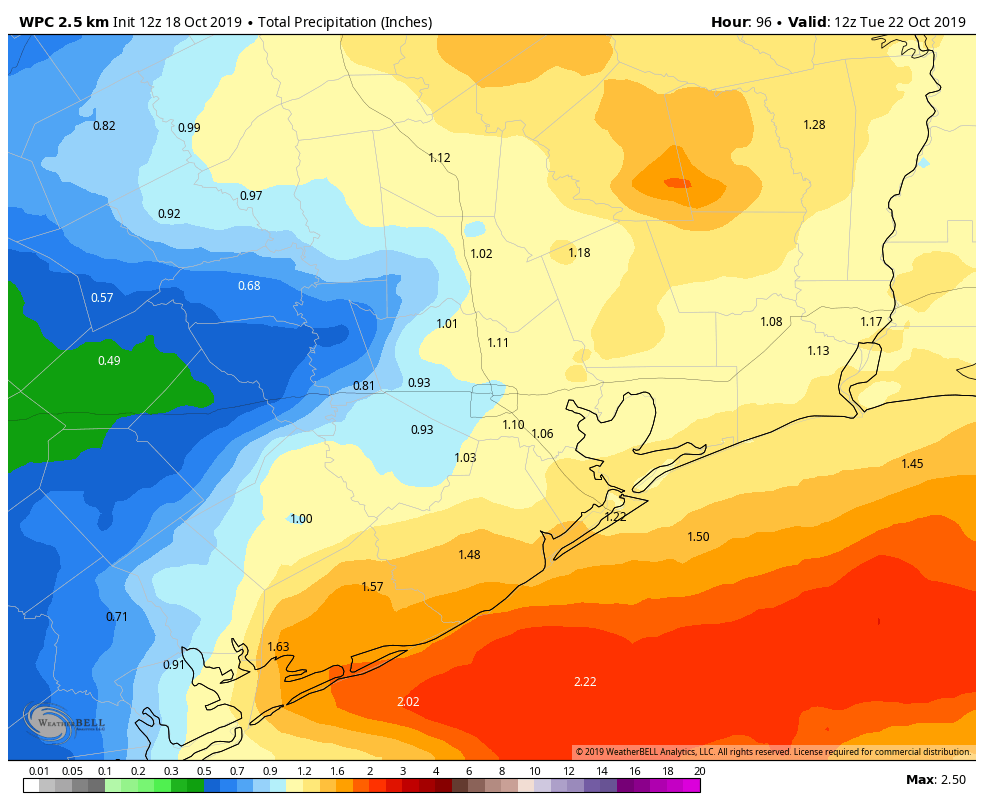 The current forecast calls for a widespread 0.5″ to 1″ of rainfall Monday. A few places may see more than that. (Weather Bell)

Cooler, drier air will rush in behind the front. Expect high temperatures early in the mid- to upper-70s, falling into the 60s with the frontal passage. We should see some PM clearing and recovery of temperatures, along with a gusty north wind.

We should see 50s over most of the area by Tuesday morning, a pleasant fall morning. Highs in the 70s should follow. We will see nice weather continue on Wednesday. Onshore flow returns for Thursday and Friday ahead of another cold front. We’re going to watch this next front closely, as models have been indicating that we could see our first morning of widespread 40s this season behind that one. Stay tuned!

For the all important potential clinching game this evening at Yankee Stadium in New York, look for clear skies, temperatures in the 50s again, and much less wind than last night. It may still be a bit breezy to start the game, but winds should drop to 5 to 10 mph or so, less of a factor, during most of the game, generally blowing from left to right field. That said, with Verlander on the mound tonight, we’re calling for about an 80 to 90 percent chance of heavy champagne showers in the Astros locker room at some point after 9 PM or so. Go ‘Stros!

12 thoughts on “Sunshine returns as the mercury rises this weekend”