With clouds and rain Thursday, we managed to only hit 48° for a high temperature. That was the third consecutive day of Houston not getting above 50°. When is the last time that occurred in November? That would be November 27 to 30, 1952. 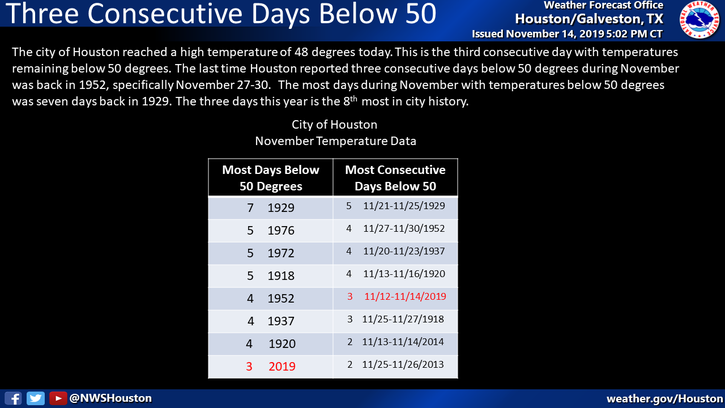 We have not had a cold snap of this length in November since 1952. (NWS Houston)

No, the winter of 1952-53 was not especially cold. Houston only saw 3 nights of freezing temperatures after that November, none colder than 27°. One of the popular questions we’ve received is whether or not this cold weather so early means a cold winter. The unsatisfying answer I have to give you is that you simply can’t draw many conclusions about the subsequent winter based on this early season cold. It is just difficult to correlate it in either direction. But by any measure, this was one of the more powerful early season cold air masses in the U.S. in some time.

Now, we can discuss warming up a bit.

Skies mostly cleared out overnight, and that has allowed fog to develop in many parts of the area. 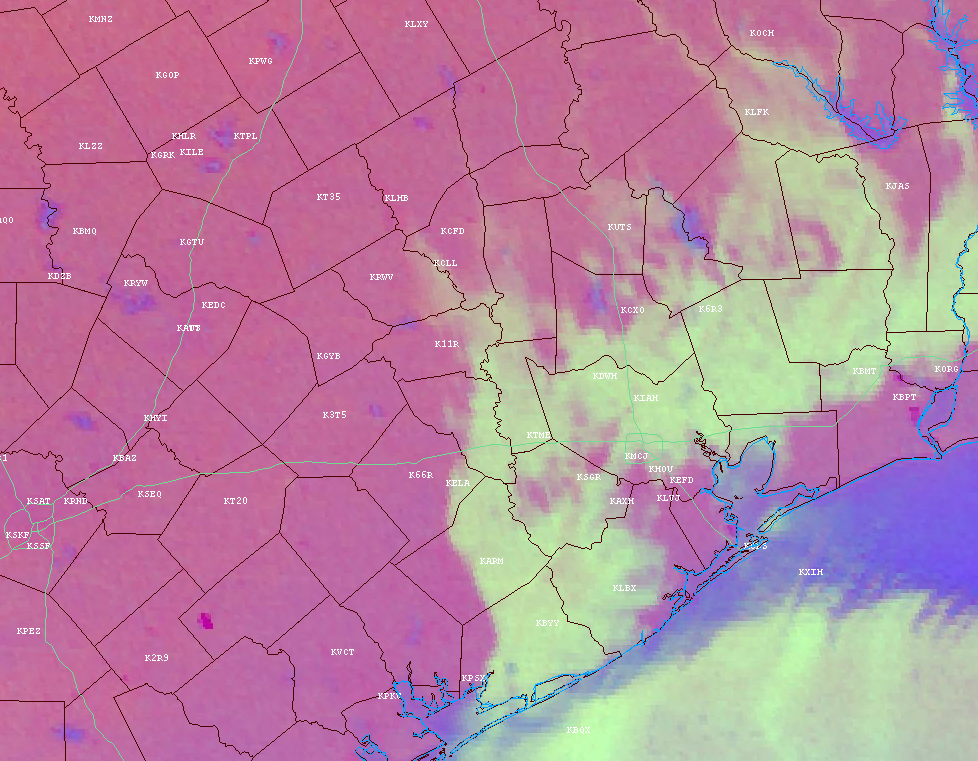 Bright colors on this satellite image indicate fog, which is scattered about as of 5:45 AM. (College of DuPage)

Fog should dissipate over the next few hours, and by mid-morning we should be seeing the sun poke back out. Look for ample sunshine the rest of the way and high temperatures sneaking up into the upper-50s this afternoon. Break out the shorts, y’all!

With clear skies, light winds, and a relatively dry air mass tonight, we should see temperatures actually get rather chilly again. 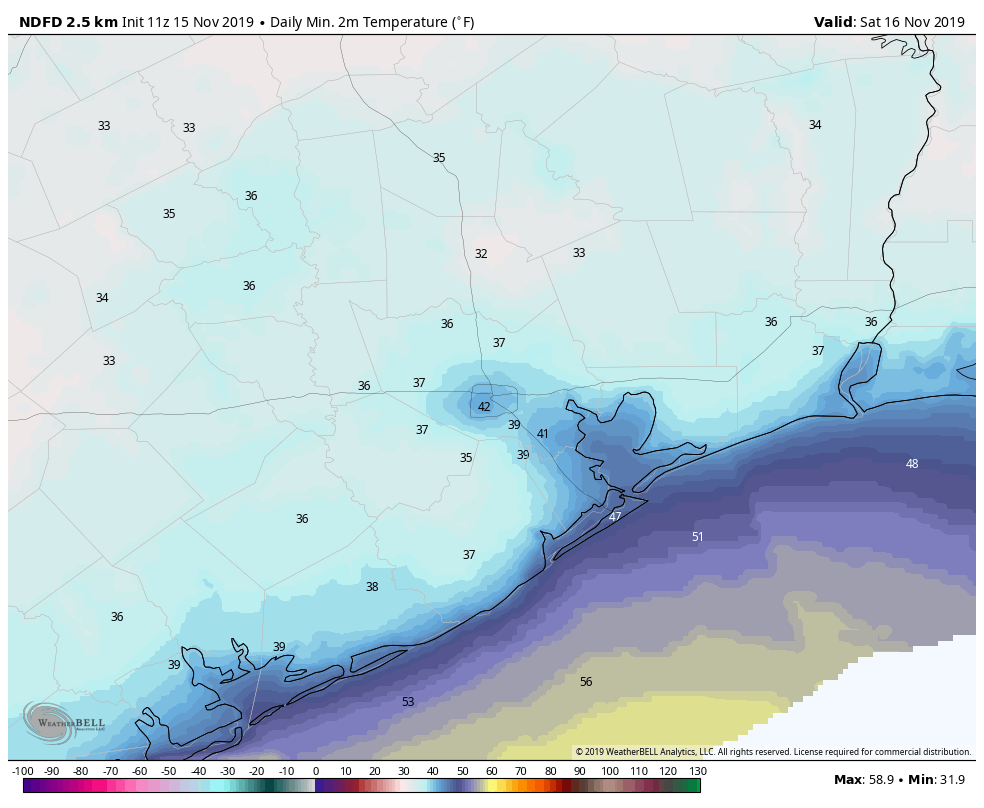 Another cold night is expected tonight with low temperatures running about 10 to 15 degrees colder than normal. (Weather Bell)

Expect upper-30s to around 40 or so in the city of Houston. Outlying suburbs will likely dip into the mid-30s. Folks way up north toward Cleveland or Conroe or Magnolia may drop to near-freezing. On the coast, look for Galveston to bottom out in the mid-40s.

Saturday itself looks lovely with sunshine and high temperatures around 60° or so. Expect Saturday night to be clear and chilly once more. Low temperatures will be about 3 to 5 degrees warmer than tonight, however. Look for around 40 in the city, mid- to upper-40s at the coast, and upper-30s in the northern and western suburbs.

Sunday will see mainly sunshine. A few extra clouds could sneak in throughout the day though. Otherwise, that’s it. Expect mild temperatures, with highs pushing into the mid-60s.

A few things will be going on in the background Monday and Tuesday, but overall you’ll just notice sunshine. It will be a nice start to the week with temperatures going from the upper-40s into the upper-60s, if not 70+ on Monday. Tuesday will be our first legitimate warm day in some time. We should be able to get up close to 75° both Tuesday and Wednesday with ample sunshine both days. Thursday could be even warmer. Some fog may begin to become an issue at the coast around this time. Our next cold front looks to be in the Friday/Saturday timeframe. Expect a few showers or storms then, but nothing too serious. We should see a return to cooler weather next weekend.

I just want to add a reminder that our annual fundraiser kicked off yesterday. You can either donate or choose from a couple awesome t-shirts or an umbrella. Thank you so much to those who are able to contribute. To all our loyal readers, I just want to echo Eric’s sentiments from yesterday and offer a sincere and very big thank you. Eric and I try our hardest to make sure we’re giving you what you need, and your support and encouraging words throughout the year mean so much to us and keeps us going. I have a backlog of ideas and things I want to accomplish in tandem with Eric, and I am hopeful that I can begin checking some boxes in 2020 to keep you coming back beyond the forecast! Thank you so much again.